Lionsgate Home Entertainment // PG-13 // February 10, 2009
List Price: $39.99 [Buy now and save at Amazon]
Review by Stuart Galbraith IV | posted February 6, 2009 | E-mail the Author
Oliver Stone's W. - as opposed to Richard Quine's W* - is a vaguely lacking but frequently fascinating and occasionally dead-on portrait of now ex-President George W. Bush and his administration. It doesn't have the go-for-broke damnation of the similarly star-studded JFK nor the cinematic flourishes of The Doors. Indeed, the biggest surprise about W. is how conventional it is compared with Stone's other political films, though in some respects W. is "misunderestimated." Some of Bush's detractors complained the film is too forgiving and sympathetic toward its protagonist. In fact, it's really a small-scale, intimate film that attempts, mostly successfully, to explain (though hardly justify) Bush's emotionally detached yet needy psyche, one that's self-involved yet at the same time not self-reflexive. Any experienced screenwriter or director will tell you it's hard to make a movie where its main character steadfastly refuses to change, bend, or yield throughout the story (though Bush does get sober and finds God, the defining moment of his life); that the filmmakers succeed as well as they do is impressive.

The film looks and sounds good on Blu-ray and the extras, all in high-definition, are unusually interesting. 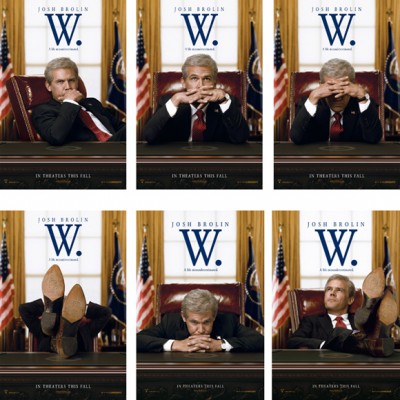 W. (2008) moves freely back-and-forth through time, concentrating on the build-up to the Iraq War during 2002-03, inter-cut with scenes from George W. Bush's (Josh Brolin) early life, from his alcoholic initiation at a Yale fraternity to his inauguration as Governor of Texas. Significantly, there are no scenes of the 9/11 tragedy or its immediate aftermath, no mention at all about the contested 2000 presidential election, and little or nothing about numerous other scandals such as Enron and Jeff Gannon, the gay hustler-turned-conservative White House Press Corps plant. (The filmmakers have an admirable eye for detail throughout, however. At a press briefing, they carefully cast an extra to sit front-row-center who resembles veteran reporter Helen Thomas. Other little touches like this abound.)

Surprising too is that W. (meant to be pronounced "dubya," as opposed to "double-u") uses very little actual news footage - one would have expected more ironic cutting along the lines of Michael Moore's Fahrenheit 9/11 - and rarely does it use CGI and other visual tricks to insert Bush into defining events, though there is a brief scene aboard the aircraft carrier where the infamous "Mission Accomplished" banner was hung.

The film basically tells two stories, one about an aimless, unambitious alcoholic living in his famous father's shadow. War-hero and devoted patrician George H. W. Bush (James Cromwell) is constantly pulling strings and securing one job after another for his egregiously unfocused, irresponsible son, who embarrasses him with his heavy drinking and arrests. W. desperately wants his father's approval, but in W.'s eyes "Poppy" is lavishing all his praise on Jeb (Jason Ritter), W.'s younger and more responsible brother.

The effects of this strained relationship manifest in W.'s dealings with his Machiavellian cabinet, each jockeying for control and influence: Vice President Dick Cheney (Richard Dreyfuss), Secretary of Defense Donald Rumsfeld (Scott Glenn), National Security Advisor Condoleezza Rice (Thandie Newton), Secretary of State General Colin Powell (Jeffrey Wright), White House Chief of Staff Karl Rove (Toby Jones), and CIA Director George Tenet (Bruce McGill). In dealing with the intellectually vacuous, uncurious president, by this time a recovering alcoholic deluded into thinking he's carrying out "God's will," they're almost like the Roman Senate trying to cope with Caligula or Nero. In key scenes with Cheney (in getting Bush to sign-off on torture) and in a flashback with Rove, they push the insecure Bush a little too far and, detached like Reagan and paranoid like Nixon, he asserts his authority as "the Decider."

Movies about sitting U.S. Presidents and their inner circle are extremely rare, partly because suspending disbelief with actors imitating (or not) familiar, contemporary figures, leaders that have become daily fixtures on CNN, Fox News, and CNBC is all but impossible. The performances in W. are all over the map, from simple grotesque caricatures to uncanny embodiments.

Brolin's main accomplishment is that he quickly becomes perfectly acceptable and believable in the title role. Some condescending reviews have likened the performances to those on a Saturday Night Live sketch, but Stanley Weiser's screenplay and the nuances of actors like Brolin flesh them out in new, sometimes unexpected ways. Though political junkies likely will not learn anything new about Bush, his family, and his administration, the family's psychology is given a fresh, plausible examination.

An exception to this is Elizabeth Banks' Laura Bush, who comes off as too generic and two-dimensional; her character begins and ends with a fierce loyalty and patience for her husband. (I've long heard about Laura's secret chain-smoking, at times requiring handlers to fumigate her smoke smell prior to state events, and a self-contained glass booth-thingy to accommodate her addiction. There's no hint of this in the film.) James Cromwell looks nothing like Bush Sr. though delivers a fine performance anyway. Supposedly the role was first offered to Warren Beatty and Harrison Ford. Cromwell is a better actor, though he's been cast in these types of roles a little too often. (He played the Secretary of the Treasury in Deep Impact, the U.S. President in The Sum of All Fears, Lyndon Johnson in RFK, and Prince Philip in The Queen.) I'd have liked to seen more of Ellen Burstyn as Sr.'s feisty, outspoken wife, Barbara.

By far the film's best performance comes from Richard Dreyfuss, who largely through calm icy stares from the sidelines all but becomes Dick Cheney. Whether discussing the use of torture over banal lunchtime conversation while picking at a cottage cheese salad, or patiently tolerating Bush's juvenile simplification of complex issues, Dreyfuss's VP exudes arrogance and unchecked power. Without saying very much, he's quite chilling. (It's also amusing to see one of Hollywood's most liberal actors playing one of the nation's most conservative VPs, but at 61 Dreyfuss looked a lot more like the character he was playing than some of the other key actors.)

Also notably good are Scott Glenn as Donald Rumsfeld, whose incoherent folksiness only thinly veils conniving war-mongering; Dickensian British actor Toby Jones is appropriately freakish, almost like a SPECTRE villain in a James Bond film, as Karl Rove. Veteran actor Stacy Keach is an especially welcome presence and very good as Bush's Christian minister, a composite figure. Thandie Newton affects a way over-the-top but enjoyable imitation of Condoleezza Rice, though her nasally voice is more appropriate to Lily Tomlin's Ernestine the telephone operator than Rice's way of speaking, which always sounds like an exasperated librarian talking down to a bunch of unruly schoolchildren. Unfortunately, Welsh actor Ioan Gruffudd is horribly miscast as Tony Blair, and Jeffrey Wright, a fine actor normally, is never believable as Colin Powell, a key role in the film. Wright was probably too young for the role.

Filmed in 2.35:1 Panavision/Super 35 in what might be considered Fujicolor, W.'s 1080p transfer is on a 50MB disc that's up to contemporary standards. The colors, clarity, and contrast are all up to par for a 2008 release, though it's not especially impressive in any way. The disc itself is preceded by around 12 minutes of endless trailers, all in high-def but of limited interest, and viewers can only skip ahead to the next one and not directly advance to the main menu, which is rather annoying. (For the record, the trailers are The Haunting of Connecticut, New in Town, The Doors, Rambo, and Lord of War, the latter three home video trailer-promotions. The disc is Region-A encoded.

W.'s 7.1 DTS HD Master Audio serves the film well, though the film's intimate nature doesn't necessitate a lot of directional audio, either. The mix mostly comes alive with Stone's use of '60s-'00 popular music, with some obvious choices ("What a Wonderful World" makes its umpteenth appearance, though not the Louis Armstrong version), some curious, such as the theme song for the 1950s British TV series The Adventures of Robin Hood ("Robin Hood, Robin Hood, riding through the glen, Robin Hood, Robin Hood, with his band of men; Feared by the bad, loved by the good, Robin Hood, Robin Hood, Robin Hood!"). A French 5.1 Dolby Digital mix is included, along with optional English and French subtitles, and English SDH.

Supplements include an audio commentary by director Oliver Stone. Typical of Stone's commentaries, he's an articulate, methodical, and logical speaker (regardless of whether you agree with him or not) and his comments are worthwhile. The remaining extras are all in high-definition: Dangerous Dynasty: The Bush Legacy, directed by son Sean Stone, runs 18 short minutes; I wish it were a good hour longer. News clips of Bush are inter-cut with excellent commentary by Howard Zinn, John Dean, William Blum, Sanford Levinson, Kermit Roosevelt III, Elizabeth Holtzman, Robert Novak, Peter J. Kuznick, Ramsey Clark, Gore Vidal, and Marcus Raskin.

No Stranger to Controversy: Oliver Stone's George W. Bush runs 16 minutes and features interviews with Stone, Weiser, and Brolin. At the end Stone half-jokingly (?) toys with filming a fantasy end title sequence in which Bush and all his cronies are shackled together in The Hague, awaiting a Nuremberg-style war crimes trial. If only. "W." Filmmakers' Research and Annotations Guide runs 88-pages, and would have made a worthwhile pop-up special feature to have run concurrent to the film. Also included are Deleted scenes with optional director audio commentary is interesting; included is an elaborate dream sequence of a giddy Bush riding a magic carpet over a burning Baghdad. The film's exceptionally good trailer rounds out the package.

In the end, W. is a portrait of an unhappy man who in the process of trying to win his father's approval, and later in serving to a higher Father - but unaware of his own inadequacies - only succeeds in dismantling his family's reputation, such as it was, nearly destroying his country in the process.