Fox // R // February 3, 2009
List Price: $29.99 [Buy now and save at Amazon]
Review by Stuart Galbraith IV | posted February 12, 2009 | E-mail the Author
A superb, character-driven drama-comedy at times almost awesomely insightful, Sideways (2004) is the most fully-realized work yet from director/co-writer Alexander Payne, maybe the best American filmmaker to come along since Jonathan Demme and Jim Jarmusch back in the early/mid-'80s. Like Payne's terrific Election (1999) and About Schmidt (2002), Sideways explores dark, unseemly but utterly common (if not universal) aspects of human behavior few filmmakers anywhere in the world will touch, in settings mostly satirizing middle-class suburban life with dead-on precision and wit.

For this reviewer, Payne's films have been almost revelatory. Watching Sideways for the first time at a theater in 2005, my reaction was, "My God - I know all these people!" Its four main characters were immediately recognizable with the distinctive traits, attitudes, appeal and failings of close friends, to say nothing of yours truly. Sideways is powerful because it strikes a recognizable chord accessing profound, sometimes hidden emotions and conflicts we sometimes think no one else experiences.

It reminds me a lot of growing up in suburban Detroit (which then uncannily resembled the city in the opening scenes of About Schmidt), at a time when I assumed all the families living in those cookie-cutter ranch houses were all like the Cleavers, the Andersons, and the Nelsons (to name three idealized sitcom families). Entering one of these Little Boxes-like homes, a friend of a friend's, what I saw just inside the door left me nonplussed: floor-to-ceiling piles of garbage: old newspapers, spoiled food, mountains of cigarette ash, a jumbo-sized metal trash can in the middle of the room. The backyard was even more incredible: a veritable jungle straight out of Tarzan, the family hadn't tended to their backyard in probably 30 years. The weeds were as high as an elephant's eye; you just about needed a machete to hack your way to the back fence. And I thought my family was messed up. Sideways taps into that same largely unmined territory, striking a perfect balance of pain and hilarity, bitterness and hopefulness. It's a great American movie.

Fox's Blu-ray offers the film in high-definition and 5.1 DTS-HD Master Audio for the first time but the extras, good as they are, in fact are all carryovers from the April 2005 DVD. 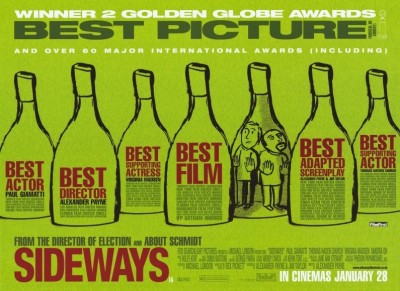 Miles Raymond (Paul Giamatti) is a junior high school English teacher and an aspiring novelist but his great passion is wine, for which he has a connoisseur's palate and encyclopedic understanding. Bitterly, recently divorced from a similarly appreciative oenophile, Miles is consumed with depression and self-loathing. His nerves on edge as he awaits news about the fate of his magnum opus with a niche publisher, Miles arranges a week in the Santa Ynez Valley wine country with his still-handsome college roommate, Jack Lopate (Thomas Hayden Church), a former soap opera actor about to marry into a wealthy Armenian family.

Miles merely wants to taste wine, eat good food, and play a little golf but Jack, soon to be a married man, is determined to get laid and actively encourages Miles to do likewise. Jack is surprised to see Maya (Virginia Madsen), a waitress at Miles' favorite restaurant, display an obvious interest in Miles, and she's a knowledgeable wine enthusiast to boot, but the terminally depressed Miles dismisses both her (she's just a waitress) and his own chances. Nevertheless, when Jack picks up flirty bartender Stephanie (Sandra Oh) at a nearby winery - keeping news of his impending marriage to himself, of course - they arrange a double-date at a restaurant with Maya and Miles.

Sideways is so good on so many levels, it's hard to know where to begin to extol its virtues. Despite several hilarious scenes where Miles has a mental meltdown, Sideways throughout is painfully honest and realistic about the way people sabotage their own lives and hurt one another. Miles and Jack are likeable but at times reprehensible. Just when the audience is thinking that perhaps they're in for a good but standard buddy/road movie Miles stops off to visit his 70-something, doting mother (Marylouise Burke) - and sneaks upstairs to steal about a grand from her hidden stash of money.

Jack is so breezy and upbeat - and blissfully ignorant of his own amorality - that he's hard not to like, and yet late in the film he has an unexpected breakdown so infantile that it creeps out Miles...and the audience.

Miles is a fascinating character, and Giamatti's incredibly nuanced performance conveys every subtle emotion. One of the screenplay's best achievements is that without ever saying so directly expresses Miles' feelings of absolute isolation: there's no one he can relate to completely. Jack is a close friend but he's also an idiot when it comes to wine. Maya is a wine expert but can't fathom the subtleties of his sincere but long-winded novel, The Day After Yesterday. ("Oh," Maya says, "So you mean - today?")

He still clings to a faint but actually nonexistent hope of getting back together with his ex-wife, who came closest to being a true soul-mate ("the best palate of any woman I knew"), and a lot of the drama pivots on his rage when Jack reveals that she's already remarried.

Of course, Miles' obsession with wine is to some extent a means to an end, a way to bury his deep depression in an obsessive hobby/lifestyle, the kind of thing one often (though not always) sees in fandom/collecting of all kinds: coins, dog shows, Star Trek, Civil War buffs - you name it. The delicate expression of this, the literary linking between the lives Miles and Maya lead and the wine they love is exquisitely expressed. Exploding with raw emotion in one scene, Miles ends up in a vineyard where he's stopped dead in his tracks by the beauty of grapes he gently cradles.

Some of this is obvious but all of it is beautifully written. When Miles talks to Maya about his passion for Pinot Noir, he's really talking about himself, describing it/him as "a hard grape to grow," "thin-skinned" and "temperamental" but full of potential and ultimately a rare breed.

I also admire the film's ability to capture honest emotion so precisely: Miles struggling to be polite and upbeat at the dinner party when he's actually depressed and ready to bolt; the exact moment when Miles falls in love with Maya; the awkwardness of their partings; Miles losing control (several times); Stephanie's understated compulsion to push Jack toward a long-term commitment, and her raw anger when she learns of his deception.

(Sideways was written by Payne and his longtime writing partner, Jim Taylor, and adapted from a then-unpublished novel by Rex Pickett.)

Though it grapples with dark human emotions, Sideways is also screamingly funny at times. The grotesque "Frass Canyon" winery visit is a highlight; "frass" means insect excrement. It was filmed at the Fess Parker Family Winery and Vineyards in Los Olivos.* Late in the film Jack is desperate to salvage his weekend with a last-minute fling with an overweight, ordinary waitress, leading to an extremely funny side adventure (offering a peak inside the kind of suburban tract houses mentioned earlier.) 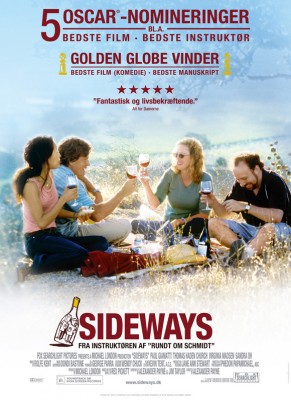 The 50GB dual-layered Blu-ray disc of Sideways is an upgrade from the standard-def DVD, but don't expect the kind of visual/aural leap one finds in discs like 2001 or Grand Prix. Presented in true 1.85:1, the film (processed by Fotokem, with theatrical prints by DeLuxe) exhibits a lot of fine grain, but pleasingly so. It's an accurate reflection of the theatrical release, with good but not overwhelming color and contrast.

Originally in DTS and Dolby Digital in theaters, the Blu-ray offers a 5.1 DTS-HD Master Audio mix that has a surprising amount of directionality (from the first scene, in fact) but mainly benefits the film's great jazzy score. 5.1 DTS tracks are available in Spanish, French, and Portuguese, as well as subtitles in those languages plus Korean, Cantonese, and Mandarin.

The feature is preceded by high-definition trailers (altered slightly to plug their Blu-ray editions) for Little Miss Sunshine, Napoleon Dynamite, The French Connection, and The Boondog Saints (the latter 4:3 for some reason).

All from the older DVD, the supplements are an audio commentary with Paul Giamatti and Thomas Haden Church, 7 Deleted Scenes, and a short behind-the-scenes featurette. The commentary is the real surprise here - oftentimes actors don't have a lot to say on these things, but Giamatti and Church light-heartedly provide what's almost a literary reading of the film, pointing to all sorts of wonderful little touches, things along the lines of the barcode visible on the store-bought flowers Miles presents to his mother, or draw parallels between Miles' love of wine and aspects of his own life, etc. It's a surprisingly worthwhile listen.

Though it's not a giant leap from standard-def DVD to Blu-ray and the lack of new supplements is disappointing, Sideways itself is one of the best films of the last decade, and a DVD Talk Collector Series title.