Universal // R // March 10, 2009
List Price: $29.98 [Buy now and save at Amazon]
Review by Stuart Galbraith IV | posted March 16, 2009 | E-mail the Author
Though one senses at times a film all too aware of its own social significance, Brokeback Mountain (2005) generally is an impressive, sensitive, and well-acted drama, an unusual modern Western faithfully adapted from the O. Henry Apaward-winning short story by Annie Proulx. The film stars Heath Ledger and Jake Gyllenhaal as itinerant cowboys sexually and emotionally drawn to one another, and it follows their complex relationship over two decades beginning in the early-1960s.

The Universal Studios Home Entertainment Blu-ray release of this Focus Features/River Road Entertainment production is somewhat disappointing: the image, rather unaccountably, is on the soft side throughout, and the audio is problematic. Possibly due to a combination of the mixing and the actors' frequently mumbled line readings, this reviewer often resorted to the English subtitles to catch all the dialogue. All of the extra features are derived from the April 2006 standard DVD release and January 2007 2-Disc Collector's Edition DVD , though the Blu-ray version has a BD Live option. The Blu-ray appears virtually identical to a HD DVD release, also from January 2007, though the 5.1 Dolby Digital audio on that has been bumped up to DTS-HD Master Audio for Blu-ray. 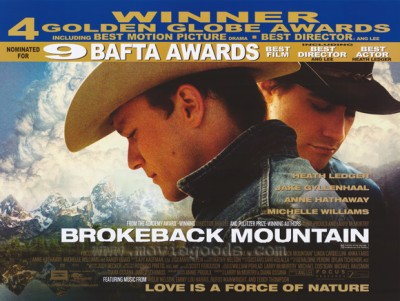 In 1963 Wyoming, drifters Ennis del Mar (Ledger), a poor and uneducated but experienced ranch hand, and Jack Twist (Gyllenhaal), a less mature failed rodeo cowboy, go to work for sheep rancher Joe Aguirre (Randy Quaid). Theirs is a lonely job; the two spend the summer alone and isolated high up (in the fictitious) Brokeback Mountain, with little to do but work and sleep. One evening the two men, huddling together on an exceptionally cold night, engage in passionate sex. Though Ennis especially does not consider himself to be gay, they can't help but continue their relationship for the remainder of the job.

However, when the summer is cut short they simply go their separate ways. Ennis marries his longtime fiancée, Alma (Michelle Williams) and together they raise two daughters, while Jack eventually marries farming equipment heiress and rodeo princess Lureen (Anne Hathaway). However, even after several years of conventional family-rearing the passion Ennis and Jack feel for one another refuses to subside and, four years after their first meeting, the two begin a series of long but irregular "fishing trips" away from their families, all the while struggling to keep the true nature of their relationship secret.

Brokeback Mountain gets off to a pokey start, partly because these reticent cowboys, particularly Ledger's character, are men of few words. Largely told from Ennis's perspective, he can't get a handle on his complex feelings toward Jack, and makes little effort to express or discuss it. They're isolated, cut off from the rest of the world, trying to suppress innate inclinations and attractions and later, embarrassed, Ennis tries to dismiss what happens as a one-time aberration. Obviously, the most striking thing about Brokeback Mountain is its contrast between the manly-man image one has of the authentic American cowboy with its tender, gay/bisexual love story, so tender that profound emotion revolves around the symbolic value of a worn shirt. Taiwanese director Ang Lee plays up this contrast too strongly in the early scenes, romanticizing the American west and the nobility of the professional cowboy out of proportion. Later on the film more successfully adopts a style closer in tone to Larry McMurtry's novel and film of The Last Picture Show. (Not coincidentally, McMurtry co-adapted Proulx's story with co-producer Diana Ossana. Quaid also appeared in the 1971 film.) Like Last Picture Show, once off that mountain and back into the rural communities of Wyoming and Texas, the bleak and unrewarding lives the characters lead is palpably realized.

The two actors (as well as Quaid, for that matter) are quite good; the Australian Ledger seems to be channeling a young Tommy Lee Jones in his performance and Gyllenhaal is a bit too slight of build to be entirely believable as an experienced cowboy, but overall both are authentic and emotionally spot-on, and one never gets the sense of the actors holding back during the sex scenes.

What's most impressive about both their performances, particularly Ledger's, is that though only in their mid-20s at the time, they convincingly age into their mid-40s. Though subtle, it's clearly aging makeup yet the slight shifts by the two actors sell it and make it totally believable.

Williams and Hathaway are equally fine as their wives. Williams's Alma discovers her husband and Jack making out early in their marriage but never confronts him with it until after they're divorced, the anger building up over many years. In a neat bit of writing, Jack assumes his wife has no idea about his affair with Ennis, but a scene near the end subtly proves otherwise.

Brokeback Mountain impresses with its complexity. For instance, no matter that Ennis and Jack love one another and are compelled to keep their relationship secret not just from their families but their archly conservative communities generally, there's no attempt to justify the pain they cause their wives.

And yet this is not so much out of irresponsibility on their part, but rather because the characters are living in a time and place where such relationships are simply not permitted, taboo to the point where society wants to deny its very existence, or stamp it out utterly, like the plague, when it does appear. (Hence the film's brief flashback to Ennis's childhood, where his father shows him the mutilated body of a murdered gay man.)

This isn't a message film at all, but rather a sad love story that happens to be about two man who find meaning in something society won't permit. It's more about feelings and emotional longing than it is about sexual orientation; some controversy arose after its release in a debate about whether the characters were gay, bisexual, straight men who fall in love or something else entirely (insofar as some reviewers have struggled to explain the relationship by inventing brand-new forms of sexual orientation). In one sense the debate is pointless, because the movie is what it is - it's all there, onscreen. The movie is frank about their sexual relationship without being exploitative; it makes no bones that they're having sex, but possibly Jack and certainly Ennis would have trouble categorizing their relationship.

Brokeback Mountain is presented here in a 1080p/1.78:1 (not 1.85:1, as stated on the packaging) transfer on a BD-50 disc. The image is on the soft side, so much so I wondered if perhaps this was shot on high-def video and manipulated to look like film, though apparently it was shot in standard 35mm, with lab work by DeLuxe. Fine details appear in some shots but overall I found the transfer lacking, when compared to, say, Lonesome Dove and Broken Trail, both made for TV.

The DTS-HD Master Audio 5.1 delivers in terms of sound effects; booming thunderclaps and a hailstorm on Brokeback Mountain are very impressive aurally, but I also had trouble catching much of the dialogue for no clear reason. Several times I found myself going back and flipping the English subtitles on to catch lines of dialogue lost through some combination of the actors' mumbling of lines (including the film's very last line, too) and the sound effects and/or music track drowning out important dialogue. DTS 5.1 tracks in French and Spanish are included, along with subtitles in those languages.

Supplements from the 2006 DVD include four short featurettes: On Being a Cowboy, Directing from the Heart: Ang Lee, From Script to Screen: Interviews with Larry McMurtry and Dianna Ossana, and Sharing the Story: The Making of 'Brokeback Mountain'. From the 2007 2-Disc DVD: A Groundbreaking Success, Music from the Mountain, and Impressions from the Film. Like other Universal titles, and like their older HD DVDs, the disc comes with a book-marking option and My Scenes can be uploaded via the BD Live option.

Though I was disappointed with Brokeback Mountain's first third, its story and characters gradually grew on me and I was surprised to find myself totally engrossed during the last half-hour. Whether it speaks to gays and bisexuals or if it positively changed any socially conservative minds I cannot say, but as a drama about two characters who love one another but, tragically, cannot enjoy it openly or share it with others, Brokeback Mountain is compelling and impressively honest. Highly Recommended for the movie, less so for the transfer and the recycled extras.