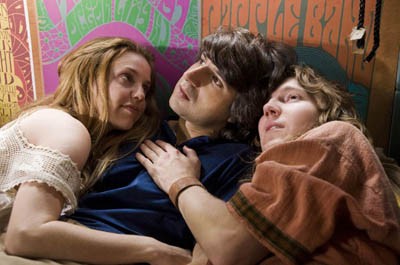 There is a scene 2/3 into Taking Woodstock where Demetri Martin's character, Elliot Teichberg, climbs into a van driven by a couple of California hippies and takes what is presumably his first tab of acid. The other two start tripping almost immediately, and as he watches them writhe around in their own personal ecstasy, Elliot wonders why he's not having a good time, too. It was at that moment that Elliot and I were one, where I finally began to identify with his character. I felt very much the same way when watching Taking Woodstock. The people up there on the screen were having fun, when was I going to start having fun?

Taking Woodstock is the new film from Ang Lee, the man who excavated 1970s suburban ennui in The Ice Storm and the hidden passions of overly stoic men in both the first Hulk and Brokeback Mountain. In his new movie, he takes a light comedic approach to adapting the real-life memoir of Elliot Tiber (the book was co-written by Tom Monte, the movie scripted by Lee's regular writer/producer, James Schamus). Tiber was a Jewish artist who used the 1969 Woodstock concert to turn the ailing fortunes of his family's Catskills hotel. Seeing that the music festival kept losing its location, Elliot set up a deal where the promoters would stay at the Tiber's low-rent resort and put on the show at a nearby dairy farm. Taking Woodstock is the story of how it all came together.

It's also the story of how Elliot and the Teichberg family experienced a personal sea change as a result of the influx of hippies on their little town. Lest we forget, Woodstock changed lives, man. These things happened, they were important, and the people who experienced it knew it back then just as much as we do now. Hence all the knowing fortune cookie homilies that riddle this cookie-cutter script. While I can't speak to the veracity of Teichberg/Tiber's original account, or how much of this movie matches his book, as cinema, the Taking Woodstock narrative is one '60s cliché after another. The uptight young man who can't quite fit in this new world (Martin), the fussbudget Jewish mother (Imelda Staunton), the newly returned Vietnam vet suffering flashbacks (Emile Hirsch, who here overacts, as opposed to his normal underacting technique), the avant-garde drama students that can't keep their clothes on--it's all here. Each piece has been pilfered from all the movies about the 1960s that preceded this one and set loose to sleepwalk through a bland script born of a comatose imagination. We're even treated to the same old predictable melting colors and infinite horizons once Elliot's acid finally does kick in. There are no new trips here, just ones you've been on countless times before.

As a director, Ang Lee is known for being attracted to stories where his characters are too buttoned up for their own good. He's got a knack for showing the passion that exists below the surface and how it must either bubble up and spill over or the characters will suffer the consequences. Surprisingly, similar themes do exist in Taking Woodstock. Elliot is so square because he is gay, and returning home to help his parents means giving up the more open life of Greenwich Village. His mother is so overbearing because she clings to fears she brought with her when she emigrated from Russia. His father (a marvelous Henry Goodman) never expresses himself, he just quietly goes along. Becoming part of Woodstock means they get a chance to become themselves. As Liev Schreiber's cross-dressing army vet puts it, to know who they are. As they start to come out of their shells, so too does Taking Woodstock. These scenes offer a glimmer of hope, but alas, they are too few, too underdeveloped. They are mere hints of what might have been. 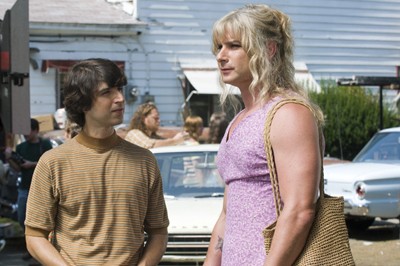 Perhaps the real problem is that this time Ang Lee is too buttoned-up himself. That was the general complaint about his version of Hulk, that the filmmaker didn't have what it took to fully unleash the beast. That may be the problem here, too. He has all the details to work with, but when it comes time to truly get down and party, Lee doesn't have it in him. He's too busy matching the film stock and the split-screen technique of the Woodstock concert film to actually throw himself down in the mud and be a part of what's going on. This makes for an emotionally stillborn film, one lacking in any real drama. How, for instance, does one explain a movie about Woodstock that has hardly any music in it? No wonder there's no energy on the screen. This is Woodstock where the bands forget to show up. It's like watching a war movie without any guns.

Demetri Martin is also woefully miscast as Elliot. While the director makes some good use of the comedian's natural awkwardness, he is really just playing a variation of his TV persona (Martin has been a regular Daily Show contributor and has his own show, Important Things). Neither Lee nor Martin seem to have any idea how to get the performer to open up. It's all blank stares and awkward posture straight through. It's the kind of movie where the supporting actors, who also include Eugene Levy in a fantastic turn as the owner of the dairy farm, are allowed to run circles around the lead. Liev Schreiber, towering over the rest of the cast in his pink dress, owns the movie from the moment he steps into frame. It's him and Levy and Goodman and Staunton that make their mark here.

The roads to Woodstock were varied and crooked, but in Taking Woodstock, it's just a straight line from one end to the other. Though the real event stands as a symbol of free love, hedonism, and the accidental success of a mash-up between 1960s naiveté and oncoming capitalism, under Lee's direction it becomes a perfectly staged event where everything lined up in such convenient fashion it even allows the film to end with a knowing wink to the dark days ahead. The chaos of brown acid and mud people is now a strictly ordered myth where everyone was as innocent in their philosophy as they claimed. They say that if you remember the '60s, you weren't really there, and Taking Woodstock's dully drawn version makes me glad I wasn't. Thanks for the memories, guys, but no thanks.