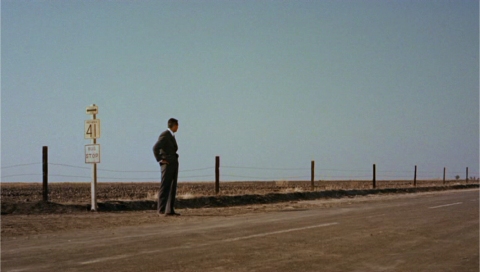 Since I haven't seen them all, it might just be impossible to name my absolute favorite Hitchcock film. Thus far, Rear Window is probably the one I've seen and enjoyed the most for its insular thrills, but it's tough to beat North By Northwest (1959) for sheer viewing enjoyment. This non-stop masterpiece of suspense continues countless themes and story elements explored earlier in Hitchcock's stellar back catalogue: mistaken identity, murder, MacGuffins, mystery and more. Sandwiched in-between perennial favorites Vertigo (1958) and Psycho (1960) [perhaps the best three-year streak in cinema history, even], North By Northwest celebrates its 50th birthday this year...but you wouldn't know it by watching. Packed tightly with action, intrigue, thrilling chase sequences, amazing sets and plenty of humor, there was never a Hitchcock film quite like it.

North By Northwest marks leading man Cary Grant's fourth and final collaboration with Hitchcock; as the charming, sophisticated Roger Thornhill, it's not long before the smartly-dressed man gets into a world of trouble. He's mistaken for George Kaplan---a mysterious figure who may or may not be a CIA agent---by the equally mysterious Phillip Vandamm (James Mason), and Thornhill remains a fugitive from justice for a murder he obviously didn't commit. He meets the beautiful Eve Kendall (Eva Marie Saint) along the way, but the equally charming blonde seems to have ulterior motives. She's practically his only ally during the film's entire second act---and even then, it's questionable, as it seems that everyone else on the planet is out to get him. Armed with only a crisp, dark gray suit and a never-ending supply of witty comebacks, the suave advertising executive certainly has plenty of obstacles in his path.

North By Northwest is one of Hitchcock's longest films at 131 minutes, but the frantic chase rarely lets up---and it's been said before, but this film never drags along the way. Dozens of amazing backdrops keep the chase fresh and exciting, even when the scenes weren't filmed on location. The U.N. Building. Grand Central Station. Park Avenue. Downtown Chicago. Mount Rushmore. Even relatively bland landscapes, such as the flat farmland seen during the film's classic crop-dusting sequence, absolutely crackle with tension and mystery, since we're placed so firmly in Thornhill's shoes. Vandamm's ocean-view home---a modern structure with massive windows, huge foundation beams and high ceilings---may not seem like an ideal location for a daring third-act stakeout...but under the cover of night, such a spacious location only intensifies the danger. From start to finish, North By Northwest remains a nail-biter almost every step of the way, whether you've memorized all the twists and turns or you haven't seen it in years. 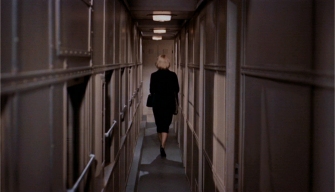 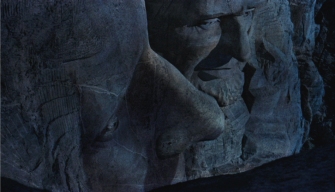 North By Northwest didn't mark Hitchcock's last collaboration with composer Bernard Hermann (who would score Psycho one year later, and Marnie in 1964), but this is easily one of the composer's finest works. Many of his musical cues are short, precise fragments; in fact, a recently released (and already out-of-print) Complete Score compiles nearly 50 tracks in all, even though it runs just 65 minutes. North By Northwest would hardly benefit from a slow, sweeping symphony of sounds: it speeds by in staccato bursts, often going toe-to-toe with the visuals for sheer suspense. Though the crisp dialogue is a highlight in more ways than one, Hermann's score and Hitchcock's silent film roots are North By Northwest's true one-two punch; an optional music-only audio track on this DVD offers plenty of proof, if you'd like to experience the film an entirely different way.

Originally released on DVD in 2000 (and again a few years later, with slightly different packaging), North By Northwest gets an upgrade for its 50th birthday---and though Warner Bros. is late by a few months, this two-disc package is a quality effort in every department. Not only has the already-great technical presentation been carefully polished, but the original DVD bonus features have been paired with a few thoughtful new extras. This 50th Anniversary Edition is also available as a Blu-Ray package, but those still limited to standard definition won't have much to complain about. Let's take a closer look, shall we?

Presented in a 1.78:1 aspect ratio and enhanced for 16x9 displays, North By Northwest looks stunning from start to finish. The top and bottom of the frame seem to have been opened up ever-so-slightly (as the film's original aspect ratio was 1.85:1), but the difference is thoroughly inconsequential. This excellent restoration was sourced from the original VistaVision elements and scanned at 8K resolution---which doesn't mean much when DVD has a max resolution of 480p, but at least those limited to standard definition will know that North By Northwest has been treated with extreme care. Though I don't have a copy of the 2000 release (which wasn't a bad transfer, by any stretch) for a direct comparison, it's unlikely that it looked this good. The film's Technicolor roots are well-saturated, black levels are rock solid and image detail is excellent. Simply put, it's about as pretty as DVD resolution will allow it to look.

Like the previous release, this 50th Anniversary Edition includes a robust English 5.1 Surround track (also available in a French dub)...and though the original English mono track still isn't available, it's hard to complain overall. Again, this is a tastefully-remastered track: the surround channels effective but used sparingly, while Hermann's bombastic score rarely has to fight for attention. Optional English captions and French subtitles have been included during the main feature only. 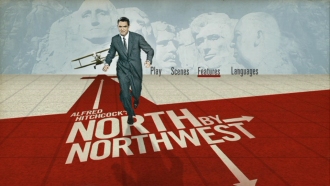 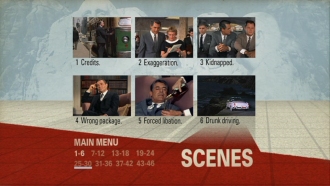 Seen above, the static menu designs are basic and easy to navigate. The 131-minute main feature has been divided into 46 chapters, while no obvious layer change was detected during playback. This two-disc release is housed in a standard hinged keepcase case; a handsome matte-finish slipcover and a promotional insert are also inlcuded.

Bonus Features
Luckily for DVD fans, Warner Bros. has included all the previous bonus features from the 2000 release---and, of course, they've thrown in a few new ones for good measure. Leading off the returning extras is a feature-length Audio Commentary by screenwriter Ernest Lehman, who does a fine job of keeping things interesting. A few gaps are present along the way, but Lehman's relaxed style---and his hands-on perspective of the film's inception and production, of course---makes this a solid commentary overall. Also returning on Disc 1 is a Music-Only Audio Track featuring Bernard Hermann's memorable score. This particular feature has gradually vanished from DVD releases during the last decade, so it's good to know this one's still on board.

Disc 2 contains a number of returning extras as well, including "Destination Hitchcock: The Making of North By Northwest" (39:26, below right). Hosted by Eva Marie Saint (with assistance from Lehman and Pat Hitchcock), this vintage documentary provides an informative and entertaining peek behind the curtain. The vintage extras conclude with a self-playing Stills Gallery (5:51) presented in loose chronological order, as well as a collection of Trailers & TV Spots (3 clips, 6:27 total) which includes a location tour with Hitchcock himself. Not a bad collection of extras, by any stretch...but this new 50th Anniversary Edition doesn't stop there.

Also here is "Cary Grant: A Class Apart" (87:14), an Emmy-nominated 2004 documentary directed by Robert Trachtenberg. Those unfamiliar with the leading man's life and times will certainly learn a few surprises along the way, as this blisteringly honest look at Grant showcases portions of his life not usually covered in typical TV-based biographies. Though only loosely related to the main feature, this feature-length piece is a must-see for fans of Grant. NOTE: This is not advertised on the packaging as a new or exclusive bonus feature for good reason, as it originally aired on TV and was already included on Warner Bros.' 2-Disc Special Edition of Grant's 1939 film, Bringing Up Baby. Either way, this informative piece is still a thoughtful inclusion and fits in nicely. 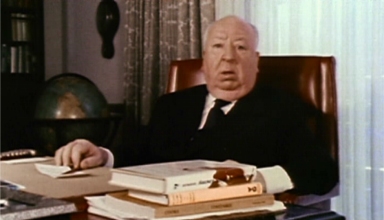 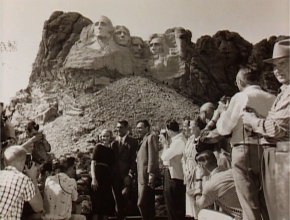 Leading off the new extras is "The Master's Touch: Hitchcock's Signature Style" (57:30, above left), a 2009 documentary that provides a general overview of the director's celebrated catalogue of films. Featuring participation from contemporary directors, authors, and more (and obviously cut from the same cloth as the new documentaries on Universal's "Legacy Series" Hitchcock releases), this clip-heavy piece will entertain and inform new and old fans alike. Topics include editing, visual storytelling techniques, music, leading ladies, Hitch's particular brand of humor and much more. Even though it only touches on North By Northwest for a portion of its running time, "The Master's Touch" feels right at home on this retrospective collection of extras.

On a similar note is "North by Northwest: One for the Ages" (25:29), a more film-specific piece featuring additional comments from Martin Scorsese, Curtis Hanson, Guillermo Del Toro and many other contemporary directors and writers. This provides a more chronological breakdown of the film's production, style and lasting influence, so die-hard fans should certainly find it enjoyable. While it feels a bit rushed at times, "One for the Ages" wraps up these new extras with style---and though a second feature-length commentary would've been preferable, it's hard to complain overall.

All bonus features are presented in 1.33:1, letterboxed widescreen and 16x9 enhanced formats...but sadly, only Japanese and Portuguese subtitles are available. Warner Bros. has been extremely inconsistent in this area for several years, so here's hoping they adopt a more all-inclusive policy in the near future.

Accessible, suspenseful and immensely entertaining, Alfred Hitchcock's classic North By Northwest has barely aged a day during the last five decades. Strong performances, beautiful landscapes, great music and plenty of twists and turns make this thriller a joy to watch, whether you've seen it a dozen times or haven't had the pleasure yet. Warner Bros.' tasteful re-release improves on the 2000 edition in every conceivable department, pairing a beautifully remastered technical presentation with a host of entertaining, appropriate bonus features. Though it's not quite enough of an all-out improvement to warrant our highest rating, this rock-solid 50th Anniversary Edition of North By Northwest belongs on the shelf of any serious film lover, whether you stick with this standard-definition release or opt for the Blu-Ray edition. Very, very Highly Recommended!