EVERY ADDICTION HAS A PRICE

the FIRST CUT is the DEEPEST 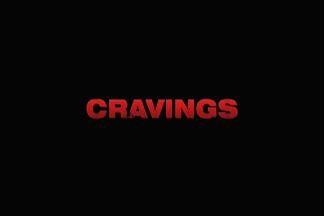 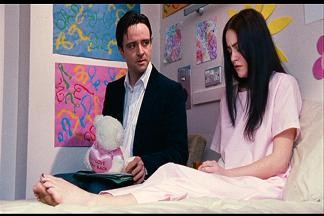 The first thing that struck me about Lionsgate's release of Cravings was its thoroughly hideous box art. This has got to be one of the worst DVD covers in recent memory. It features an ashen face with a badly-photoshopped mouth and fake-looking vampiric teeth overlaid upon it. My only guess as to why someone slapped this British import with this gaudy image is that it bears some similarity to the DVD box art for the first season of HBO's True Blood.

In any case, it's yet another example of Lionsgate's penchant for deceiving cover art (Legend of the Bog, etc. etc.). Cravings does have some supernatural elements (more on this in a bit), but it doesn't have any fang-bearing, True Blood-ish vampires lurking about.

Instead, Cravings (or Daddy's Girl, as the end titles suggest) tells the story of Stephen (Richard Harrington), a psychiatrist who has suffered a double whammy of misery thanks to his wife's suicide and frail mother's mysterious not-so-accidental death. His wife's death hits Stephen particularly hard, as he discovers her body floating in their apartment's tub during the film's difficult-to-watch opening sequence. With six weeks having gone by, Stephen decides to throw himself into his work to cope with his grief and depression. This brings him to Nina (Jaime Winstone), a troubled teenaged girl with a fixation for drinking blood. Stephen begins to suspect Renfield's syndrome, but his life is about to spiral out of control as he rather obsessively tries to help Nina, making some rather boneheaded decisions as he goes along.

The set-up for Cravings is very well-done. Writer and director D.J. Evans shows some promise, especially during the film's first 30 or so minutes. The aforementioned suicide scene during the film's opening is creepily filmed. The movie uses color very boldly, with striking character outfits and visually interesting settings (I especially liked how Nina's clothing matched her surroundings at the hospital). Some care is taken in Evans' script to develop its characters, always a nice plus in a horror film. And, I'll even credit Owen Powell and Rob Reed for a surprisingly bold score, reminiscent of Goblin's work in Dario Argento's films, although it does sometimes become overbearing.

However, Cravings falls apart badly in the second half. The primary problem is that Stephen ends up making a bunch of very, very bad decisions - and these decisions weigh heavily against the movie's plausibility. I suppose one could write them off as the actions of a grieving man who is desperate and not in the right frame of mind, and certainly his unconscionable sexual affair with Nina's mother (Louise Delamere) can be ascribed to his state of mind. But, he allows Nina to spend the night at his apartment (even after a number of bloody incidents), and by that point in the movie, no one is going to think this is happening in a real world. The real horror is that the hospital staff knows something is amiss and fails to act in a timely manner.

Jeremy Biltz wrote a review of this movie last week for DVD Talk, and I couldn't agree more with him when he concluded that "the story meanders through its ninety minutes hardly seeming to know where it's going or why." Cravings, in my mind, would have been better off a short film or an episode of an anthology - with some of its extraneous storytelling left on the cutting room floor. I would start by editing out Stephen's mother (a redundant story element) and several scenes with a psychic plumber who suggests the ghost of Stephen's dead wife is responsible for his plumbing woes (a plot element that really does seem to go nowhere).

As I said a few paragraphs ago, there are things to praise about Cravings, and I'd be interested to see more work from D.J. Evans in the future. However, the promise early in this film is let down by an unnecessarily convoluted plot and character decisions that make little sense. It's worth a rental, but not much more. 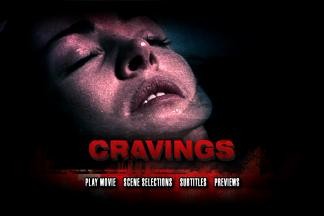 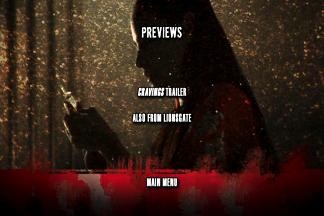 Lionsgate gives Cravings an anamorphic widescreen presentation with a 1.85:1 aspect ratio. Maybe details could have been sharper, but I felt overall pleased with the visual quality here. It was especially nice to see a horror film use strong colors in favor of the washed-out look that many contemporary fright flicks utilize.

The lone audio track is an English language Dolby Digital 5.1 affair. This track sounds fairly good, though not particularly dynamic. The score sometimes comes off as too strong, but that's a minor quibble.

Optional subtitles are available in English and Spanish.

Trailers for Frayed, Necessary Evil, Dead Wood, and The Last Resort as well as commercials for Break.com and Fear Net precede the main menu. A Previews link in the menu system provides access to these ads collectively as well as an additional trailer for Cravings. And that's it for the extras on this disc.

Writer and director D.J. Evans shows some promise with Cravings, offering an engaging opening and a compelling story premise. Unfortunately, the movie becomes increasingly bogged down by a too-elaborate plot involving some dramatically boneheaded decisions on the part of the protagonist. It's worth a look, but only as a rental.