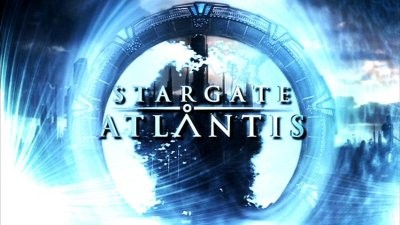 Stargate Atlantis is a spin-off series from the popular science fiction television series Stargate SG-1. "Atlantis" is set in the Pegasus Galaxy, a remote corner of the universe, where a new team of scientists and military personnel follow leads about the ancients and face a new terrible foe called the Wraith. The spin-off series has been quite successful and later this year will begin airing its fourth season. For more details about this series, please refer to DVD Talk's reviews of the pilot episode, season one, season two, season three, and season four.

Season five of Stargate Atlantis is the final season. The host network officially announced its end during season five's airing. Personally, after a rather lackluster fourth season, I was ready to give up on the show. However, since I had invested so much in the series and the original, I watched season five as it aired. For the most part, I had to force myself through it. The Stargate magic was lost since season three and while season five was better than season four, I never got into it and was not disappointed when it was cancelled. The show had a good run, but it was past its prime. Despite, season five has some good episodes and developments about the wraith story arc, albeit there weren't enough. Overall, season five is best reserved for the most hardcore fans.

In season five, there is one major change. With season four, Dr. Weir was replaced with Samantha Carter as the head of the expedition. I love Carter, but did not feel she was the right character for this show. Her role was not as strong as in the original series. Richard Woosley (Robert Picardo) of the International Oversight Advisory (IOA) becomes a permanent cast member in season five as the new Atlantis leader. After the end of season four, the IOA decided civilian oversight was a necessity for the smooth, continued operation of the expedition. In reality, they wanted to have more control of what happened in Atlantis. Woosley makes for an interesting leader, but sometimes he feels out of place. The new leadership makes a lot of new problems, which include plotlines about military and IOA political differences. On several occasions, Woosley has to balance his obligations to the IOA and what is best for the people at Atlantis. 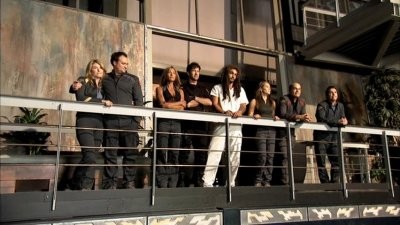 The season begins with "Search & Rescue", which is the conclusion to the season four cliffhanger. Sheppard and crew race against the clock to find Teyla, who was kidnapped towards the end of season four. Michael wants her unborn baby to conduct tests on, as he believes the baby will help him make his army of human/wraith hybrids stronger. However, the Atlantis crew is able to save her just in the nick of time. As the season continues, the Michael plotline is put on the backburner. References are still made to it, but it is not until "The Prodigal" that the team has another showdown with Michael.

The wraith were weakened by the Hoffman drug and are no longer a big threat to the Pegasus galaxy. In "The Queen", the drug is revisited. Using research from one of Michael's research facilities, Dr. Keller believes she can alter wraith DNA to no longer need to feed. Instead, they would eat like a human. The team tries to work with the wraith Todd, but he has a hidden agenda. This development is revisited in "First Contact" and "Infection".

The rest of the season goes in many different directions. For instance, "Broken Ties", Ronon is kidnapped by a former friend turned wraith worshipper, "Ghost In the Machine", Dr. Weir returns in a replicator body, "Inquisition", Sheppard and others are tried for crimes against humanity, "Brain Storm", Dr. McKay attends a scientific demonstration that goes wrong (guest stars like Dave Foley and Bill Nye), "Identity", Dr. Keller's mind gets trapped in a body of a person who is about to be executed, and "Vegas", an alternate reality episode with Sheppard a cop and a wraith serial killer. In short, the season does not have a driving story arc as past seasons did. With the wraith defeated and Michael on the run, there was not much for the season to focus on. Instead of introducing a new story arc of bad guys (such as its Stargate: SG-1 replacing the defeated Goa'uld with the Ori), there are seemingly random episodes with the crew going on a mission and encountering a new bizarre problem or the occasional revisit to a past season plotline.

Overall, I was not a big fan of season five. I thought it was much better than season four, which just got a little too sci-fi for my tastes. Season four's direction was focused, but at the same time almost uninteresting. I am glad to see those plotlines were not a big part of season five. Despite, season five was not a big winner in my books. The directionless episodes had their moments, but after a while felt like they were re-addressing the same issues over and over again. On a positive note, the cast continued to have a good dynamic together. Nevertheless, Stargate: Atlantis' fifth season was not a favorite of mine. I was able to sit through the season episodes as it aired and again on DVD, but it is nothing I would expect to watch again. 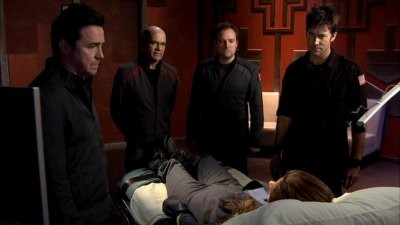 1. Search and Rescue: Trapped in rubble following a subspace burst, McKay, Lorne, Ronon, and Sheppard await rescue. Will Michael's Wraith cruiser or the Daedalus reach them first?
2. The Seed: When a mysterious alien creature takes Dr. Keller as its host, Beckett and the crew desperately search for a serum to save her and Atlantis.
3. Broken Ties: Ronon undergoes a torturous ordeal as the prisoner of a former friend, Tyre, who turns him over to the Wraith in hopes of gaining their favor.
4. The Daedalus Variations: When the team boards a duplicate Daedalus, they encounter sinister alien life forms, searing sun and a pitched space battle over Atlantis.
5. Ghost In The Machine: After a mysterious entity causes crippling havoc within the city's computer systems, an old friend of McKay's appears without a body.
6. The Shrine: When a parasitic organism in McKay's brain robs him of his identity, he falls fatally ill and his sister Jeannie is summoned to say her final goodbyes.
7. Whispers: An Atlantis team discovers one of Michael's secret labs in an off-world catacomb. Meanwhile, an abandoned village Sheppard is exploring shows unusual evidence of life.
8. The Queen: Believing that Michael found a way to stop the Wraith from feeding on humans, Keller seeks Wraith subjects for a study. Meanwhile, Teyla risks her life aboard a hive ship.
9. Tracker: With Keller apparently kidnapped, McKay and Ronon set out to find her. But this attracts hunter Wraith, which forces Ronon to act as a Runner to outwit the bloodthirsty aliens.
10. First Contact: Atlantis encounters a mysterious alien race when McKay and a visiting Dr. Daniel Jackson stumble upon the secret lab of a rebellious Ancient scientist named Janus.
11. The Lost Tribe: With the Daedalus under siege, Jackson and McKay try to keep a reactivated Ancient weapon from triggering a cataclysmic chain of events.
12. Outsiders: A group of Balarians who survived the Hoffan plague face certain death by the Wraith unless Sheppard can intervene on their behalf.
13. Inquisition: Sheppard and his team are abducted by a newly formed galactic coalition and made to stand trial for crimes against the indigenous peoples of the Pegasus Galaxy.
14. The Prodigal: A force field keeps Sheppard and Dr. McKay from researching a mysterious power outage. Meanwhile, Teyla awakens following an ambush to find Michael standing before her.
15. Remnants: While McKay and Zelenka examine a mysterious object found at the bottom of the ocean, Sheppard is captured by a former enemy who seeks his ID code.
16. Brain Storm: A device that can stop global warming cannot be turned off, which threatens to freeze to death everyone around the device, including McKay.
17. Infection: Sheppard gives the order to help Todd and a hive ship crew recover from a disease. But there are complications, including the fact that the ship itself poses a danger.
18. Identity: An alien device has caused Keller to trade bodies with a criminal about to be executed. The only way to reverse the event is to gain the cooperation of the killer.
19. Vegas: Radiation found on the bodies of the victims of a serial killer near Las Vegas leads to the identity of the killer, a Wraith. And it's up to Sheppard to stop him.
20. Enemy At The Gate: Before Woolsey can attack a powerful new hive ship, the ship renders the Daedalus useless. The worse news? The hive ship is now headed for Earth. 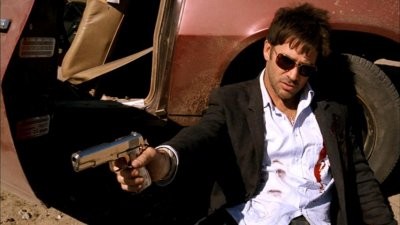 Audio:
The audio track in this release is in English 5.1 Dolby digital surround and dubbed tracks Dolby surround in French and Spanish. In general, the sound quality is very good and it provides an audible and clean track. The dialogue is usually a little flat while music and sound effects come off rich and vibrant. Additionally the 5.1 track is dynamic and makes good use of the surround sound capability. There are subtitles included in English, Spanish, and Portuguese, as well as support for closed captioning. 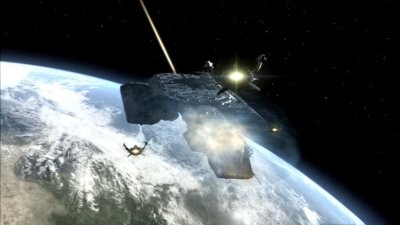 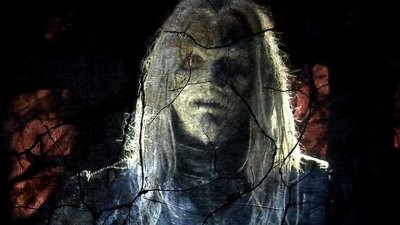 Final Thoughts:
In Stargate: Atlantis's fifth and final season, the season's tempo goes in varied directions. Since the past bad guys have been defeated (or nearly), such as the wraith, Genii, and replicators, there are not as many bad guys for the Atlantis team to stumble upon. Instead, there are a lot of character-focused episodes, as well as a few old faces/plotlines revisited. For the most part, season five is an improvement over the lackluster season four, but it still fails to have the same energy and excitement as the series' first three seasons. Overall, season five is best for the most dedicated fans.