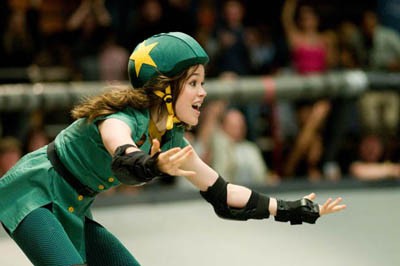 It's a shame that the term "feel-good movie" has been co-opted by the cheesy and the awful, because movies where the main goal is to entertain us and make us feel better about the world can be truly wondrous things. I was in a dour mood, feeling tired and overworked, when I went into Drew Barrymore's Whip It, but when I walked out, I was smiling and happy and ready to text all my friends and tell them to go see it.

Based on a book by Shauna Cross, who also wrote the screenplay, Whip It is the tale of 17-year-old Bliss Cavendar (Juno's Ellen Page, who after this film can finally stop being Juno's Ellen Page). Stuck in a small town in Texas where Austin is close enough to feel its presence but not so close one can get there without a little chicanery, Bliss spends her time working at the local grease pit, fantasizing about a better life with her best friend Pash (Arrested Development's Alia Shawkat). She also enters local beauty pageants at the behest of her mother (Marcia Gay Harden, The Mist), a former beauty queen herself and now a postal worker. Bliss' dad (Daniel Stern, City Slickers) is the kind of middle-aged father who is a nice guy and more understanding than he lets on, but would rather hide out and avoid confrontation. The Cavendar world is a feminine one, just not the kind of feminism that satisfies Bliss.

Cut to a day out in Austin clothes shopping with mom and little sis (Eulala Scheel), and Bliss spots a couple of roller derby girls distributing flyers. In one instant, she sees everything she's been looking for, a symbol of freedom on eight wheels. She and Pash sneak out to see the Derby, and after talking to Maggie Mayhem (Kristen Wiig, SNL), Bliss decides to lie about her age and try out for the team. Though rickety on skates, it turns out she's pretty fast, and the team's coach (Andrew Wilson, "Future Man" from Bottle Rocket, a.k.a. the Wilson brother you aren't sick of) immediately signs her up, seeing a chance for his crew, the Hurl Scouts, to finally win a match or two. Bliss is now a member of a team of rough-and-tumble girls wearing revealing Girl Scout uniforms and sporting dangerous names. She trades her own happy moniker for something a little more intimidating: Babe Ruthless.

In terms of both teen drama and sports flicks, Whip It follows a fairly standard arc: girl finds something she loves, girl lies to get it, girl must reconcile with that lie in order to truly succeed. Along the way, Bliss makes some real friends, has her first romance with a boy in a band (singer-songwriter Landon Pigg), alienates her BFF, and even earns a rival, the badass Iron Maven (Juliette Lewis, Old School, Cape Fear). Yet Shauna Cross and Drew Barrymore have stumbled on a fresh setting for it, the right hip thing at the right time, so that Whip It doesn't feel like a retread. It's sincere enough and funny enough that you'll be too busy crushing all over it to stop and think about whether or not you've seen any of this stuff before. 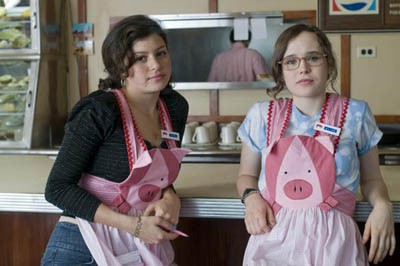 One has to give Drew Barrymore credit, she has stepped into the role of director with incredible confidence. She is not perfectly assured yet--Whip It starts out a little slow, and not all of the derby sequences are as dynamic as they could be--but she hits most of the marks she strives for. The humor amongst the derby girls may be the movie's most winning asset. In addition to Page and Wiig, the Hurl Scouts include rapper/actress Eve, stuntwoman Zoë Bell (Death Proof), and Barrymore herself, and judging by the funny outtakes in the closing credits, the camaraderie onscreen feels so real because the girls were also having fun on set. The remarkable supporting cast also includes Jimmy Fallon in an amusing role as the derby announcer and Ari Graynor as Eva Destruction, a skater on one of the other teams. Graynor was the only real reason to see Nick and Norah's Infinite Playlist, and though Eva doesn't provide the same scene-stealing opportunities, the young actress is still one to watch.

Ellen Page has smartly been a little quiet since Juno, and Whip It was a good choice for her. Bliss is far more dialed down, and there isn't a reliance on clever dialogue. So, despite playing another young woman trying to establish her own identity, the performances aren't at all similar. Page looks natural playing shy and quiet, and she let's Bliss emerge from her shell rather than jumping straight out of it. The character undergoes a progressive metamorphosis rather than one startling epiphany that makes it all work. Barrymore shows an amazing sensitivity in terms of the more heartfelt moments of Bliss' journey. She's not afraid to pull away from the party atmosphere and show a quiet moment between mother and daughter, or to let her characters have an honest talk. Parents should like Whip It as much as their teens, and they will likely applaud the fair way in which mom and dad are handled, as well as the straight-talk Maggie Mayhem gives Bliss when she sees the youngster going off the rails.

Being a sports movie, naturally, it all comes down to the championship at the end. Since all the hard work has already been done to make us care about the characters, at this point Barrymore is able to cut loose and just have fun with the finale. It's a nail-biter, full of moments to cheer, moments to wince at, and some honest-to-goodness tension. It's easy to make a climax like this contrived and cliché, but Drew doesn't overdo it. She stays true to the tenor of the rest of the film, meaning that though Whip It may reach for all those emotion buttons, it's never manipulative in doing so--which is exactly the way a feel-good movie should be made. You don't have to hate yourself the next day, you can genuinely like Whip It, guilt-free.