Limits of Control, The 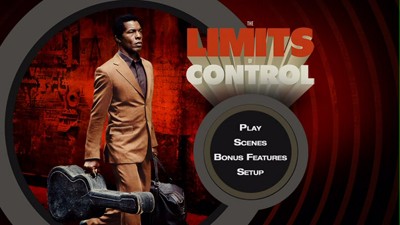 There is a metafictional scene in the first act of The Limits of Control where Tilda Swinton, decked out as a 1960s blonde cowgirl of some kind, seemingly lays out the entire thesis of Jim Jarmusch's movie for the writer/director. She is talking to Isaach De Bankolé, telling him about the kinds of movies she loves. She mentions the sense of unknowing evoked by Hitchcock's Suspicion, the narrative knot of Welles' The Lady of Shanghai, and less specifically, movies that appear to be dreams and the quiet cinema of two people simply talking. In one short scene, she gives the viewer everything she needs to know about The Limits of Control and quite possibly obfuscates the movie's meaning further. In Jim Jarmusch's world, whether this interlude hurts or helps is all a matter of point of view.

De Bankolé stars in the movie as the "Lone Man." He is some kind of deliveryman, a gangster, a solitary traveler who is the connecting thread for a puzzle that takes him all the way across Spain. He meets a variety of characters, trading matchboxes with them. In each box is a coded message, and sometimes payments. The new agents in this plot also deliver cryptic instructions. "The guitar will find you," "The Mexican will bring the driver," etc. Who these people are, what their goal is, it's never explained. Jarmusch runs through an international cast for his messengers: Swinton, Gael Garcia Bernal, Paz de la Huerta, Hiam Abbass, John Hurt, and Bill Murray all make appearances. They come, they go, and if they are seen again, it's usually not good. The Lone Man continues on regardless, mostly silent, unfazed. In a way, the comings and goings remind me of Jarmusch's own anthology film, Coffee & Cigarettes, in which randomly placed pairs of people come together for short conversations.

The Limits of Control references many films. In addition to the Hitchcock and Welles, there are also nods to Andrei Tarkovsky, Aki Kaurismäki, and the Mexican director Rogelio A. González, who made a film called La Vida no Vale Nada, a saying first related by John Hurt and later appearing on the back of Hiam Abbass' truck. "Life is worth nothing." 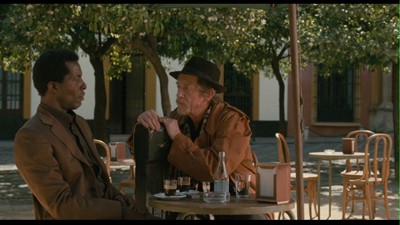 The director The Limits of Control reminded me of the most, however, is David Lynch. The repetition of cryptic lines, random and mysterious figures, visual cues signaling a changing state of being, and the use of ambient music to create an aura of nightmare and doom all fit the Lynch m.o. The beauty of the images, here shot by the fantastic Christopher Doyle (In the Mood for Love, Paranoid Park), the vivid colors and the juxtaposition of the clean and new with the old and faded, all remind me of Lynch's versions of suburbia and Hollywood, pre-Inland Empire and his discovery of digital ugliness. Even if nothing is "happening" on screen, there is always something to look at. Doyle's camera sees the world in rich palettes few other cinematographers dare to even dream of.

The Limits of Control may appear to be aimless fluff to some, but those who stick with it will see that the Lone Man's journey does have a purpose. Jarmusch is wrestling with metaphysical and philosophical ideas, questioning how we perceive the world and our place in it. I also thought the movie was intended to make a statement about the artistic process. The Limits of Control is Jarmusch punching at the ghosts that haunt moviemaking. The Lone Man seeks to create something beautiful, but his path is beset by challenges from unseen forces who have little idea of how a true artist gets results. When the Lone Man finally reaches his target, he finds a corporate stooge that can't even fathom how this mysterious stranger penetrated his world. "I used my imagination" is the Lone Man's reply. Imagination is a difficult commodity to quantify. Jarmusch even gives it bigger implications, adding a political wrinkle that would suggest that the same stranglehold the moneymen have on the motion picture industry is choking the human spirit worldwide. The control they take is at the sacrifice of your own power and destiny.

I can't say that The Limits of Control is the most satisfying of Jim Jarmusch's movies, but it may be the most challenging and its obtuse nature might also mean it's the most personal. The director's movies have always been stories about people who are out of step with everything and everyone around them, and most recently, they've been lone crusaders looking for some meaning in a world that has lost context, be it the modern day samurai in Ghost Dog or the lonely Don Juan of Broken Flowers. In The Limits of Control, Jarmusch pushes his onscreen avatar away from the familiar and into terrain that is more abstracted. In a way, the message that Tilda Swinton delivers reminds me some of the message in the most recent Coen Bros. film, A Serious Man. Sometimes stories don't say anything, their meaning is in their absence of meaning, that they are purposely unfathomable. I compared A Serious Man to a Zen koan, the kind of riddle that you chew on for a long time and only begin to understand when you've absorbed its many parts and have stopped trying to pull them apart; I think The Limits of Control is a lot like that, as well. It doesn't make sense right away, but it starts to unfold the longer it sits with you. Like swallowing the bud of a rose and having it bloom in your stomach, you can feel the petals curl and stretch, even if the flower has long since passed out of your vision. 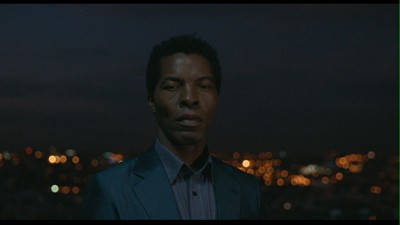 Video:
The 1.85:1 transfer on The Limits of Control starts with a worrisome black screen that shows some inky splotches, but don't fret, once the movie proper begins, the image quality is nothing short of spectacular. Christopher Doyle's gorgeous cinematography looks remarkable on disc. In particular, watch for a scene where Isaach De Bankolé stands on his hotel balcony, framed by the city behind him, the purple of the sky blending with the purple sheen of his suit, and tell me that doesn't look stunning.

Sound:
The original English and Spanish soundtrack is mixed in 5.1, and it is given a rich, warm atmosphere, with good ambient effects working through the speakers and nice fills when the music comes on.

Subtitles are available in English for the deaf and hearing impaired, as well as in Spanish and French. 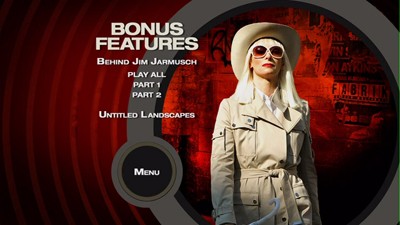 Extras:
The disc's bonus section leads with a two-part program called "Behind Jim Jarmusch." Clocking in at 51 minutes, this is an on-set diary, capturing long days of shooting with very little commentary in the first portion except interjections from Jarmusch, and more from the actors in part 2. We see Chris Doyle and cast and crew really getting down to the business of filmmaking, and none of this varnished crap about how glamorous or perfect the process is.

The second feature is called "Untitled Landscapes" (4 minutes, 14 seconds), and it is a montage of some of the panoramic scenery shots, many taken from a train window, set to music from the movie.

FINAL THOUGHTS:
Recommended. The Limits of Control is a difficult yet rewarding film where the mystery is the story process itself. Following a Lone Man (Isaach De Bankolé) across Spain as he carries out an undefined assignment, writer/director Jim Jarmusch builds a dream-like mood, stringing together a haunting puzzle that's components create a portrait and critique of the creative process. The DVD comes with a couple of solid extras, showing Jarmusch's control over his own movie set. It's the kind of movie that is meant to be absorbed and contemplated, and though not for everyone, should be satisfying for the intellectually adventurous. 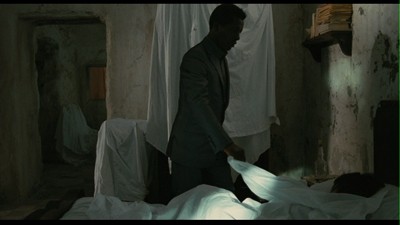