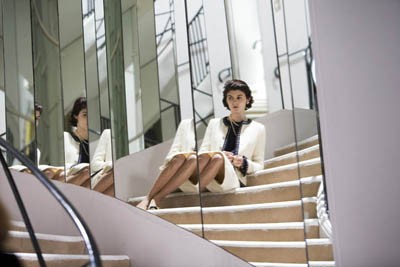 Well, the good news is that Audrey Tautou has made a good film again, and she didn't even need Jean-Pierre Jeunet to do it. And, well, there pretty much isn't any bad news. Coco Before Chanel is a good film. Not a great one, so maybe we can consider that the downside.

Coco Before Chanel is an unconventional biopic in which the sprightly star of Amelie gets all serious on us, playing fashion visionary Coco Chanel--though, as the title implies, before she was Coco Chanel the brand. It's all the events leading up to her success as a designer rather than the usual birth-to-death portrait. In that, it reminded me of Bright Star, Jane Campion's recent film about John Keats, which focused on his final years and was all the better for it. It seems filmmakers are finally wising up to the fact that an entire life doesn't really fit into two hours of cinema. Anne Fontaine, perhaps best known for The Girl From Monaco, both writes and directs here (sharing script credit with Camille Fontaine and Christopher Hampton, and working from a book by Edmonde Charles-Roux). Outside of a brief introduction to Chanel's childhood abandonment, she hones in on a period of ten years or so, from the early 1900s when Chanel met Étienne Balsan (Benoît Poelvoorde, a long way from Man Bites Dog) up until about 1919, after she had opened her first shop and lost her lover, Arthur "Boy" Capel (Alessandro Nivola, Junebug).

These would be the formative years. The affair with Balsan begins when Coco was singing in saloons at night and working as a seamstress by day, both activities undertaken with her far more outgoing sister, Adrienne (Marie Gillain, My Father the Hero). Coco and her sister couldn't be more opposite. Whereas Adrienne is romantic and fun, Coco is serious and practical. In many ways, Coco's relationship with Balsan is more business than pleasure, at least at first. They become accustomed to one another's frankness. He can be a lush around her, she can be as moody as her temperament demands. The bond between them is never really examined until Capel comes along. The passion he inspires shows what is missing for Coco and makes Balsan face what he really has. 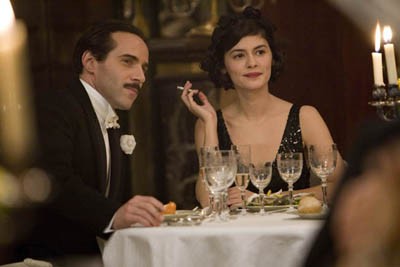 Most dramatic biographies about artists are love triangles. Usually it's the artist, their soulmate, and the art itself, with an expected arc where the art takes precedence but the rewards it brings ends up causing the artist to be estranged from both it and the one who has stood beside him or her. Coco Before Chanel is a love triangle, as well, but a more traditional one. Art doesn't come into it nearly as much as it would had Fontaine chosen to look at the woman later in her life. Creation isn't really a compulsion for Chanel, at least not yet. She has a personal aesthetic that sets her apart from the fashion of the time, and we hear her critique what others are wearing, but this is not a collection of "ah-ha!" moments where Chanel's signature style can conveniently be related back to events in her childhood. Rather, at this point in life, she doesn't really know what she wants, and her creativity turns out to be the key to her freedom, a means to an end, rather than a defining principle. Fontaine draws a vague connection in the final reel between Chanel's mourning and her penchant for black, but that is it.

Unfortunately, the writer/director was not as restrained with the rest of the story, and Coco Before Chanel's failing is that its romance is far more conventional than the woman herself. The movie really starts to drag in the third act when the two lovers usurp attention by battling for Coco's heart. It seems to take forever to finally get Chanel off of Balsan's estate and into her Parisian boutique, and the movie might have been served better had we gotten a little more of that and a little less of trying to make us wonder who she will choose. It's not like there's any real mystery there, anyway.

In fact, one of the most compelling elements of Coco Before Chanel is how Audrey Tautou transforms from the buttoned-up woman who glowers her way through Balsan's parties to the more sophisticated and effervescent independent woman. It's a change done mostly in montage, and it's more than just a matter of new clothes and a new hairdo. The true metamorphosis is in how Tautou carries herself and the light in her eyes. In that shop, it seems, Coco Chanel really came alive. It also makes the rest of Tautou's performance all the more impressive. It's then we realize how much she's been holding back, the desire she's been keeping bottled up. Though always apparent, the depth of it only makes sense in retrospect. (Also, look up a picture of the real Chanel, and you'll be astonished how much Audrey Tautou looks like her in the final scenes.)

In this way, Coco Before Chanel is really a performance film in much the same way La vie en rose was. Without Audrey Tautou or Marion Cotillard, there would be nothing special about either movie. They are shot well, edited competently, and are otherwise solid efforts, but not as unique as the individuals they attempt to portray. It's always the real catch-22 of the biopic, regardless of the approach: if your subject was easy to recreate, they wouldn't have been special enough to warrant the attempt. It's like looking at a distant planet with a telescope. Neat, but not the same as being there.