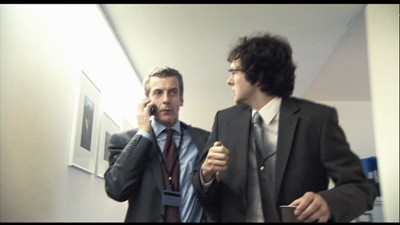 Trying to describe the movie In the Loop is one of those weird tasks where it seems impossible to get across just what a strange and special thing it is. It's kind of like Halloween night in San Francisco. You will be amped up, the people around you are doing and saying strange things, and it all moves with a visual verve that you didn't quite anticipate going in. Yet, if I were to try to tell you what I saw, it would sound like I was just hanging around a bunch of people in costumes, what's so different about San Francisco than anywhere else on Halloween? You really just have to go yourself.

In the Loop is a film helmed by Armando Iannucci, creator of the BBC series The Thick of It. That series, which has so far run four seasons since 2005, details the ins and outs of the day-to-day work of British government. In the Loop is a spin-off of sorts, and it features the show's foul-mouthed politico Malcolm Tucker, played with saliva and brimstone by Peter Capaldi. Don't let that scare you, though. I have never seen The Thick of It (something I plan to rectify immediately), and I understood In the Loop just fine. You don't have to pass a test, there is no prior knowledge required for entry.

Set in a period of time where a possible Middle Eastern war is brewing, In the Loop details how minor politicians move both the United Kingdom and the United States toward conflict. A slip of the tongue by a minor minister, Simon Foster (Tom Hollander), nicknamed Simon Fluster due to his regularly tripping over his own words, makes a similarly minor U.S. official, Karen Clarke (Mimi Kennedy), think she has an anti-war ally in the British government. Simon's backpedaling takes him so far away from his original statements, however, that he ends up on the radar of Karen's hawkish rival, Linton Barwick (a remarkable David Rasche, last seen in Burn After Reading). In between them is a report detailing the pros and cons of the theoretical aggression, written by one of Karen's staffers (Anna Chlumsky, who has grown up a lot since My Girl). Liza thinks her report could be the death of her career, others see it as the right tool to bend and break to their own ends.

When Simon is called to the U.S., he is accompanied by his new aide, Toby (Chris Addison), whose tongue is as loose as his boss'. A few misplaced secrets lead to Barwick's plans being exposed, drawing in General George Miller (The Sopranos' James Gandolfini), who is cautious about leading troops into battle but not about crushing his opponents in Washington. It also brings down the wrath of Malcolm, and heads begin to roll as he joins the side pushing for war, promising previously unseen intelligence that will prove it's all worthwhile. Add to this that Simon is locked in a public relations morass back home over a crumbling garden wall--his opponent here an hilarious Steve Coogan--and everything is just one big mess waiting to cave in on itself. (Psssst. The wall is a metaphor!) 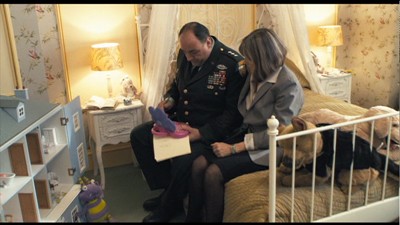 This farcical satire is more than its cat's cradle of a plot, though. In the Loop has drawn rather obvious comparisons to David Mamet and Barry Levinson's Wag the Dog, and the coupling is more than a superficial relationship of narratives about building phony wars. Armando Iannucci, who wrote In the Loop alongside Simon Blackwell, Jesse Armstrong, Tony Roche, and Ian Martin, also have the same gift for the poetry of profanity that distinguishes Mamet's more Mamet-y efforts. The difference is that these fellows aren't shackled to Mamet's usual syncopation, and so they are free to let the invective fly at whatever pace suits their mood. The main diatribes unfurl like race cars leaping off the track, but a lot of the best laughs are in the asides, the small rejoinders buried between the big quotable lines. These usually come as insults slipped into rants by those being ranted at or sitting on the sidelines watching. The fact that these guys are talking about rather substantial things is almost unimportant. I know it's a cliché, but I swear, they'd make a shopping list sound interesting. (Also, imagine this as Aaron Sorkin's The West Wing taken off the chains of network censorship.)

The cast that pulls off this wonderful dialogue is all top-notch. Naturally, when it comes to histrionics, it's Capaldi's show, but Gandolfini presents a rather formidable brick wall for him to run into. Another standout is the press secretary Jamie MacDonald, played by a blistering Paul Higgins; apparently this is another character from The Thick of It, and the way his introduction is set up, I'm sure Iannucci knows it's likely to give the show's fans a charge when Higgins steps through the door. The rest of the cast are buffeted along by their own befuddlement, careful to undersell their characters' many incompetencies. Special kudos to Zach Woods playing Liza's rival Chad. He has mastered the art of sleepy-eyed sycophancy.

Mindful of making In the Loop a talking-heads movie, Iannucci and cinematographer Jamie Cairney shoot the film in a faux-documentary verité style. Much of the movie is shot on location, criss-crossing the Atlantic more than once. The camera stays in motion, and it keeps the film moving, too. Editors Anthony Boys and Billy Sneddon have achieved a stunning success, culling what was reportedly a 4.5 hour original cut into a tight 106 minutes. They've made such a lithe, athletic animal out of it you'd never know that In the Loop was ever such a behemoth.

If you're still reading this and thinking what I describe doesn't sound like so very much, well, just get over it and go get your hands on In the Loop. When you see it, you'll understand. It's a witty, foul, and wickedly smart little movie. 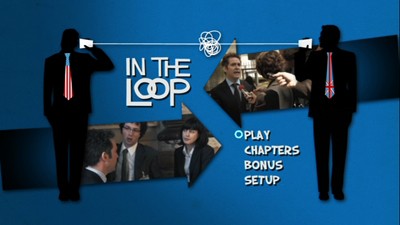 Video:
In the Loop comes to DVD as a 1.85:1 anamorphic transfer. The production was shot digitally and sometimes has a spartan look to it, but the DVD maintains crisp resolution and has strong, realistic colors.

Sound:
The original soundtrack is mixed in 5.1, which could be slight overkill for a movie that is primarily run on dialogue. I didn't notice any particularly grand inter-speaker effects, the mixers kept a pretty tight focus on the dialogue, but the track does have a good overall roundness that adds to the believable atmosphere. Also, the use of some key "in the scene" music is done quite well.

Subtitles are available in Spanish and in English for the Deaf and Hearing Impaired. 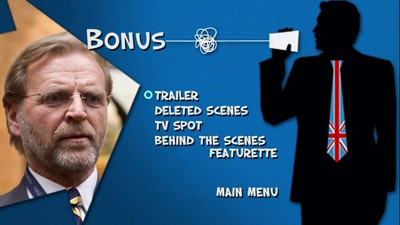 Extras:
The extras on the disc don't really knock it out of the park. There is a trailer and a TV commercial, as well as 3-minute promo spot that aired on IFC that is boldly billed as a "Behind the Scenes Featurette."

More substantial is the near half-hour of deleted scenes, none of which seem like they would have benefitted the movie all that much, but the various snippets do show how much more dialogue there was and also the actors playing around with the material.

FINAL THOUGHTS:
Highly Recommended. In the Loop is a fast-paced and quick-witted political satire that avoids being stuffy or, really, overly political. It features a fantastic ensemble cast playing low-level bureaucrats bumbling their way into war. With a tour-de-force performance from Peter Capaldi, whose profanity-laced tirades are a wonder to hear, the jokes come like venom being spit from a cobra. Prepare to laugh until your lungs burn. 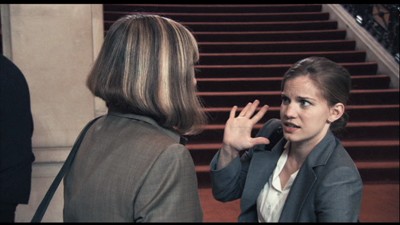