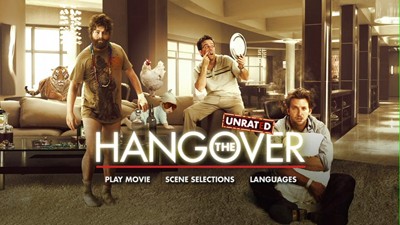 Doug is about to be married to Tracy, and for his last hurrah, his best friends and her brother have planned a trip to Vegas two days before the ceremony. One night of getting their rocks off in Sin City should tide the boy over and prepare him to settle down, but the next morning, when the three friends wake up in their own filth and without the groom, it's clear something went wrong. The next twenty-four hours are spent piecing together the bachelor party to end all bachelor parties, trying to find at which point Doug went off the grid. Tigers, babies, stolen cop cars, trips to the hospitals, Chinese gangsters, and Mike Tyson all figure into the absent hours, but each comedic turn brings only confusion, no future husband.

The Hangover is the new film from Todd Phillips, the director of Old School and a couple of unfunny missteps like Starsky & Hutch and School for Scoundrels. Luckily, he has gotten his overgrown adolescent groove back, and The Hangover takes us back to the kind of crude dude comedy that made his name. In fact, this film appears to be redemption for a lot of people. Screenwriters Jon Lucas and Scott Moore have also penned recent duds like Ghost of Girlfriends Past. Gentlemen, you are forgiven.

The smart concept of The Hangover is that essentially we are watching a journey in reverse, a puzzle being put back together after the four guys drunkenly smashed it. Doug (Justin Bartha) is the stable lynchpin of the bro pack, leaving his clueless pals all on their own to track him down. There is the bitter, jerkish married man Phil (Bradley Cooper), the henpecked nerd Stu (Ed Helms from The Office), and the weird, hairy manchild Alan (Zach Galifianakis), the tag-along brother-in-law, not too bright and riddled with neuroses. Together, they hit their various comedy types on the nose, playing them as expected and doing it well. Helms and Galifianakis are the show stealers here. Both manage physical performances that aren't overly quirky or mannered, but that are still uniquely them. Helms throws out precise, dramatic gestures to emphasize his points, whereas Galifianakis' slovenly tumbles are hilarious for being so haphazard. Likewise, his out-of-left-field asides tend to be the funniest lines of the movie, and he delivers them with such little fanfare, you could almost miss them--though it's that off-the-cuff demeanor that makes the zingers work the way the do, like slow, ever-expanding burns. In comparison, Bradley Cooper is kind of stuck with the thankless job of being the a-hole, but he manages to distinguish himself quite well. The Hangover wouldn't gel without him, he is the glue that binds the two weirdos together. 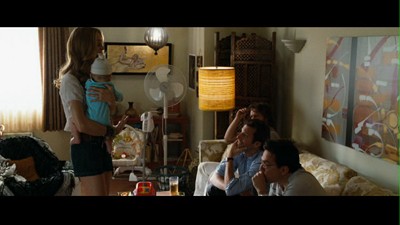 Of course, the movie is populated with plenty of other weirdos, as well, and each new person to cross the boys' path is weirder than the last. To Phillips' credit, he doesn't let hysterical cameos by The Daily Show's Rob Riggle and Ken Jeong (Role Models, Knocked Up) run long enough to overshadow his leads, but instead uses them as the springboards for further gags. It's almost like a murder mystery in the way the suspects are lined up, each one adding to the story, taking the detectives closer to the truth. It's a simple-yet-brilliant concept: by showing the aftermath of the debauchery, the lewd behavior never gets tiring or overly gross. It's the amazement of discovery, the shock at what might have happened, that keeps striking the funnybone. Like a horror movie that suggests at gore rather than showing it, it's funnier in our imaginations than it would be if it was actually on the screen.

In the most simple of terms, I loved The Hangover. I laughed loudly and I laughed a lot. While not intelligent humor, it is smart, and though at times wonderfully lowbrow, never cheap. The cast and crew work for your giggles, and their efforts pay big. If you laughed at all at the trailer for this movie, then you will enjoy the rest of it, too--and, no they did not give away all the best jokes already. There's plenty more. So if you like it raunchy, off-kilter, and cleverly dumb, then get ready, The Hangover is one of the best parties of the summer. 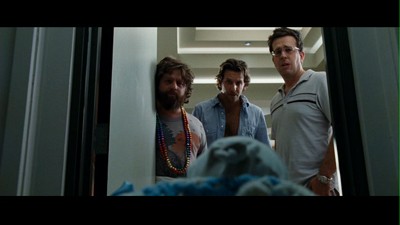 Video:
The Hangover is a two-disc, unrated release, with the unrated version being on the first disc and the original theatrical version on the second. Both are presented at 2.35:1, and both look fantastic. The image is sharp, the colors strong, and generally, this is the kind of top-notch digital transfer we should expect from current movies.

Sound:
There are multiple audio options here. In addition to the main English mix in 5.1, there are also dubs in both French (dubbed in Quebec) and Spanish in 5.1--though, be warned, only the theatrical version has the Spanish option.

The English soundtrack sounds very good, with nice use of subtle effects that add to the atmosphere while giving the full focus to the comedic dialogue. Music can be a little loud at times, but that's only when Phillips lets it take over a scene. (I agree with my fellow reviewer Casey Burchby, by the way, that juxtaposing hardcore rap with lame white guys is a joke that has long since expired.)

Optional English subtitles are available for the deaf and hearing impaired 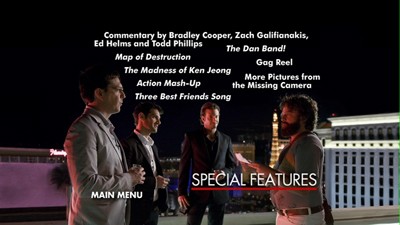 Extras:
The two-disc The Hangover comes in a standard keepcase with a double interior tray and outer slipcover. There is also an insert instructing consumers on how to extract the digital copy of the film from the theatrical-release DVD, which is DVD 2. DVD 1 is the unrated version and nothing more. About eight minutes has been added over the course of the film, but honestly, I didn't really notice all that much. There is really nothing major, just small additions here and there.

DVD 2 leads with a fun commentary by the three main stars and director Phillips. It has some laughs, though it honestly isn't as funny as one would have hoped. Some info shared, some horsing around. About average.

Most of the other extras leave me similarly uninspired. Sure, there appears to be a lot of them, but I didn't want to sit all the way through barely any of them. An extra clip of the Dan Band performing "Fame" is about as tiresome as their ironic lounge schtick (which is right up there with the ironic white hip hop schtick mentioned above), and a longer version of the "Three Best Friends" song performed by Cooper, Helms, and Galifianakis was better off trimmed. Likewise, nearly 8 minutes of improvs in "The Madness of Ken Jeong" will make you appreciate a smart and judicious editor. An 8-minute gag reel is mainly giggling and feels like it's one of those you-had-to-be-there things, and the action mash-up is an inexplicable montage of every point of impact from The Hangover. Okay, don't need that. Hell, even the much-advertised "More Photos from the Missing Camera" proves that we got it all the first time. And 100 more photos? I didn't count, but that didn't seem like 100.

Finally, for anyone who still finds moviemaking mysterious and thinks DVD bonus features can teach you a thing or two, there is a Map of Destruction. This interactive menu is a tour through the locations where The Hangover was shot, with commentary on why these places were chosen and how they were used.

FINAL THOUGHTS:
Highly Recommended. The Hangover became the little comedy that could over the summer. What looked like a frat boy comedy about three aging jerks chasing their youth in Vegas turned out to be one of the funniest movies of 2009. The characters are likable in spite of themselves, and the fun structure of three dudes trying to piece together a rager they have somehow forgotten offers up a variety of rude scenarios. Though the DVD disappoints some--the unrated cut is underwhelming, the extras even more so--The Hangover still yields plenty of laughs all on its own. 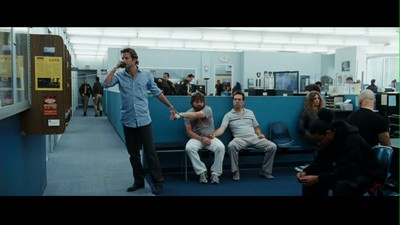