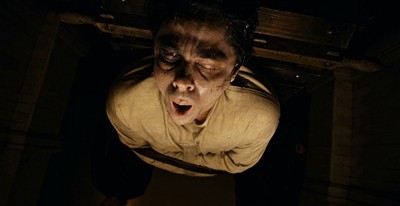 "When the moon is full, the legend comes to life."

Oh, snap! That explains it. I saw The Wolfman on a day when the moon was in its last quarter. No wonder three-quarters of the film were so lifeless. Though, in a contrary move, it's the first quarter that's good, and the rest of it goes flat after that.

This reboot of the classic werewolf franchise stars Benicio Del Toro as Lawrence Talbot, the man who will be wolf. An actor on the New York stage, Lawrence (no one ever calls him Larry, he's far too serious for that) is summoned back to the remote English village where he grew up. His brother Ben has been eviscerated by an unknown assailant, and Ben's girlfriend Gwen (Emily Blunt) reaches out to bring Lawrence home. It seems Lawrence had problems with his father, Sir John (Anthony Hopkins), some kerfuffle over his dead mother and the son being exiled because he was a painful reminder of her suicide. But did she kill herself? That flashback is so suspicious. And why is dad acting all weird?

Naturally, Lawrence heads out to the gypsy camp to see what they might know, and the werewolf that killed Ben attacks at the same time the angry villagers come to kill the gypsies' terrible looking CGI bear falsely accused of the lycanthrope's crimes. A ton of people end up dead, and only Lawrence survives being directly bitten by the beast. This means he is cursed, and a month later on the full moon, he transforms and cuts a murderous swath through the countryside. He even kills a terrible looking CGI deer. The police detective played by Hugo Weaving notes that there are no natural predators left in England, but apparently the truth is there are no natural animals left period.

It's weird anymore how much bad effects stand out. There are a lot of good wolf effects here, including some that were more traditionally put together (make-up artist extraordinaire Rick Baker updated the Lon Chaney wolfman design from the 1941 film), so how are we expected to forgive such obviously fake creatures as these. Shouldn't I then be allowed to pay for part of my ticket with Monopoly money?

Were that all the was bad about The Wolfman, the movie would be fine enough, but that is far from the bottom of this particular barrel. The Wolfman is directed by Joe Johnston, who is kind of a specialist in bland. Even his winners, like the sorely underrated Rocketeer, are a bit white bread. Though he strays into R-rated territory for the first time here, I don't think gore and violence is really where the director was lacking. In fact, Johnston gets a couple of good sequences out of metamorphosed Benicio. The gypsy camp scene and his first night on the prowl are fast-paced and come with a couple of genuine scares. A later romp through London also has some good moments, though the frequent cutaways to the Wolf-cam mess that up. Stick with the long shots, Joe, the close-ups look like a video game.

The most baffling twist in The Wolfman is that it's all the stuff with the people that comes off as unbelievable, not the supernatural material. Right from the get-go, it's clear that the diversions into the human melodrama are woefully underwritten and under acted. Benicio Del Toro is a shocking snooze in the Talbot roll. Though his dark, chiseled features make him look like a mysterious cinema idol from matinees gone by, all the actor does with those handsome eyebrows is brood. Brood, brood, brood. Del Torro was apparently chomping at the bit to play this part, but he has zero fun with it. Heightened senses apparently mean heightened sadness. 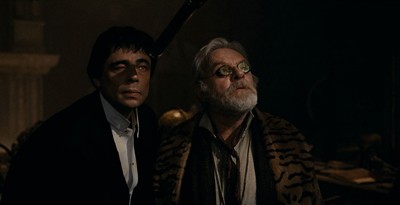 Also, is anyone else just bored to death with Anthony Hopkins? He sleepwalks through the part of Sir John, recycling the same performance he's been giving regularly since 1992 when he played Van Helsing in Coppola's Dracula. Then again, if Danny Elfman is going to openly rip off Wojciech Kilar's vastly superior score from Coppola's movie, I suppose a guy who was actually part of the production should be allowed to pillage the tomb. Hopkins is 72, so maybe he's been inventive enough for one lifetime. I won't begrudge him the paycheck. But still, isn't this just the same character arc he already covered in Mask of Zorro? Getting a guy from a Spanish-speaking country to take over his secret identity?*

Like the special effects mishaps, had the acting been the only problem, I'd still have been willing to forgive. The art direction in the movie is phenomenal. I love the misty moors and cloudy skies, and the re-creation of late-19th century London is wonderful. I'd have been fine with a cool looking movie with a lot of great action, but let's not forget, the clock is ticking, and this two-hour film is going to run out of gas half an hour in.

After that first full moon, The Wolfman starts to repeat itself and cycles through one cliché after another. A passionless love story, a father-son rivalry--it's all been done. This new invention by screenwriters Andrew Kevin Walker and David Self to make Talbot Sr. a werewolf is just plain dumb and comes to nothing. It removes any moral quandary from Lawrence's situation by showing him a clear evil. He is removed from dealing with his own curse, because he can redeem himself by taking out the old man. What nonsense! Like we don't know they only went this way because someone thought it would be a cool gimmick to make werewolves fight. Too bad that when they do, it's almost impossible to tell which is which.

I suppose The Wolfman deserves some credit for not going all audience pleasing and goofy a la the Mummy franchise. What it really needed, though, was a more esoteric director to give it a more creative reimagining. If you're going to rip off Bram Stoker's Dracula, why not steal its greatest virtues? Joe Johnston proves he could never be the man for the job with the insane asylum nightmare sequence; it's like he strung together random deleted scenes from a Marilyn Manson video. Johnston can only do crazy on loan, he can never helm a whole movie that would be as nuts as The Wolfman really needs to be.

Because, you know, a werewolf is about an Id unleashed, howling at the moon, tearing stuff up. The Wolfman is none of these things. It's timid and boring. It's a pretty lady in a bodice that never gets ripped. It howls, but it does so quietly, afraid that someone might hear.

The Wolfman is a quarter moon kind of movie, not a full one. 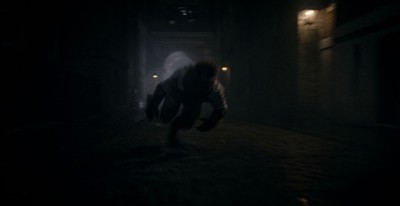 * I mentioned this analogy to my movie pal, and she pointed out that in both movies, Hopkins always surrounds himself with candles. We're pretty sure he did it in other movies, too. Is it in his contract? "Must be in rooms full of candles. No nudity."