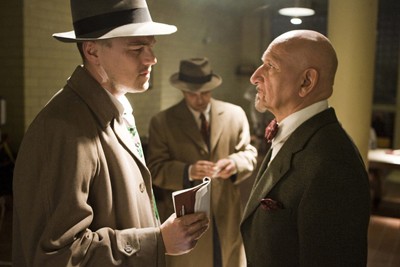 The Ashecliffe Hospital for the Criminally Insane is located in an old Civil War base on Shutter Island, a good distance outside the Boston Harbor. Ashecliffe is the home of some of the most violent and delusional criminals in America. Ward A holds the men, Ward B the women, and Ward C, the one inside the former army stronghold, holds the ones unfit for any contact with other humans. On a dark night in 1954, one patient, Rachel Solando (Emily Mortimer), escaped from her cell. No one knows how she got out or how she got past the guards, but Rachel is gone.

Enter U.S. Marshal Teddy Daniels (Leonard DiCaprio) and his new partner, Chuck Aule (Mark Ruffalo). They come in from the mainland to aid in the search for Rachel. They are tolerated by the enigmatic Dr. Cawley (Ben Kingsley), poked and prodded by the German-accented Dr. Naehring (Max von Sydow), and generally find themselves in a situation far creepier than anything they imagined. When a hurricane hits and the two land-based cops are trapped out in the middle of the ocean with the depraved and the dangerous, that creepiness is unavoidable.

Like the patients on the island, Teddy carries with him some secrets. His wife (Michelle Williams) was killed in a fire, and the man who killed her is supposed to be on Shutter Island--except there is no record of him. Teddy believes there are a lot of off-the-record activities going on at Ashecliffe, and that finding Rachel is his key to unlocking these mysteries. This was his real goal for taking this assignment--find his wife's killer, expose the men who are hiding him. 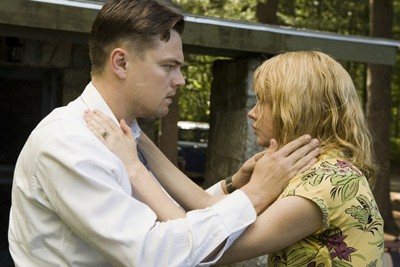 Shutter Island is based on a novel by Dennis Lehane (Mystic River, Gone Baby Gone), adapted by screenwriter Laeta Kalogridis (Night Watch, Oliver Stone's Alexander) and master director Martin Scorsese, helming his first full-length fiction film since he won the Oscar for The Departed in 2006. This, of course, is much cause for celebration in film circles. That said, Shutter Island is an uneven film, and that celebration may likely shift to a reaction of a whole other kind. Martin Scorsese is not allowed to make uneven films. Look at the undeserved bad reputation given to Gangs of New York. As far as some folks are concerned, an uneven Scorsese picture is akin to another director's disaster.

Well, too bad for people who feel that way. I'm not one of them. Despite its flaws, I greatly enjoyed Shutter Island. Scorsese has created a compelling suspense movie, one that mimics Hitchcock* in the way it spins a yarn and that effectively evokes the haunting images of Kubrick's The Shining. At its core, Shutter Island is a ghost story, and its various characters are hounded by phantoms of a past they cannot shake. In addition to having lost the love of his life, who regularly visits him in dreams and in the waking world, Teddy can't forget the atrocities of WWII. As one of the liberators of Dachau, he has seen what one group of men can do to another, and he is horrified that it might be happening again in his own country.

Most of the problems with the movie comes from compressing a 370-page novel into a manageable running time (Shutter Island is over 2 hours). Fans of the Lehane novel will be happy to hear that the book's basic outline is left completely intact. From what I could see, only one new scene had been added (a confrontation between Teddy and Naehring), and though there are many excisions, the movie hits all the major points of Lehane's narrative. Some of the exposition is clumsy, making for flat dialogue--which baffles me, because some of the best writing in the book occurs in the exchanges between Teddy and Chuck. Their funny and often poignant banter, which so effortlessly drove the plot forward, is all but gone. 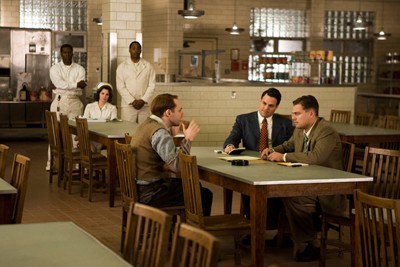 Scorsese trades much of Lehane's text for cinematic tropes, and when he's on point, it works really well. The music by avant-garde composer John Adams bombastically hammers the classic B-horror-movie vibe, reminding me of the appropriation of Bernard Hermann's score in Scorsese's other genre romper, Cape Fear. Flashbacks are folded neatly into the story, and though I feared how the book's detailed hallucinations would come off on screen, Scorsese only keeps a couple of them. He and cinematographer Robert Richards (Inglourious Basterds) turn Lehane's ghastly images into some of the most beautiful nightmares you've ever seen. In fact, it's only after Teddy's most detailed dream that Shutter Island really takes off.

The greatest asset that Shutter Island has is its insular world. Scorsese uses that to full advantage, establishing a place that is off-kilter and unprotected. The weather rages with the same fury as the human heart, and out there, cut off from the rest of the world, Ashecliffe is less safe than an inland hospital. It could be swept away, and who would know? With its cloudy skies and rocky cliffs, landscapses that are half Terence Malick and half King Vidor, Shutter Island has atmosphere to spare, and some of that excess could have been traded for more genuine suspense. The movie doesn't get under the audience's skin enough, and what should have been some of the scarier sequences, like meeting Jackie Earle Haley over in Ward C, come off as a little too orchestrated to be freaky. Had I been more unsettled, I think the revelations in the final act might have played better. Thankfully, Leonardo DiCaprio is there to sell it to us, and his reaction to the things he learns makes the whole scene believable.

Actually, throughout Shutter Island, the actors pick up the material when its sagging. Haley, Ted Levine, and Patricia Clarkson are all marvelous in their cameos, von Sydow is reptilian and weird, and Michelle Williams is seductive and heartbreaking as Teddy's lost bride. Ben Kingsley also does what Anthony Hopkins failed to do just a week ago in The Wolfman: he tears apart a fleshy role in a way only he can do, but without making it seem like the same old thing. But it's DiCaprio's show. He is the man falling apart even as everything else may be coming together. In a dream sequence, he holds his wife as she turns to ashes; by the end of the film, he has grown ashen himself. It's not just make-up, DiCaprio looks like you could flick him and he'd disintegrate.

I'll admit to being a Marty apologist, but let's face it. Most young filmmakers would kill to make a movie as proficient as Scorsese's worst, and every studio is dying for a movie that delivers on half the promise that Shutter Island pulls off without even trying. If Scorsese's best wasn't so good, Shutter Island would be easier to judge for what it is: a pretty intense suspense story. A rickety beginning and some questionable choices in the middle aren't enough to take away from the powerful ending--and though the catalyst that gives way to that ending may seem implausible (and it is), go back, the clues are there. Scorsese knows what makes movies work, and all of that knowledge makes Shutter Island well worth visiting. 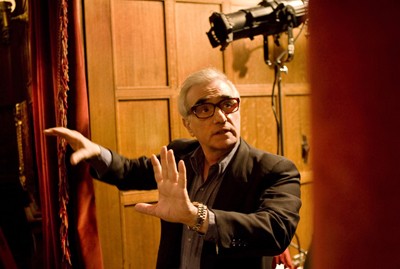 * Surprisingly, Scorsese cuts a reference made to Hitchcock's Shadow of a Doubt that was made in the novel. It's too bad, as those of us who know that film might find some interesting thematic connections between it and Shutter Island.