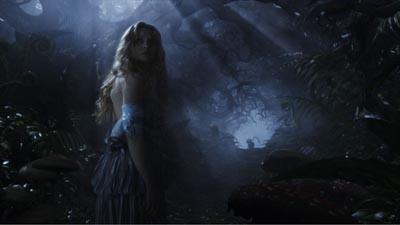 Sometimes filmmakers make it too easy for us. They give their movie a title that is easy to riff on, or they give critics a line that we can single out for ridicule. It's like their anxiety about their own film is showing through, a signal that something is rotten in the Cineplex. In Tim Burton's new version of Alice in Wonderland, several characters continually fret that there is something wrong with Alice, she's not the right girl, this Alice isn't what she used to be. Were I able to crawl into their meticulously designed 3-D world, I'd climb up on that screen and say, "You know what, I have to agree with you."

The 2010 Alice in Wonderland is the story of a girl, played by Mia Wasikowska (Amelia), who is about to leave her teenage years for adulthood. She has lost her father, and her mother wants her to marry an insufferable bore and join well-to-do 19th-century British society. Ever since childhood, Alice has been plagued by dreams starring magical creatures, and while dodging her marriage proposal, she spots one of them, a white rabbit in a waistcoat, darting around the garden. She chases it into a hole in a tree and tumbles down into a strange and fantastical world.

The animals Alice finds there are immediately disappointed. The Dormouse (Barbara Windsor) and the Blue Caterpillar (Alan Rickman) are the first to say it: the White Rabbit (Michael Sheen) has not found the girl that visited them once before and whom a prophetic scroll says will return to kill the Jabberwocky. You see, since little Alice was last here, the Red Queen (Helena Bonham Carter) has taken over and she has turned Underland--previous christenings of "Wonderland" were the mispronunciations of a six-year-old--into a gray, dour place. Much of it is in ruins, and the talking animals who live there have been enslaved to the crazy lady.

Only another crazy person, the Mad Hatter (Johnny Depp), believes that they do indeed have the correct Alice (she keeps insisting she'll wake from this dream), and he puts her on the proper path to rescue the true ruler of Underland before he himself is taken prisoner. Alice must find the White Queen (Anne Hathaway) and become her champion. But first, why not be a little headstrong and break into the Red Queen's castle and free the Hatter?

Alice's grown-up journey is very much like the one she had before, the one we're all familiar with. In fact, what first tips us off to the fact that this is an adventure being repeated is that the animals are baffled that she doesn't know how a shrinking potion or a growth cake will affect her even though she has consumed them before. The various weird characters she meets on her flight from the Red Queen's insidious lackeys, led by a typically wheezy Crispin Glover, are the ones we all know. There is Tweedledee and Tweedledum, played by Little Britain's Matt Lucas, there is a March Hare (Paul Whitehouse), and there is a scene-stealing Cheshire Cat. Stephen Fry voices the cat, and he is a marvelous delight. Voice and animation mesh perfectly to make one wonderful character, a slinky jester who is charismatically feline. 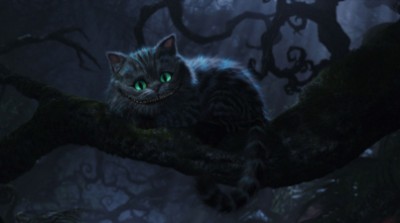 The Cheshire Cat is animated fully on computer, as is the majority of Underland. Some characters are a combination of actors and motion capture. Matt Lucas is turned into twin egg-shaped dimwits, and Helena Bonham Carter is one giant head on a tiny body. Only Wasikowska, Hathaway, and Depp are fully themselves. Crispin Glover, who has trouble maintaining his humanity at the best times, is the oddest hybrid, a herky-jerky splicing of the real thing and a digital creation. It all looks marvelous, like a collection of Mark Ryden paintings brought to life. Burton and his team create a thoroughly convincing, self-contained world, one that is largely a pleasure to look at, even if one has to wonder why there is no "Produced by Hot Topic" credit over the title. (Goths are going to go nuts with the merchandising.) The 3-D effects in a lot of scenes are remarkable, in others just kind of there. My only real complaint is that they were overdone and distracting in the real world. The framing sequences should have been in 2-D.

So why is Alice in Wonderland so unrelentingly dull? Tim Burton has brought so much to life here, it seems counterintuitive that 90% of the movie is so lifeless. A story as tried and true as Lewis Carroll's should be easy to get right. It's survived nearly 150 years and multiple adaptations, after all. Maybe that's the problem, Burton and screenwriter Linda Woolverton were too busy updating the tale, they missed the fun and the wonderment that make it special. Their grand idea here is to crash the party and ruin everyone's good time by smashing all the decorations and breaking all the light bulbs. This bright, lively story is now a gloomy fugue. The "girl vs. dragon" scenario plays like half-baked leftovers from the Narnia films, and the whole thing with Alice the grown-up returning to childhood fantasies is a needless complication. It reminds me as much of Terry Gilliam as it does Burton. Gilliam has a similar problem, he can't leave well enough alone. I remember watching Lost in La Mancha and trying to figure out why his Don Quixote needed a time traveler from the future. I still don't know. Why not just tell it like it is? They call it "Underland," for chrissakes!

It's hard to remember, but there was once a time when Tim Burton made good original movies rather than crappy versions of older ones. I guess at least now that he's remaking his own Frankenweenie he'll know what it's like to screw himself the way he's been screwing others. There are a few good gags in Alice, tastes of the macabre humor that made his early films such a treat. Hell, his fiancée Helena Bonham Carter is up there having a blast. She clearly gets the joke. It makes you wonder why she brought along the old grump. 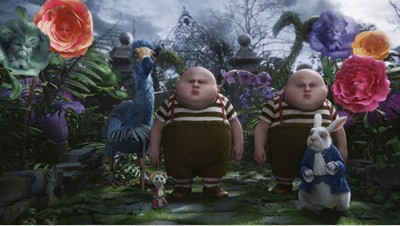 I'm tempted to recommend that people still go see Alice in Wonderland in the theatre. The movie itself isn't so terrible that it's hard to sit through, and the 3-D effects are so gorgeous, they will never look quite as good as they do on the big screen. Then again, it's becoming obvious that 3-D is here to stay, so I'm thinking at some point that should no longer be enough to demand you pay full ticket price. It may be best if that novelty wears off sooner rather than later, just so we can send a message that studios can't get away with skimping on a good script. I've only been out of Alice in Wonderland for a couple of hours, and I remember very little of it. No one scene stands out, nothing makes me think, "That was cool, I'd really like to see that again." Maybe the Cheshire Cat, and that's it. But he's only in three scenes, and that does not a movie make.