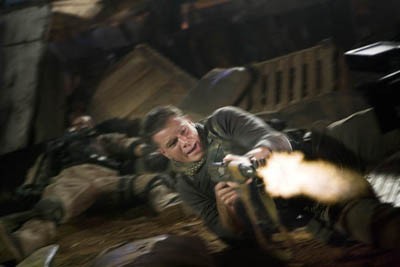 In May of 2003, George W. Bush stood on the deck of an aircraft carrier and declared that our mission had been accomplished in Iraq. Six years later, it stands as one of the more cringe-worthy moments of a Presidency full of many things to cringe about. If you don't agree with that and it makes you mad enough that you want to dash me off a letter to tell me I'm a rube, you may want to pause a second and instead thank me for saving you the price of a movie ticket. Because director Paul Greengrass and screenwriter Brian Helgeland share a similar point of view to mine, and it's a point of view that is an essential part of what is so good about their movie, Green Zone. (Maybe you should go anyway; never hurts to get another perspective.)

In Green Zone, Matt Damon plays Roy Miller, a Chief Warrant Officer in the U.S. Army who is on the ground in Baghdad when Bush makes that speech. Miller is the head of a battalion assigned to checking areas believed to be housing WMDs. Most of their intel is from an Iraqi snitch code-named "Magellan," and it's all been turning up empty. Yet, the man from the Pentagon, Clark Poundstone (Greg Kinnear), insists he vetted Magellan personally and that this information is good, regardless of evidence to the contrary. Miller is tasked to shut up and continue to do his job.

Except the lid is off this particular Pandora's box, and now that the soldier has raised his hand, he can't put it down. A C.I.A. agent named Martin Brown (Brendan Gleeson) thinks something is fishy, too, and asks Miller to keep him informed. Which Miller does after Poundstone gets in his way of interrogating a real source. A local do-gooder (Khalid Abdalla) tips Miller off to a Baathist meeting place, and when Miller and his boys bust in, Saddam's former General Al Rawi (Igal Naor), the Jack of Clubs in the Army's deck of Most Wanted playing cards, heads out the back door. Evidence Miller picks up from the scene points the way to catching the General, but Poundstone's interference raises more alarms. Something definitely isn't right. 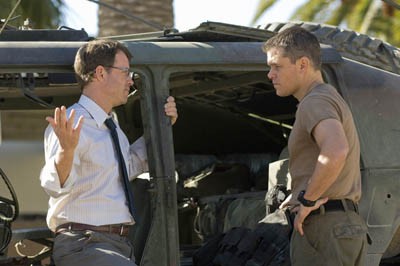 Green Zone is a kind of All the President's Men for the Iraq War, with Damon playing a fictionalized military version of Woodward and Bernstein. This is one of those stories where the more questions the main character asks, the less makes sense, and Roy Miller must follow the information where it goes. This is not simplistic, cut-and-dried politics, however, these are murky waters. Good guys and bad guys aren't as easily defined or identified as they once were. Miller had been the kind of stalwart individual that believed a guy just had to stand up for what was right, do what needed to be done, and he'd get where he was going. Now he's faced with shifting sands and tough choices. At one point, he asks, "I thought we were all on the same side?" To which Agent Brown replies, "Don't be naïve."

Green Zone is also a movie made by the director and star of the last two Jason Bourne movies and the writer of Payback and L.A. Confidential. That means it's not just a political polemic, but a tough-minded action movie that moves forward like a runaway jeep. While much of Green Zone's combat sequences are more about the tense, hair-trigger dangers of wartime investigations, its climax is a spectacular nighttime chase through the dark streets of Baghdad. Helicopters, night vision, snipers--the whole shebang. Stuff gets blown up, people get shot, and Greengrass puts us right down in the thick of it. Green Zone was shot by Barry Ackroyd, who also shot The Hurt Locker, and he brings the same hand-held immediacy to this movie. Those who got a little seasick watching Damon at work in The Bourne Ultimatum can expect the same discombobulation from this, too.

In truth, Green Zone works better as a suspense actioner than it does as a movie "about something," though I do give it credit for going the distance. I find myself wondering if some of the scenes where the best course of action is debated, where Brown warns of chaos and an insurgency and Poundstone tells him that's not going to happen, only come off as heavy-handed because the wounds are so fresh. The sting of deception is still sharp, and we would have to be the ones who are naïve to deny that there were men like Brown and Poundstone in real life, the ones who saw the truth and the ones who buried it. Brendan Gleeson and Greg Kinnear avoid making their characters into caricature, these aren't men lacking in nuance. Really, the movie only veers into cartoon territory in the final verbal showdown between Kinnear and Damon. If the rest of the movie was borrowing its momentum from All the President's Men, I am not sure how Green Zone ended up with the closing speech from Rambo II.

On the plus side, in his quest for the truth, Miller does manage to find out if, deep down, we are all on the same side. As the gunfire settles, as the perfectly arranged representatives of the various factions take their last positions, the humanity emerges. It's not about Republicans or Democrats (neither of which even get a mention), or the passive media (who get roundly slapped for all the blind eyes they turned); it's not even about what group of Iraqis anyone belongs to. It's really about how we should all be able to fundamentally do what's best for ourselves and our people without those who should know better stacking the deck (and putting the faces of men they want to kill on the cards). The movie slightly belittles the larger truth by shrinking it down to cinema size (and we know it doesn't actually get out there), but that's okay.

Because it's also about seeing Matt Damon kick some righteous ass, something he's gotten very good at. Politics aside, since they aren't going to be making another Bourne movie anytime soon, you should take this ass kicking while you can get it. Especially when Green Zone is this worthwhile.