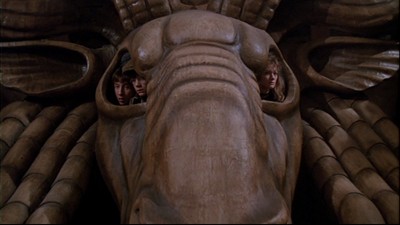 No, we didn't know Paramount was re-releasing Young Sherlock Holmes either. It doesn't seem they bothered to tell anybody, and given that the disc is the same as the one they've been hawking since 2003, I suppose there are good reasons for keeping shtum. One look at the box art and it's easy to see what is going on here: they've redesigned the cover so that it looks like the art for the Guy Ritchie reboot Sherlock Holmes from last year. It's a crass move to be a part of some pretty crass company. Would it have killed them to put any of the actors' names on the box, though? Anywhere? They aren't even on the back cover with the other credits. I realize these guys aren't huge stars, but geez, credit where it's due.

Because after all these years, Young Sherlock Holmes is still a good bit of entertainment. Produced by Steven Spielberg and directed by Barry Levinson (Bugsy, Wag the Dog) from a screenplay by Chris Columbus (who went on to direct the worst of the Harry Potter franchise), this is the kind of adventure romp for all ages that Spielberg was regularly producing throughout the 1980s. Young Sherlock Holmes came out in 1985, a year after his own Indiana Jones and the Temple of Doom, and in a way, this is like the more cerebral version of that film: less gore, more mystery, and a loving wink to the literature of Sir Arthur Conan Doyle rather than pulp serials.

In this gentle reimagining of the story of Holmes and Watson's first meeting, the future detective is played by Nicholas Rowe (recently seen as Rivesh Mantilax on Dr. Who). He meets the nervous and portly Watson (Alan Cox) when the boy comes to his boarding school. They quickly bond, and the relationship dynamic of forward-thinking adventurer and his bumbling pal is established immediately. Holmes is a bit of a misfit at the school, beloved by some teachers, annoying others, and finding jealous rivals amongst the students. An eccentric old professor (Nigel Stock) who keeps trying to build a flying machine is his mentor, and that professor's niece, Elizabeth (Sophie Ward), is the sleuth's sweetheart.

When the kooky professor ends up dead, Holmes realizes that this is one of a string of murders. The local police chief, a fellow named Lestrade (Roger Ashton-Griffiths), doesn't buy the boy's crackpot theories, and a school prank has gotten Holmes expelled. So, he must work in secret with Watson and Sophie, looking for the connection between the deceased and searching for the source of the poisoned thorns that have caused them all to hallucinate their way into a nasty demise.

The hallucination sequences are some of the more famous from Young Sherlock Holmes, alongside Levinson's homage to his producer, when Holmes and Watson pilot the rickety flying machine past the moon. Most of the delirium is shown as stop-motion animation, and though less smooth than we might be used to today, the old-school quality makes it kind of neat. One could even argue that since they are the delusions of dying men, they need not look real, the way dreams often don't look real. One absolutely stunning effect, though, is a knight who steps out of a stained-glass window. This is credited as the first-ever completely CGI effect in a motion picture, and it was overseen by no less than Pixar-hero John Lasseter while he was still with Industrial, Light and Magic. It's a cool looking creation, and the quality of the achievement extends beyond the historical.

Levinson's direction and Columbus's script are both expertly handled, though at times maybe with too much expertise. Seasoned viewers will be able to spot the technique in both men's work. Levinson's mis en scene for the suspense sequences is lifted straight out of old Val Lewton creepfests, and the twists and turns of the plot offer very little that is surprising. Still, it's the kind of stuff that has worked for decades for a reason, and it's no less effective here. Younger viewers who aren't as familiar with storytelling devices will be totally enraptured. Rowe provides them with a stalwart, intellectual hero they can wish they could be, Cox gives them a sidekick they can identify with, and well, it's hard to imagine a teenage boy not getting a crush on a cutie like Sophie Ward. I know when I was 13 I wanted to hop in the flying peddle-bike and carry her off to our own adventures. Kudos, as well, for the filmmakers not pulling any punches with the ending. There are some dark things here, but ones that make sense in the context of making Sherlock Holmes the man he will become. 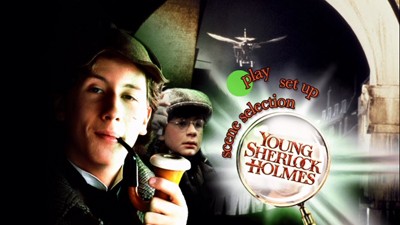 Video:
The Young Sherlock Holmes DVD transfer maintains the film's 1.85:1 aspect ratio, but it's a pretty low-rent port in terms of image quality. There is a lot of dirt and grain, and the darker scenes (of which there are plenty) are hazy. Even by 2003 standards, this disc is weak.

Sound:
For the lack of restoration done on the picture, it's surprising that the movie actually sports a 5.1 audio track, as well as a more standard 2.0. Granted, the 5.1 isn't very intense, but still, there is little to grumble about. There is also a French dub mixed in mono and optional English subtitles.

Extras:
There are none whatsoever. This movie is dying for some history, especially given the innovative CGI.

FINAL THOUGHTS:
Recommended if you don't already own the disc under any of its previous two covers, but only just so. This is a fairly entertaining movie that could actually use a full-on upgrade. If Paramount really thinks a new interest in Sherlock Holmes thanks to Robert Downey Jr. can move some product, why not go the whole way with it? It's been seven years, there's a new format they can squeeze it into. There are dumber moves they could make. Young Sherlock Holmes is a fun flick with cool effects and a story that should appeal to fans of adventure regardless of age. 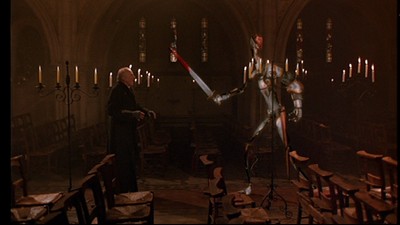