Girl with the Dragon Tattoo, The 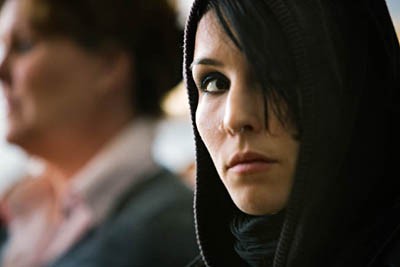 All these things converge in The Girl with the Dragon Tattoo, a new Swedish import adapting the popular novel by Stieg Larsson. The book the first entry in what was a planned ten-part book project called "The Millennium Series," but Larsson passed away having only completed three of the volumess. The engrossing page-turner, broad in its scope and lavish in its exacting attention to detail, became a world-wide hit. Hollywood naturally beckoned, but Larsson's countrymen got there first.

This first cinematic installment in what is now a trilogy was helmed by Niels Arden Oplev, whose most recent film was the quiet religious drama Worlds Apart. There is religion in The Girl with the Dragon Tattoo, and though both films talk about the suppression of women, it comes up here in an entirely different way. Mikael Blomkvist (Michael Nyqvist, Moodysson's Together) is a well-known financial reporter whose work has made him a watchdog for corporate impropriety. At the start of Dragon Tattoo, he has lost a court case for libel and is in disgrace, though he knows he has been set up. With nowhere else to go, he accepts the offer of a rich tycoon, Henrik Venger (Sven-Bertil Taube), head of the sprawling Venger Concern, to dig into the disappearance and murder of his niece. She vanished without a trace in the mid-1960s, and no one has been able to crack the case. To gain access to the crime scene, Blomkvist moves to Venger's remote island, where most of the surviving Vengers live. Needless to say, the family doesn't like this reporter sniffing through old business, especially since they are all suspects.

Back in Stockhholm, private investigator Lisbeth Salander (a remarkable Noomi Rapace) is quietly monitoring Blomkvist's life. Venger had hired the security company she works for to look into the journalist, and even though the job is done, the nagging question of why he took a dive in court lingers. Salander is the "girl" of the title, a goth chick who is tough as nails, good at her job, and completely detached from regular life. (In the book, one character intimates that she may have Asperberger's.) Lisbeth has a troubled past, most of which is left up to mystery in one of the film's many cuts, but her life is made more complicated by a change in her state guardianship. Her new overseer (Peter Andersson) is, to put it mildly, a total creep, and how Salander deals with him is an important key to understanding her character.

Also important is to know that the subtitle for this story is "Men Who Hate Women," and the connector for all of these elements is the violent action males take against females. It's pretty strong stuff, and the movie doesn't pull any punches. The squeamish may find The Girl with the Dragon Tattoo hard to take at times, but to tone it down would be to lessen the emotional importance of the story. Screenwriters Nikolaj Arcel and Rasmus Heisterberg do an excellent job of balancing the more evocative elements of the book with Larsson's obsessive adherence to procedural detail. (In the novel, we are even told what e-mail program Lisbeth Salander uses.) There is a lot of narrative to distill into two-and-a-half-hours, and they rightly jettison most of the financial subplot, remove Blomkvist's various love affairs, and compress a lot of history into some fairly neat exposition. Though they move around some elements (Salander's knowledge of Blomkvist starts earlier, his prison sentence is later), the writers still don't solve the novel's structural problems. I remember getting to the solution to the mystery and realizing I had something like 100 pages yet. In the movie version, it's another 30 minutes. It's tough to wrangle a false climax, particularly when the real climax is not as flashy. (The book's conclusion is better. It's tougher. The novel is a richer experience overall--surprise, surprise.) 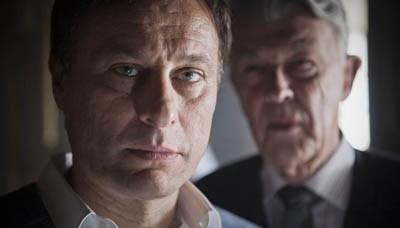 Even with those qualms, the main mystery is satisfying, and the story is propelled by the excellent casting of its two central characters. Michael Nyqvist actually makes Blomkvist a more convincing lead than he was in the book. The actor is more solid than I pictured the reporter, more comfortably aged. As written here, Blomkvist's fatherly quality really comes through. He is compassionate and good humored, and his welcoming the strange goth girl into his life makes a lot of sense.

Lisbeth Salander is one of the more bizarre and compelling characters of modern literature. Stieg Larsson builds her piece by piece in his novel, making her into a complete character who is only outwardly enigmatic. In a film, the director doesn't have the benefit of the extensive prose that lets us inside Salander's head, and so it's all down to the actress who plays her. I had no idea how anyone would ever bring Salander to life--I always pictured her as a Ross Campbell drawing, not an actual human (at least physically)--but now that I've seen Noomi Rapace in the role, I don't know how I am going to read the other two novels and not see the actress in my head. So much happens to the character in this movie, and very little of it is articulated. It's a part that could have easily dipped into caricature. Rapace is left to do most of her growing through expression, and a well-placed, subtle smile speaks volumes. Physically, she is exactly as Larsson described her, and we never have any doubt that this girl is totally badass.

Niels Arden Oplev also manages to make a visual feast of what is, in all honesty, a lot of paper shuffling. The crime in The Girl with the Dragon Tattoo is solved by looking through boxes of old files, nosing around on Google, and staring at the same photographs over and over. Oplev makes sure the movie is never dull to look at. He correctly ascertains that our interest can be held as long as his camera probes the evidence with the same enthusiasm as the people on the screen. 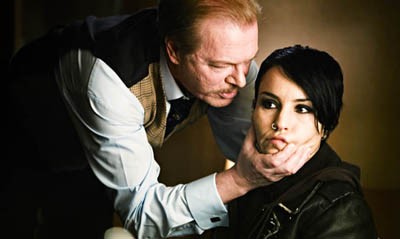 Hollywood is already gearing up for their own version of The Girl with the Dragon Tattoo, and as of this writing, David Fincher is attached to direct. Fincher worked similar magic in Zodiac, one of the best crime films of the last decade. It's going to be quite a challenge to step out of Oplev's shadow, though, the director has done the job too well here. It's the same problem the U.S. filmmakers are going to face in trying to redo and reset Let the Right One In. The Swedes are staking their claim as the masters of turning big books into efficient cinema, and in both cases, they are stories that are decidedly Swedish. Relocating them to another climate is dangerous business. Why not leave well enough alone? Carey Mulligan and Kristen Stewart are in contention to play Salander, but neither is going to get anywhere near Noomi Rapace. It'll feel like the big screen version of when actors leave a sitcom and the producers replace them with a similar actor and try to pretend nothing has changed. Sorry, ladies, but Dick York will always be Darrin Stephens, and Noomi Rapace will always be Lisbeth Salander.

My advice to filmgoers: don't wait for the second version, see The Girl with the Dragon Tattoo now. Don't wait for Hollywood to screw it up. It's too good the way it is to accept any substitutes. This is your chance to see the real Beatles while all your friends will only end up going to see Rain.