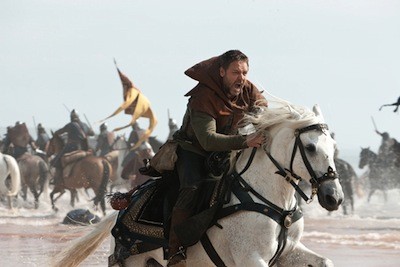 Total running time on the new Robin Hood movie is 140 minutes. Out of those, only about 2 minutes are the movie you really want. The other 138 are all set-up, laying the groundwork for what they believe will be an inevitable sequel. If there is any justice in the world, that movie will never happen, but if it does, tickets should be free, because after watching this flaming bag of arrows, I feel like I've already paid more than enough.

This new Robin Hood comes to us from the team of director Ridley Scott and actor Russell Crowe, the pair that made the far more successful Gladiator and American Gangster. The final script is credited to Brian Helgeland, who has written some good movies (L.A. Confidential, Mystic River), but in this case has his hand in with at least four other writers, none of whom could polish this medieval horse apple. (Among those four are Ethan Reiff and Cyrus Voris who, to be fair, apparently began with something completely different than what is currently stinking up Multiplexes.) In this bold new take on the Robin Hood legend, the offenders strip away the fun bits of the tale--that Robin Hood is a merry man robbing from the rich and giving to the poor, living the life of the rapscallious outlaw--and instead give us the dour Robin Longstride, an archer who is suffering a huge hangover from fighting ten long years in King Richard's Crusades. As the King, Danny Huston gives what amounts to the only interesting performance in the movie. He dubs himself "Richard the Mangy Lion Heart." He is a defeated, sad warrior, and the heaviness of his duty makes him compelling to watch--and for that, he must be taken out of the story. Because without Richard sprucing things up, his younger brother, the selfish and vain Prince John (Oscar Isaac, The Nativity Story), can take the throne. "My brother fought in the Crusades and all I got was this lousy crown."

Long, long story short, Robin returns to an England in turmoil. Having disgraced himself as a man of principles, Longstride gets back home by parading as another man, the honorable Robert Locksley. When he finds Locksley's hometown of Nottingham in ruins, taxed to the brink of destruction, the real Locksley's father (Max von Sydow) asks him to pretend to be his son so his daughter in law, Lady Marion (Cate Blanchett), can keep their land after the old man croaks. No time for happy wedded life, though. King John's right-hand man Godfrey (Mark Strong, who has a landmark deal to play every villain in every movie this year) is surreptitiously using his tax-collecting homeland crusade to cripple England's wealthy landowners and make way for the French to invade. To stop this, Robin must engage in regressive therapy ("Close your eyes") and find his true destiny as the grunting leader of armies and squelch the invasion. I kid you not. The final reel is like Bravehood. Or maybe Saving Private Hood. This time, though, it's France that's storming the beaches and their soldiers who are getting shot to hell in endless scenes of underwater carnage. You think it sucked at Normandy, those boys never had to deal with Russell Crowe or Ridley Scott's Flying Arrow Cam. 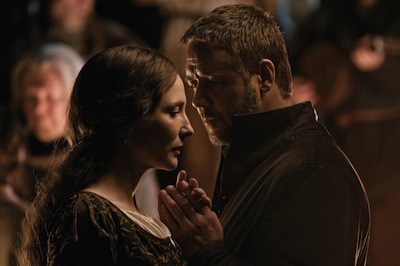 I could hammer on all day about how dull this movie is. It's like a scene from Up in the Air in my office right now. "Are you mad at your keyboard?" "No, I type with purpose." Suffice to say, Robin Hood is about as bad as bloated big budget movies get. I really can't come up with anything that would make for a good reason to recommend this movie. Yes, Cate Blanchett is gorgeous and looks like the only one in the movie who smells nice, but this isn't her finest hour of acting. Not that she's to be blamed. There is so much going on in Robin Hood, so many ideas to service, that no one character gets fully fleshed out and so no performance is really complete. Oscar Isaac was kind of good as John, until I realized he'd be much better played by Sacha Baron Cohen. And then I cast Clive Owen as Robin rather than Russell Crowe, and suddenly there was this whole other movie in my head and it was way better than the one I was watching.

This is, after all, a Robin Hood where the Sherriff of Nottingham (Matthew Macfadyen) is reduced to a bit part. Friar Tuck (Mark Addy) is there, and he still serves as comic relief, but Little John (Kevin Durand) is just an afterthought and Will Scarlet is played by that redheaded guy from ER (Scott Grimes). The merry men only have one heist scene, and it's kind of a joke. Like Perseus finding the mechanical owl in the Clash of the Titans remake, it's the filmmakers giving the audience the finger, making sure that we know that they know what we like, but they want us to know they aren't going to give it to us.

Which, you know what, fine. If you're going to hollow out the Robin Hood concept, go for it, but at least put something back inside. This is just tedium. It's dark and it's dirty and it's never any fun and it's never pretty to look at, and by the time we get to the big money shot, of Robin Hood actually picking up his bow again (he spends most of the big battle fighting with a four-foot-long hammer), it's all been too much. I felt beaten down. Then and only then do we get the tacked-on ending, where out of nowhere King John decides he hates Robin Hood and sends the hero scurrying into Sherwood Forest. That when it sinks in that Folk Hero Origins: Robin Hood is all one big con. In fact, it didn't even occur to me until now, but Ridley and the boys basically warn us in the first half hour. One of our earliest glimpses of Robin is of the man playing a shell game with his fellow Crusaders and bilking them out of their pillage. We all know it's a trick, that Robin's hiding the pea so his marks won't win, all the shuffling around is just meant to distract. That's exactly what the filmmakers have done with Robin Hood, the very thing the bunko artist does with that pea. They hold our mythical hero back until they've taken everything we have, and only then do they say, "There it is!"

Call me a sucker. I totally fell for it. 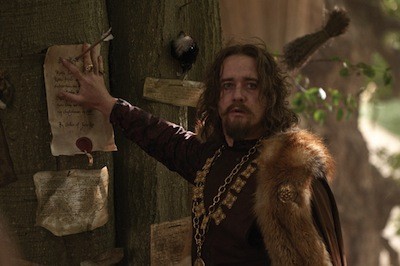