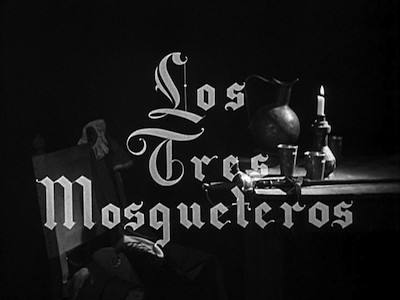 Alexandre Dumas's The Three Musketeers was well-worn cinematic territory even by 1942, but somehow the novelty of transplanting the story to Mexico and having Mexican actors pretend to be French manages to work for at least half of Los Tres Mosqueteros. Designed as a vehicle for Mexico's top comedic personality, Cantinflas (a.k.a. Mario Moreno), Los Tres Mosqueteros doesn't really strike any new ground, but it does manage some laughs before it wears out its welcome.

Cantinflas stars as a layabout who, fresh from jail, stumbles into a nightclub and onto the dancefloor with a beautiful actress, referred to only as "The Queen." When a pair of robbers tries to steal the Queen's expensive necklace, Cantinflas and his friends retrieve it for her. As reward, she invites them down to the set of her new movie, a remake of The Three Musketeers. The guys are mistaken for extras, and Cantinflas makes such a nuisance of himself, he is exiled to a dressing room where a pretty script girl reads him the screenplay, indulging his delusion of playing D'Artagnan. This set-up allows the film to drift into fantasy, and the actor imagining himself in the The Three Musketeers motion picture, bumbling his way along as a swashbuckling hero.

The fact that it takes 25 minutes to get to the point where Cantinflas begins to dream of himself as a French swordsman should give you some indication of how lackadaisical the pacing of Los Tres Mosqueteros really is. The movie runs a total 139 minutes, and it's definitely longer than it needs to be. The stuff preceding the dream is the funniest, with Cantinflas completely in character as the genial no-goodnik, skirting through trouble with amusing doubletalk and playing a kind of Bugs Bunny gadfly, tweaking those who take themselves too seriously and charming the ladies in the process. This continues into the movie-within-the-movie, and I got quite a few chuckles out of watching the comedian insinuate himself into the King's guard.

Los Tres Mosqueteros falters, however, shortly after Cantinflas befriends the Musketeers. Writer Jaime Salvador tries to work the real Dumas plot around the jokes, and any time Cantinflas leaves the screen, the movie stops dead to make way for exposition. The story also comes to a halt several times to make way for songs and dance numbers. Cantinflas cuts two different rugs with the Queen (and only the first one, the present-day hopper in the nightclub, is funny), in addition to a straight-faced ballet performed for the amusement of the French court. The latter, in particular, has no real reason for being in Los Tres Mosqueteros. Structurally, the movie feels a little like a precursor to a Bollywood spectacle in that these moments seem to conform to an expectation of the audience rather than servicing the overall film. Everything takes too long in Los Tres Mosqueteros, and I found myself wishing that even individual scenes would hurry up and get going.

I definitely liked Los Tres Mosqueteros better than the only other Cantinflas movie I've seen, the 1947 comedy El mago (reviewed here and part of a new line of DVDs of Cantinflas's films). The actor is able to display more personality, and the best parts of the film are driven by his presence and comedic style. Still, it's a movie that should end long before it does, and you may find yourself pondering the fast-forward button (or maybe even "stop") before you're anywhere close to the final reel. 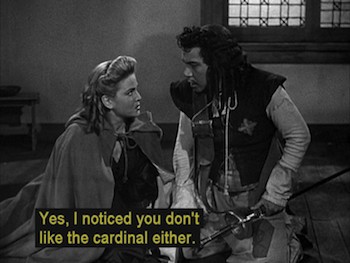 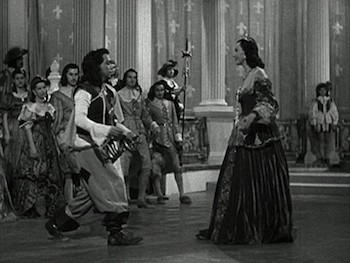 Video:
The anamorphic fullscreen (1.33:1, not the 1.85:1 listed on the box) transfer for Los Tres Mosqueteros is decent. The black-and-white picture is fairly clear, though there is regular scratching and there are some grainy/hazy scenes intermittently throughout. Not bad for a lower-tier movie of this age, but not great, either.

Sound:
The audio on Los Tres Mosqueteros is mixed in Dolby Digital and sounds pretty good. I didn't notice any background noise or hiss. However, like El mago, the only English subtitles available are intended for the deaf and hearing impaired. Like I explained in my prior review, this means we get sound effects spelled out, and even worse, the dialogue is split on the screen between characters rather than being centered on the screen like we are used to with foreign films. The titles are in yellow, and they have a solid black background behind them, obscuring part of the picture [see screencap above]. It doesn't make any sense to undercut the potential English-speaking audience this way by offering a less-than-ideal translation. [see the pics in that review]

Extras:
None. And as I suspected when I first watched El mago, the menus for the new line of Cantinflas DVDs are generic and are the same on every disc.

FINAL THOUGHTS:
Rent It. Los Tres Mosqueteros is a redo of the classic Three Musketeers story. It's designed to show off the comedic talents of Mexican comedian Cantinflas, and for a least the first 1/3 of this 1942 motion picture, it works. The actor's persona is allowed to shine, and it's very funny; however, Los Tres Mosqueteros starts to get bogged down in plot points and unnecessary musical numbers, ultimately clocking in at well over two hours. It's not a terrible movie, just an overly long one. 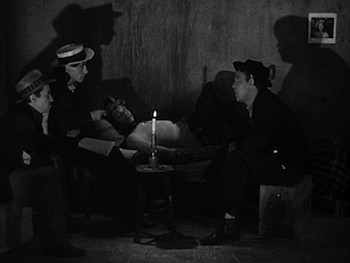 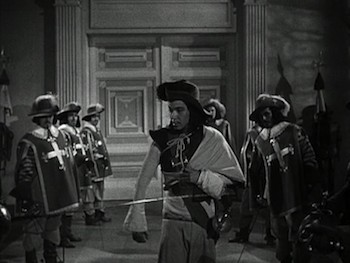