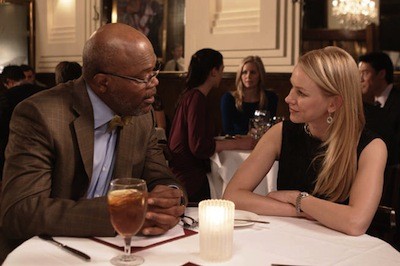 Story 1: When Karen was 14, she got pregnant and had to give her baby up for adoption. Flash forward 37 years, and Karen (now played by Annette Bening) is a resentful physical therapist in Los Angeles who cares for elderly patients in the day and then her dying mother at night. She has trouble connecting with people, her entire focus is on the child she lost, and she will tell anyone outright that she is demanding and if they find her words harsh, they best move along. She meets Paco (Jimmy Smits), a nice man her age who is also a therapist, and for some reason he finds her disagreeable nature charming.

Story 2: Elizabeth (Naomi Watts) is a lawyer who can't stay put. At 37, she returns to L.A., her hometown, and starts working for Paul (Samuel L. Jackson). Elizabeth knows what she wants and doesn't mince her words to get it. Paul, for some reason, finds her disagreeable nature charming, and they have an affair. Elizabeth, as it turns out, was adopted, given up the day she was born to a 14-year-old mother, and she has spent her whole life avoiding connections.

Story 3: Lucy (Kerry Washington) and Joseph (David Ramsey) are a young married couple who can't conceive a child and so want to adopt. They are introduced to Ray (Shareeka Epps), an expectant mother with high standards for who she will allow to parent her baby. Lucy and Joseph try really hard, but it's clear that Lucy wants it more. Also, Ray has her doubts. Notably, Lucy and Ray both have contentious relationships with their mothers (S. Epatha Merkerson and Lisa Gay Hamilton, respectively).

Karen doesn't get along with her mother, either. Which is funny for a movie called Mother and Child, a well-intentioned and often well done melodrama that has at least one story too many and a muddled sense of its own mission. Being that this is a modern Hollywood tearjerker of certain pretentions, you can expect that all three stories will end up converging at some point. The connection between Karen and Elizabeth is pretty obvious, and writer/director Rodrigo Garcia (Things You Can Tell Just By Looking At Her) doesn't spend any time trying to hide it. In fact, he is so blatant in his attempts not to hide it, I half expected it was all a ruse and we'd find out they weren't mother and daughter after all. 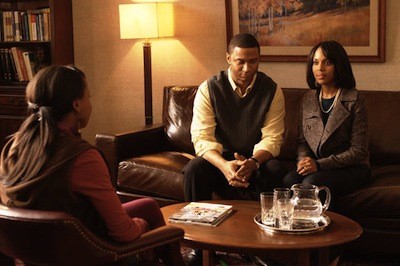 Lucy's story takes a little longer to cross paths with the others, and when it finally does, it's one of those convenient "she was right there all along" plot twists that often make movies like Mother and Child so hard to swallow. Garcia is really making two different movies, and though Kerry Washington, who prior was perhaps best known for Dreamgirls, is spectacular as the nervous mother to be, she doesn't have the name that Bening and Watts do, so her story gets short shrift. In fact, there are long stretches where Garcia seemingly forgets that he has a third story line. It's so poorly integrated into the plot that he doesn't even bother with a realistic timeline. Ray's final trimester is longer than another character's entire pregnancy.

I got the sense watching Mother and Child that Garcia either never knew what he wanted his movie to be, or he just bit off more than he could chew. Given that his executive producer is Alejandro González Iñárritu, we can maybe put some of the blame at his feet. Iñárritu is the man who set the trend for these everything-is-connected films. He did it well back when he directed Naomi Watts in the exceptional 21 Grams, but he set the standard for the over-wrought self-importance that regularly infects this genre when he made Babel. His fingerprints are all over Mother and Child.

During her interview process with Ray, Lucy is asked whether she believes in God. She says she does not, that she instead believes in a determinist philosophy in which each individual makes her way based on hard work and luck. I took this at first to be the movie's central philosophy, but after Jimmy Smits's character gets chastised by his daughter for being an atheist, I started to wonder what Garcia was really playing at. Certainly his portrayal of Karen and Elizabeth flies in the face of Lucy's credo. They've never met, but they both have the same curt manner. Is it, then, all in the genes? On one hand, Mother and Child is a Sirkian soap opera, in which case a naturalistic, "be good to each other" moral code would match the format traditions; on the other hand, this is like a small-scale pro-Life version of Crash, and I am being preached at from under the table. 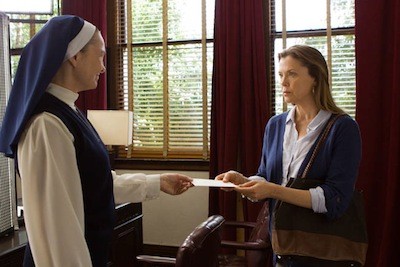 Garcia's directorial style is maybe more effective than his writing style, but that just might be because he doesn't try as hard. He and director of photography Xavier Pérez Grobet (Music and Lyrics) have shot a clean picture, and their camera moves never call much attention to themselves. It's almost a style that isn't a style. The movie isn't exactly pretty, but it does look good. Much of Elizabeth's scenes are purposely sterile, while Karen's gradually grow warm as the woman also warms up. Mother and Child is really carried by the strength of the actresses in front of the camera more than the skill of the men behind it. Though Washington has the stand-out performance, both Bening and Watts are predictably good. They get the emotional timbre of their parts just right. Bening in particular plays Karen as a little odd, just robotic enough to give us the sense that Karen's pistons aren't all firing as they should. When Paco calls her a "weirdo" during an argument, it's the most perfect insult he could have come up with. Jimmy Smits is also very good, bringing real heart to what could otherwise be a pretty thankless role. He plays to his age, as do all the performers. Credit, too, for not making any of the men cartoonishly evil. That would have really tipped the melodrama scales the wrong way.

When it's all said and done, I kind of liked Mother and Child, and I kind of hated it. There are a lot of good individual scenes and some sincere efforts to tell stories about how adoption affects individuals, but at the same time, the movie gets indulgent and the writer/director seems to think sincerity is enough. Maybe it is sometimes, but you have to go all the way with it, you can't shoot for the middle. It doesn't make for a very memorable film, or one that any supporter is going to want to staunchly defend. Say a lot or say nothing, but for heaven's sake, stop mumbling.