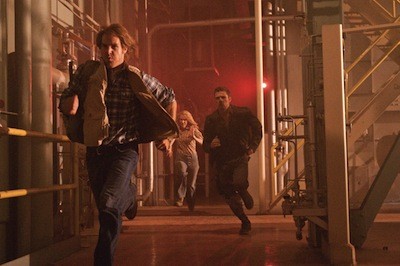 MacGruber is a special forces operative who has been out of commission for ten years. Renowned for his tenacity, his abhorrence of guns, and his ability to rig up sweet life-saving contraptions with whatever junk he finds on hand, the man is legend. When America is under threat of a nuclear device that has ended up in the hands of the man who murdered MacGruber's bride on their wedding day, the defender of freedom is at last compelled to leave his monastic retreat and once more don a ski vest in the name of liberty. He can defuse a bomb in three minutes, but can he make us laugh for 100?

MacGruber is a new movie based on a long-running Saturday Night Live skit. No regular skit, either, but one that tends to run for less than two minutes, making it especially malnourished as fodder for adaptation. It's based on the 1980s Richard Dean Anderson television series MacGyver, in which the titular hero got out of all manner of scrapes using his ingenuity and, well, whatever junk he found on hand. The humor in MacGruber is that his efforts never work. Thankfully, the movie itself is more like a MacGyver contraption. It works, even though it really shouldn't.

Co-written and directed by Jorma Taccone, one of the members of the Lonely Island comedy team that's responsible for the SNL digital shorts that have been viral sensations for the last several years, MacGruber is an absurd comedy tour-de-force. It stars Will Forte as the one-named troubleshooter, an earnest but ultimately stupid soldier of misfortune. His nemesis is Dieter Von Cunth, played with method relish by Val Kilmer. In most SNL movies, they'd drive the villain's last name into the ground, but in one of the many smart choices that sets MacGruber apart from most SNL movies, Taccone and Forte (who also co-wrote the script alongside John Solomon) lightly pepper the joke throughout, leaving it by the wayside until we're just about ready to find it funny again. It's one of many running gags that keeps the film lively. I laughed heartily and I laughed steadily, and if there is any justice, MacGruber will be one of this summer's comedy hits. When thinking SNL films, think Wayne's World, not Coneheads. 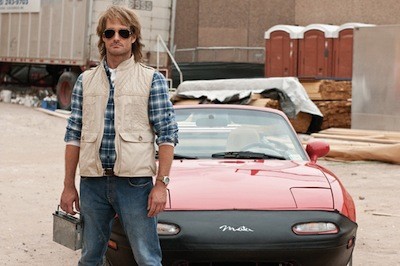 Forte is a daring comic talent. There is little that he doesn't seem game for. For instance, prepare to see his bare behind a lot in MacGruber. Prepare to see stuff stuck up it, too. Be warned now, the gags here are often quite profane. There are F-bombs and sex jokes all over the place. The comedic formula is that when MacGruber isn't screwing up, he is being crass, and sometimes he pulls off both at the same time. Taccone drops this outlandish scenario right into the center of a 1980s action flick, capturing the lighting nuances of the John Rambo franchise or the douchiness of a Steven Seagal performance with hilarious accuracy. Backing Forte in his endeavors are Ryan Phillippe as the rookie partner and luckless straight man and the divine Kristen Wiig as the female sidekick. Wiig is a fantastic performer who often falters under samey material. She is spot-on here. Her character Vicki St. Elmo is the shy girl caught up in MacGruber's gung-ho schemes, and it's usually up to Vicki to make the faltering apologies after. Kristen Wiig has a way of letting a line trail off into anxious silence that kills me every time.

MacGruber isn't the kind of movie that requires deep analysis. It's a comedy that wears everything it has right on its chest. From the so-bad-its-good soundtrack of '80s radio hits down to the over-the-top photo montage that plays over the end titles, MacGruber doesn't worry about subtlety. A laugh is a laugh, high or low, so the team just barrels through and grabs them wherever and however they can get them. It's the kind of chutzpah that can hit really well (Anchorman), but can also fail miserably (just about every other Will Ferrell vehicle, The Goods). MacGruber may not yet be in the league of Ron Burgundy, but he's close. He certainly delivers the laughs-per-minute to make it well worth your ticket price.

Listen, you got two choices. You can pick this movie, or you can pick another movie. You should pick MacGruber, because you know MacGruber would do it for you. Plus, you can be reasonably assured this one won't blow up in your face. Can you say the same about the new Shrek?