Good, the Bad, the Weird, The 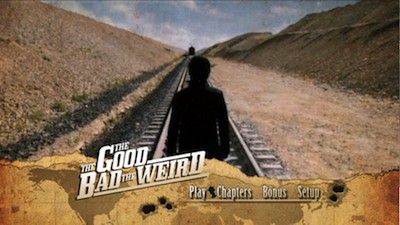 The Good, the Bad, the Weird is a movie that doesn't just go over the top. Each time it climbs a particularly dizzy height, it peers out on the horizon in search of another summit, and then it climbs that, too.

Kim Ji-woon's Sergio Leone homage is being billed as a "kimchi Western." It is in every way Asian cinema's truest response to the 1960s Italian renaissance of the cowboy genre. Set in Manchuria during the 1930s, when China and Korea were occupied by the Japanese, the movie is one long chase, punctuated by occasional gunplay and slaptstick humor. Its trio of anti-heroes are a clean-cut bounty hunter (the good), a killer with anime hair (the bad), and a bumbling train robber (the weird). All cross paths at the start of the picture. The killer, Park Chang-yi (Lee Byung-hun, G.I. Joe: The Rise of Cobra), has been hired to rob a Japanese banker transporting a map believed to lead to the greatest treasure of the Qing dynasty. Only, when he gets on board, he finds that Yoon Tae-goo (Kang Song-ho, The Host) has already killed the banker and taken all of his baggage. Also on the train is Park Do-won (Jung Woo-sung), who is on the trail of Park Chang-yi and has just gotten lucky. 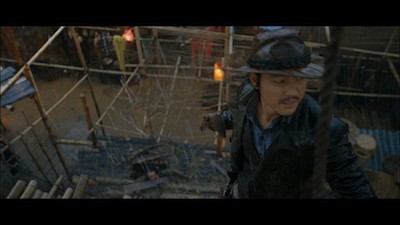 This extended action sequence, which features the three different shooters working independently to stop the train and then coming together in a hail of bullets, is the first in a string of increasingly ludicrous and exhilarating gun battles. As Yoon Tae-goo becomes aware of what he has lifted, he makes a run for the booty, picking up more enemies along the way. By the end of it, not only is he contending with his rivals, including Park Chang-yi's gang, but he's also being chased by colorful bandits and the Japanese army. Horses, jeeps, dynamite, machine guns, mortars--if it can be used to pursue a guy or to try to kill him, expect it to show up. There are even the occasional anachronistic additions just to keep us on our toes. If you are one of those people who worries about where gunfighters get all their ammunition, you'll probably want to see a different movie.

Kim Ji-woon, who also directed A Tale of Two Sisters, crafted The Good, the Bad, the Weird with incredible style. His camera is regularly in motion, and he uses a very wide aspect ratio to get the full panorama. We see the vast expanse of the Manchurian desert, but we also get the larger-than-life close-ups, the zoom-ins on the eyes of the players. The big rectangle allows the director to show all the action. He whips around to follow motion, he chases his fighters through back alleys, he swoops down on them like a hawk. The best part is he does most of it with a minimal use of computer puffery or editing tricks. Some of the trickiest stunts are done live and Ji-woon often lets them run without cutting, just so we can see. One great bit features Park Do-won swinging over everyone's heads and firing his rifle, and though it's hard to tell if it was all done for real, photos during the closing credits show that at least some of it was.

The Good, the Bad, the Weird is meant as an admiring wink to all the films that its participants love, and they do a great job of it. The clothes may be more tailored, but the dirt and the heat are just the same as it was in Leone. The film's score openly references Ennio Morricone, and there is even a nod to Quentin Tarantino, borrowing the version of "Don't Let Me Be Misunderstood" he used in Kill Bill. (I want this soundtrack so bad!) This is a film where it's clear that everyone involved really just wanted to get dressed up as cowboys and run around shooting at each other. Thank goodness they are so good at it. Every ounce of fun they so clearly had is up there on the screen. 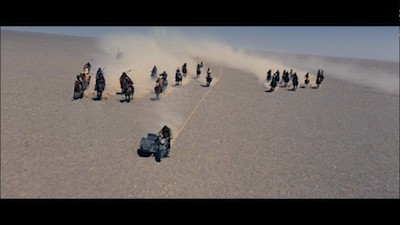 Video:
IFC has released The Good, the Bad, the Weird as a widescreen anamorphic transfer with a 2.35:1 aspect ratio. It's a great looking disc. The colors pop and the fast action looks crisp and clean without any blocking or pixilation.

Sound:
The multilingual soundtrack is mixed in 5.1 and sounds awesome. Big explosions, loud gunshots, lots of stuff kicking back and forth. Just as it should be.

Subtitles are available in Standard English as well as English Closed Captioning. There is also a Spanish track. The subtitles read well and flow at an even pace.

Extras:
The bonus section includes a mish-mash of behind the scenes featurettes and interviews. There is one actual piece called "Behind the Scenes" that runs 15 minutes and shows how a lot of the stunts are done, including the tracking shot in the train scene, wire work over the village, and gunfighting in the rain and on horses, as well as some raw footage of fighting and dialogue. There are no interjections, it's pretty straight stuff, so it can be a little dry. "Making Of, Pt. 1" (3:20) and "Pt. 2" (1:03) are more conventional shorts with interviews and footage, with part 1 talking about clothes, production design, and props. Part 2 is about shooting in the desert.

There are four interviews to go with these. One each with all three main actors, and the fourth with the director. All of these circle the 3-minute range, so none are very substantial.

The Cannes Highlight Reel (3 minutes) is a pretty pointless look at red carpet footage and entrances into the theatre.

Finally, we get the theatrical trailer.

FINAL THOUGHTS:
Highly Recommended. I'm having a hard time thinking of a movie I've seen this year that was as much fun as The Good, the Bad, the Weird. This Korean western owes as much to John Woo and Quentin Tarantino as it does Sergio Leone, and if you think that's a bad thing, then I'm not sure what happened to you to make you so dead inside. Seriously. Go kill a puppy, you jerk! The rest of us are going to geek out and watch The Good, the Bad, the Weird and we'll have a great time without you. 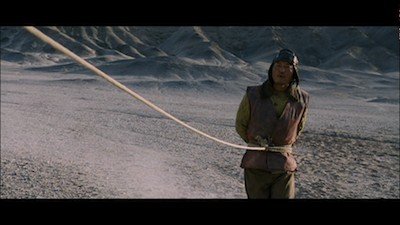