- The Cure, "The Exploding Boy" 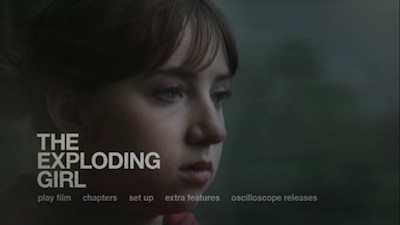 Ivy (Zoe Kazan) is coming home from college on spring break. Though returning to visit her mother (Maryann Urbano) is a positive, having to part with her newish boyfriend Greg is a negative. Ivy's high school friend Al (Mark Rendall) gets a ride back in the same car as Ivy, and then he ends up crashing on her couch when it turns out his parents have rented out his old room. The pair spend their break going to some of the same parties, though Al is far more active than Ivy. She has epilepsy and so has to play it a little more safe. Also, she's worried about Greg, who seems to be growing distant with every phone call. He got in a car accident with his high school girlfriend, which in itself is a bit distressing. Ivy begins to wonder if there are other options available to her.

This is essentially the entire plot of The Exploding Girl, the new feature by Bradley Rust Gray, co-writer of the excellent In Between Days. That film, directed by Gray's wife So Yong Kim, is part of a style of independent films often referred to, in both affectionate and derisive tones, as "mumblecore." It's a dumb term that has been applied to a selection of indie cinema that takes a quiet approach to storytelling. In a film like In Between Days or The Exploding Girl, the premise begins with the idea that every small moment in a life matters. The above synopsis may sound like nothing is really happening, but that is merely an outsider's perspective. If it was happening to you, all that nothing would add up to a very big something, and by putting that something on the screen, the outsider's perspective is dismantled and the audience is invited inside.

The Exploding Girl was shot digitally with the Red One Camera, using real locations, natural light, very little music that isn't "in scene," and live sound. The film has a verite, documentary-style, and is often purposefully subject to the random intrusion of the real world. Rather than shut down a busy street to stage a scene, Gray lets traffic roll by. Cinematographer Eric Lin holds steady on where the actors are, even when a passing truck or automobile obscures them from view. Life is going on all around, and the purpose of the film is to capture a specific part of it. It's surprisingly effective, particularly in confined spaces. A party scene where Ivy feels out of place shows how alienated she is in contrast to everything that goes on around her, and when she hides in the back room, her inability to communicate with Al is given symbolic weight thanks to how quiet their voices are on the soundtrack.

Which isn't to say the composition of the images isn't often quite beautiful. The natural colors of New York in the spring, alongside Ivy's colorful outfits, have a vibrancy that never comes off as contrived. There is also a splendid scene on a roof where birds flying in formation behind Ivy and Al provide the perfect backdrop for an emotional moment. The rooftop pigeons could quite possibly be a nod to Zoe Kazan's grandfather, the famous director Elia Kazan, who put Marlon Brando up on a rooftop with pigeons in On the Waterfront, one of the films that ushered in method acting and revolutionized American cinema. I won't go so far into hyperbole to suggest that The Exploding Girl is part of a similar wave, the style actually has more in common with Michelangelo Antonioni and John Cassavetes and other 1960s pioneers than it signals any revolution, but still, that's a fairly special lineage to pay homage to.

In truth, a movie like The Exploding Girl is entirely down to its lead actress, and Zoe Kazan is marvelous in the movie. She's got the type of face that you can't help but want to watch, her soulful eyes suggesting an inner life and imbuing even the silent scenes with palpable human emotion. If there is one flaw in The Exploding Girl, actually, it's that the quality of Kazan's performance towers over everyone else. Her college boyfriend only shows up on the phone, so he is absent of much personality, and Mark Rendall's Al was a little too mealy mouthed for my taste. Sometimes his earnestness made me wish Ivy would push him away rather than embrace him. Thankfully, there are scenes of less awkward bonding that balance this out. (Granted, my irritation my actually indicate that I am not giving Rendall enough credit; Al probably would be that irritating were I to ever actually meet him.)

All in all, The Exploding Girl is a voyeuristic experience. Many will dismiss it as an empty one, but those who want to go along with Ivy and see how she deals, will find it an emotionally rewarding journey. When so many films are bogged down with exposition and everywhere we turn, someone is trying to explain everything (*cough* DVD commentaries *cough cough*), I find it refreshing to sit down with something that just is and asks me to intuit the truth behind what I am seeing. The Exploding Girl isn't an aimless movie, either. Bradley Rust Gray, who edited the film in addition to writing and directing it, chooses his moments carefully, always keeping his eyes on where he wants his story to go. The final shot of The Exploding Girl, an extended, wordless scene in the back of the car on the way back to school, is beautiful for all it manages to convey. The fact that it seems to do so effortlessly is a testament to the hard work that went into getting all the chaff out of the way so we could end up there. 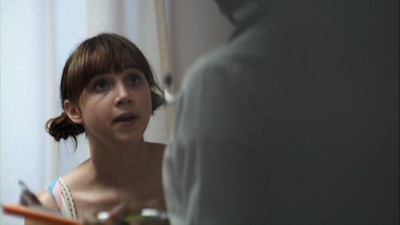 Video:
Oscilloscope Labs has done an outstanding job with the DVD authoring. The Exploding Girl is presented as a 1.78:1 anamorphic image, and the picture is as crisp as can be. The colors are brilliantly rendered, and the subtleties of light and shade are remarkable. The Exploding Girl looks as good as any DVD you're going to see this year.

Sound:
The soundtrack is mixed in both stereo and 5.1. Both audio tracks preserve the natural ambience of the captured sound, with the 5.1 being the more immersive. Every time Ivy's cell phone buzzed, I reflexively reached for my own.

There are optional English subtitles for those who want them.

Extras:
The Exploding Girl is packaged in the trademark Oscilloscope combination of foldable "book" and outer slipcase. I say it every time I review one of their discs, but the presentation is amazing. The graphic design is classy and creative. 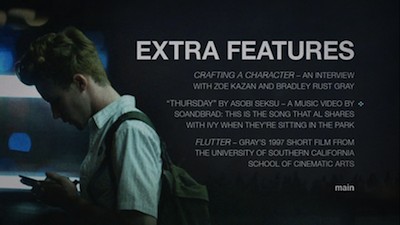 There are several extras on the DVD itself. There is one informational featurette entitled "Crafting a Character." It runs about 13-and-a-half minutes and follows Zoe Kazan and Bradley Rust Gray as they walk the streets of New York and discuss how they imbued Ivy with life.

I was happy to see the inclusion of the music video for "Thursday," the song by Asobi Seksu that is featured in the movie (Al shares it with Ivy in the park). The video was directed by soandbrad, the collective name of Bradley Rust Gray and So Yong Kim.

Lastly, there is a section for exploring more Oscilloscope Labs releases that also includes the trailer for The Exploding Girl.

FINAL THOUGHTS:
Bradley Rust Gray's The Exploding Girl is a patient, quiet examination of one girl's emotional evolvement over the course of a spring break. It stars Zoe Kazan as Ivy, a college-aged epileptic whose faltering romance leads her to consider other options. Kazan delivers the kind of performance that careers are built on. Her talent carries this small story, filling it with meaning and complexity. The Exploding Girl is beautifully shot and smartly edited, and though some may find its restrained pacing off-putting, I found the natural rhythms refreshing. Highly Recommended. 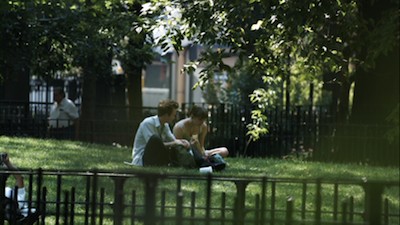