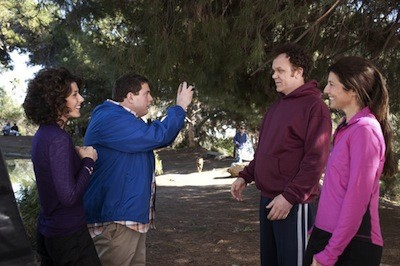 If I were to believe everything motion pictures tell me, then I'd be on cloud 9 after having seen Cyrus. In this movie, we are told that all it takes for John C. Reilly to woo Marisa Tomei is a bad karaoke rendition of the Human League. Having performed my own karaoke versions of Human League songs on more than one occasion, this would fill me with hope for my future were I a gullible person; instead, it plays as the most implausible romantic fantasy Hollywood has come up with since...well, since Marisa Tomei fell for George Costanza on an episode of Seinfeld. Who is this woman's agent and what message is he trying to send her with these scripts?

Reilly plays John, a down-on-his-luck film editor who is still licking his wounds seven years after his divorce from Jamie (Catherine Keener, Please Give). When Jamie tells him she is getting married again, she encourages John to finally climb out of his funk, and she invites him to her engagement party. There, he humiliates himself over and over again, hitting on women using a variety of pick-up lines and even a stab at real honesty. It just so happens that Molly (Tomei) overhears that last bit, and she admires John's vulnerability. One runthrough of "Don't You Want Me?" later, and the two end up in the sack together over at John's house. Next morning he wakes up to find her gone, but lo and behold, it wasn't a dream, she comes back the next night, only to sneak out again.

In a move that is more than a little creepy, John follows her home, driving behind her with his headlights turned off, to try to find out what her secret is. He wakes up the next morning outside her place, having fallen asleep in his car. Never one to wise up and turn back, John snoops around the house and ends up running into Cyrus (Johan Hill, Get Him to the Greek), Molly's 22-year-old son. Cyrus invites John in, plays some of his music for the big guy, and suggests John stay for dinner. He seems nice enough, yet it also seems like there is something really wrong with Cyrus. I'm not talking wrong like this movie's sense of time--um, just how long did John sleep in his car if he woke up just before dinner?--but wrong as in touched in the head. He was home schooled by Molly and the two of them are closer than maybe a mother and child should be. Cyrus the boy sees John as a threat, and Cyrus the movie turns into one long mind game between the two. The prize? Molly's soul! 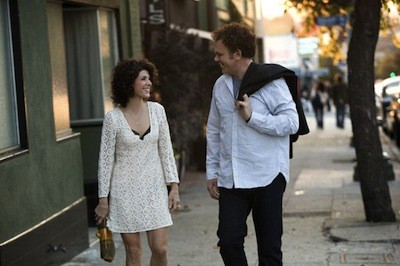 Okay, not her soul, but maybe her heart. Cyrus is the new movie by Jay and Mark Duplass, the sibling writer/director team behind The Puffy Chair and Baghead, two of the better-known entries in the "mumbelcore" movement. While Cyrus doesn't exactly mark a shift into big-budget moviemaking, it is their first time working with a "name" cast. Having such talented actors speak their dialogue makes a world of difference, allowing us to appreciate the Duplass ear for dialogue for more than its mush-mouthed realism. There is actual writing going on here, and some of it is very good.

Unfortunately, some of it is also drastically undercooked. My major beef with the Duplass Bros.' 2008 horror comedy Baghead was that it seemed to have been born of confused intentions. I have many of the same problems here. Cyrus rests in a middle ground somewhere between the darkest of comedies and emotionally fraught indie drama. Is the central conflict meant to be John and Cyrus locking in a cynical contest of one-upmanship, or is it something deeper and more dysfunctional? At different times, the movie works on either level, but neither seems to take hold by the film's finish. The Duplass Bros. stop short of digging out the truth buried in the heart of their story, instead opting for convenient psychology as their exit strategy.

This conflict may be at the root of the Duplass' own artistic confusion. Are they uncomfortable with their increased esteem and thus desperately fighting against it? Though Cyrus has a very basic narrative structure, the script attempts to disguise it by avoiding the big narrative moments, consistently veering around the payoff. Likewise, the camerawork by Jas Shelton is so amateurish and distracting, it has to be a contrived artistic statement. In every scene in Cyrus, Shelton randomly adjusts his zoom, moving in and out of the action in nauseating jumps. I know the conceit is that if the camera appears to be free to probe the scene it is somehow more "real," like this is a documentary caught on the fly. Except that's a false aesthetic. Every documentarian since Nanook of the North has known to leave their camera alone and stay focused on what is happening. Shelton and the Duplass Bros. have achieved the opposite effect: their self-conscious style takes the audience right out of the narrative.

It's such a basic misstep that, at this stage of the Duplass' career, I can only imagine it's one they think they have to force in order to maintain authenticity. This is like when a twee lo-fi band records their third album on the cheap and the lead singer plans where his voice will crack so he can pretend he still hasn't learned how to hit the right note. The band hopes to trick you that it's still just like it was back when they were making music in their garage. It's not the 1990s anymore, guys, it's not cute to pretend you don't have the tools when you really do.

Which brings us back to the actors. The adage goes that a carpenter never blames his instruments when a job fails, but sometimes a well-chosen instrument can add a flourish where otherwise there would be none. The cast of Cyrus is wonderful. John C. Reilly manages to take what is ultimately a pretty unsympathetic character and make him more than a shlub. His activity the day after first meeting Molly is so sweet, we can actually start to suss out what she sees in the guy. I wish Jonah Hill had gotten to go a little farther with his role. Cyrus is a strange, messed-up dude, and Hill only begins to show the barest hints of what's really in the kid's head. Again, that's the fault of an underdeveloped script. It's a tribute to both Catherine Keener and Marisa Tomei that they manage to find some solid ground with their parts, because really there is none. It's their screen presence that makes these women seem real, and it's the performances overall that make Cyrus watchable even when the bottom drops out of the story.

Just imagine how good Marisa Tomei could have been had she been something other than the trophy at the center of this conflict. She needs to be more in movies than just the rock emotionally stunted men lean on. In fact, seeing her in Cyrus left me with one lingering question: If Larry David had been able to foresee Curb Your Enthusiasm, do you think he'd have saved the Marisa Tomei storyline from Seinfeld for when he could have played himself? I know I would have! 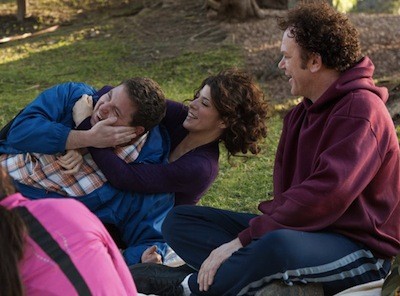