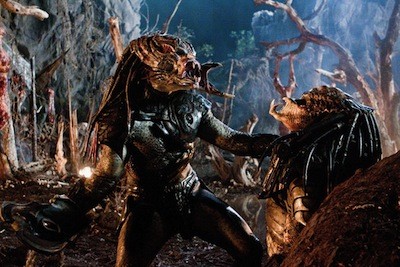 Predators, the new sequel to the sci-fi franchise started in 1987, has one of those whiz-bang openings that lets you know right away what kind of film you're in for. The very first shot features Adrien Brody regaining consciousness to find himself tumbling through the sky. Panic sets in, and he thinks he's going to go splat, but the automatic device on his parachute opens at the last minute, breaking his fall just enough. He hits the ground in the middle of a jungle.

Pretty soon, Brody, playing a soldier of fortune named Royce, discovers other people have been dropped into the rainforest as well. All have been plucked from their lives unexpectedly, all represent the best of the best...or in some cases, the best of the worst. There is a Russian machine gunner (Oleg Taktarov), an Israeli Defense Forces sniper (Alice Braga), a heavy from a Mexican drug cartel (Danny Trejo), a sharp-dressed Yakuza (Louis Ozawa Changchien), and an enforcer from an African death squad (Mahershalalhashbaz Ali). Odd men out are the murderer snatched off of death row (The Shield and Justified's Walton Goggins) and a nerdy doctor (Topher Grace of That '70s Show). How did they get here and how are they going to get back home? Ladies and gentlemen, welcome to the unannounced seventh season of Lost! (Hey, internet, was I fast enough to be the first guy to make that joke? Huh? Aw, c'mon!)

As set-ups for a big sci-fi actioner goes, this is a pretty good one. Concocted by Robert Rodriguez back in the mid-'90s, Predators was meant to be the third movie in the series, upping the ante by upping the amount of fangy bad guys. It's a tried and true narrative device: throw a bunch of disparate people into the story pool and see how they swim. It's Jean-Paul Sartre by way of The Most Dangerous Game. Naturally, an uneasy alliance forms, and as the new comrades search for a way out, they discover things are worse than they could even imagine. Judging by the leftover carnage, it becomes clear they have been brought here to be hunted. More clues lead them to realize they are no longer on Earth, and their opponents are far from human. 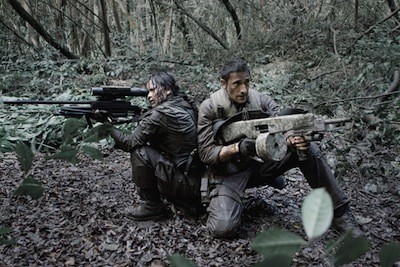 Predators was helmed by Nimród Antal, best known to American audiences as director of the tightly wound thriller Vacancy. (His best movie is actually his 2003 Hungarian pseudo-cop drama Kontroll; seek it out.) Though Robert Rodriguez is on board as producer, his script has been heavily reworked by first-timers Alex Litvak and Michael Finch--so much so that Rodriguez doesn't even get a writing credit. Still, his grimy grindhouse fingerprints are all over this, and his B-movie sensibility meshes well with Antal's slick mastery of a scene. Predators is an entertaining action movie that gets by on sheer momentum and firepower. It leans heavily on the Schwarzenegger original as well as more traditional science-fiction adventure. One of its greatest facets is the orchestral score by John Debney, who digs back into an almost classic 1950s playbook to give Predators the right kind of rah-rah fun.

For its first hour or so, Predators moves briskly. There are some good action sequences, fast-paced jungle chases, and fairly good banter between the prey. Walton Goggins gets several laughs as the slimeball killer, some of them coming in spite of your better judgment and taste. There is also some believable tension between Alice Braga and Adrien Brody, whose characters are probably the most skilled in warfare but whose philosophies often differ. Brody is a nice surprise, playing a convincing bad ass very well. Antal keeps his scenes sharp, and he knows where to put the camera to get the audience down into the action.

That said, the script starts to get a little rickety midway when Laurence Fishburne shows up as Noland, the only survivor of previous hunts. This may have originally been the role for Schwarzenegger or maybe Danny Glover, both of whom had at one time been rumored to reprise their previous franchise characters, but Fishburne makes for a fine stand-in. He's funny and clearly having fun playing at being off his rocker, but his character ends up being little more than a plot fulcrum. Though he launches the rest of the gang into their finish line sprint, there are a couple of bends in the race that don't work as well as others. One high point is the Yakuza's samurai-style showdown with a Predator. Antal almost pulls off a perfect re-creation of an old-school duel. All it needed was a nice blood spray, it would have been just right.

Final act low points include a mano-y-mano knuckleduster where it's too hard to tell who is who and some unnecessary revelations that only seem to be there to goose the audience a couple more times before the show is through. Let's face it, a film like Predators is best when it's the least complicated. It has the kind of plot where you only have to pull one thread to make the whole thing unravel. Give us too much time to think between spines being ripped out or alien faces being bashed in, and you're going to lose us. Predators keeps from dropping off, but just barely. It's a slick piece of entertainment, and while I can't see it taking on the same reputation as the original or even demanding repeat viewings, it's definitely good enough for right now. 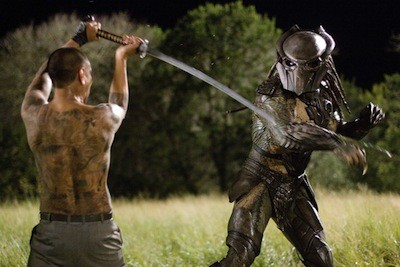