Clash of the Titans


We've all been aware of the proclivity for remakes that Hollywood's been engaged in for awhile, and I've been politely shaking my head at those reinterpretations for awhile now, but the Clash of the Titans remake struck a personal chord for me. I remember seeing the original as a kid in the theaters. The journey with Ray Harryhausen's stop motion-animated creatures was thrilling, scary and wondrous, to say nothing for the fabulous cast of British actors who portrayed the Gods. Now when people ask about that film, there may be some confusion with the 2010 CG-drenched remake. Is nothing from our childhood's sacred anymore?

Phil Hay and Matt Manfredi (The Tuxedo) write the screenplay (along with Travis Beacham) which Louis Leterrier (The Incredible Hulk) directs. Perseus (Sam Worthington, Avatar) is a demigod, son of Zeus (Liam Neeson, The Chronicles of Narnia: Prince Caspian), King of the Gods. Perseus is abandoned by Acrisius (Jason Flemyng, Layer Cake), who is insulted that Zeus would father a child with his wife, and Zeus punishes him, deforming him with a lightning bolt. Perseus and his dead mother are found floating on a coffin in the ocean by Spyros (Pete Postelthwaite, The Omen) and raised as his own. 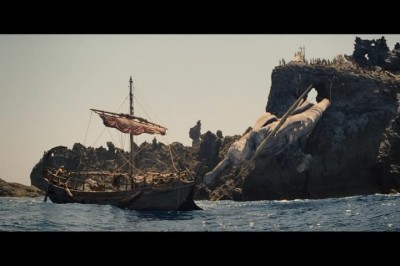 As a young adult, Perseus is fishing with his family near the coast of Argos when the people are tearing down the statue of Zeus. Zeus' brother Hades (Ralph Fiennes, The Reader) sees this desecration and (before destroying Perseus' boat and killing his family), threatens the people of Argos that if they do not renounce this behavior and sacrifice Princess Andromeda in 10 days, the Kraken will be released and destroy the city of Argos. With Perseus known to be a demigod, his help is enlisted to try to find any measure to prevent this from happening, even if it means talking to his father, which displeases Perseus as he wants no part of the immortal world. And like the original film, you follow Perseus' trips to meet the three witches, the half woman/half creature known as Medusa, and Acrisius' new visage, a beast known as Calibos.

Unlike the original film, there are some differences in the film, and those are mainly found on Olympus and with Zeus. He appears as a much more flawed character in this modernized version of the film than when Laurence Olivier portrayed him 30 years ago. And where the old version had Maggie Smith's Thetis helping to manipulate Calibos without Zeus' knowledge, the dynamic between Hades and Zeus in the remake is more intriguing, perhaps keying in more to the duality of man (or God, as it were). Gone is Burgess Meredith's Ammon, replaced by a younger, more spry and battle tested Draco (Mads Mikkelsen, Casino Royale). And considering the action the film has, Draco is a welcome addition into the fold. 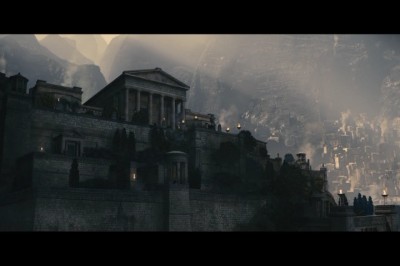 With those additions, there are some knocks to the film's story, with the main one being Perseus renouncing his father's origins and thus perhaps his destiny. Worthington does not have the gravitas or depth or pull this off in a convincing manner, and if the conflict with Zeus focused on Hades rather than devoting some time to the prototypical angry neglected son, I probably would have liked it more. And the purveying feeling I had while watching this was that it was such a conventional action film that it diminishes any homage paid to the traditional. If I'm a young kid watching this remake, am I going to feel the same type of wonder that us older kids got on the Harryhausen version, or am I going to see just another CG action film, except with really cool monsters in it?

That's the big problem that I have with this remake. It's flash over substance, and when substance was integrated into the story, it had the makings of compelling viewing, but owed too much to its journey to the computer-animated creatures. And as an aside, why even show the Kraken in the trailer? You've given away another reason for watching the film before anyone's gotten into the theater, whether it's in 3-D or not. There's a lack of mystique from the characters to the film itself that makes one yearn for the days of Harryhausen. 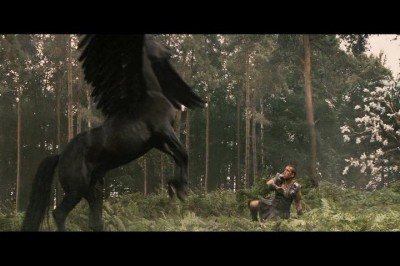 Perhaps that was the big thing missing from the Clash of the Titans remake. Not the stop motion (though that would be somewhat cool), but the mystique, or even the ethos of the first film could have been used here. Instead all we get is just...action, without much to care about in the story. Or at least after the first half hour when the filmmakers release they have to release the Kraken. I'll take my Gods with copious Britishness and enjoy the Harryhausen visuals and like them, thank you very much.


Clash of the Titans is presented in 2.40:1 high-definition widescreen using the VC-1 codec. One of the slight advantages that the remake has over the original is the ability to put you in the middle of the action with the scorpion battle, the fight with Medusa and other action sequences. The attempt to make the Gods look ethereal looks fine, and the exterior shots look lush and have little oversaturation. There are times where the image tends to look a little soft (such as when Andromeda is about to be sacrificed to the Kraken), but the image maintains a good level of detail, DNR aside, and makes for entertaining viewing.


Make sure you've put a protective bubble around your house, because the DTS-HD Master Audio 5.1 surround track is guaranteed to rattle the teeth of your neighbors. It starts early when the people of Argos drag the statue of Zeus into the sea and continues through the battles with the scorpions. In the end sequence with the Kraken, the destruction of large portions of Argos is downright scary (particularly if you're watching with Warner's Maximum Movie Motion extra, like I was after initially watching the film). There are a couple of minor nits to pick, namely the dialogue sounds a touch soft and the directional effects were lacking, even during the scorpion battle scenes. Otherwise, this is an outstanding track.


In lieu of a commentary, Warner gives the viewer a "Maximum Movie Mode" track which includes scores of behind the scenes footage, cast and crew interviews, scene breakdowns and much more for the interested fan. The crew heads for visual effects, production design and other departments discuss how they handled their respective challenges within the framework of Laterrier's intentions, and the director discusses working with multiple writers, along with what attracted him to the film. The cast share their thoughts on the latter also. It's a solid contribution to the film, made all the more so by separate content that allows you to explore the film on a deeper level. The "Focus Points" (35:02) include thoughts on the material and respective characters by Worthington, Fiennes, Neeson and Flemyng, along with how they approached working on the production. More visual effects (and previs) footage is here too, with the effects team discussing what they wanted to accomplish with the Kraken and others. The location shooting in Tenerife even gets a little attention paid to it. Between these two segments you're covered on any facet of the production that comes to mind. 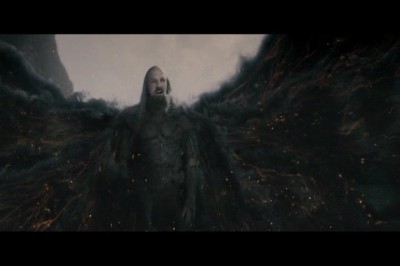 From there, an alternate ending (5:23) puts in an underwhelming confrontation scene between Perseus and Zeus, and eleven deleted scenes (18:10) include a bit of extended footage, but the performance of Luke Evans as Apollo clearly falls victim to the cutting room floor. He meets Perseus before the latter crosses the Styx to meet Medusa and confronts Zeus about Hades' presence, but this subplot added unnecessary friction between the Gods and would have muddied the waters. It's interesting to watch, if for a moment. "Action Hero for the Ages" (7:56) is a profile piece on Worthington, how he approaches making movies and the way he throws himself into stunts and other physical sequences, and unique aspects of this film, such as the swordplay involved. Finally, you get a second disc which has the almost requisite standard-definition and digital copies of the film on it.


The 2010 version of Clash of the Titans is full of all the action, swords and sandals one can cram into 106 minutes of celluloid, but when the last dozen or so minutes are devoted to the credits, it's easy to see why the story got a little consideration, just not as much for this reviewer. Definitely worth checking out for the soundtrack, but I wouldn't add this to my library for this reason alone. Worth a rental at best.