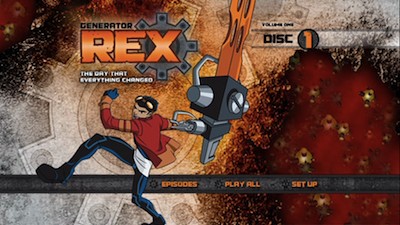 Generator Rex is the new cartoon concoction from Man of Action, the creative consortium previously responsible for Ben 10. Like that successful franchise, Generator Rex is a series about a teenage boy whose extraordinary abilities and heroic gumption is going to save the world. Loosely based on the late '90s comic M. Rex, written by Joe Kelly and drawn by Duncan Rouleau, half of the MoA team, it's a clever, fun, and altogether well-made sci-fi adventure show. The first season premiered on Cartoon Network in the spring of 2010, and this debut DVD release, Generator Rex, Vol. 1, collects the initial 9 episodes on 2 discs.

The story behind Generator Rex is that, several years before episode 1, a scientific catastrophe released an innumerable amount of "nanites" into the Earth's atmosphere. Nanites are, basically, mechanical molecules that were designed for positive use but that had unforeseen negavtive side effects. When activated inside a person's body--and now, apparently, all living things have them in their system--that person can turn into a mutant monstrosity. This gets them dubbed an "evo"--short for evolution, but also an acronym for Exponentially Variegated Organism--and while some live in benign secrecy, many go on Godzilla-like rampages. A mysterious policing organization called Providence now exists to track and fight berserk evos and neutralize their nanites, while also looking for a cure. Providence is led by the White Knight (voiced by character actor J.K. Simmons), who gives orders via a television screen from a secret location. Yes, shades of James Bond villainy are likely intentional.

Providence's secret weapon in the war on the nanites is Rex (Daryl Sabara). Rex is a fifteen-year-old boy with no recollection of his past, but who has several remarkable abilities. His nanite mutation includes, for one, the power to transform his appendages into various mechanical devices--a big gun, giant boots, even propellered wings. He can communicate with machines by touching them and interfacing with their programming. Likewise, when he touches an evo, he can absorb their nanites and return the infected person back to normal. If there is an all-around antidote against nanites, Rex may be the key. 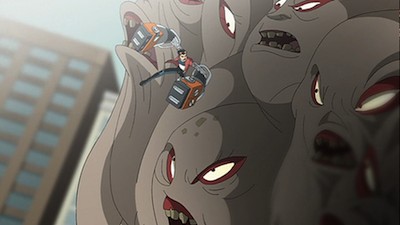 The general plot structure of Generator Rex is fairly classic in terms of serialized animation of this kind. While there is one overall story that develops over time, each episode is a stand-alone adventure. For the most part, these involve Rex going up against a monster of the week, though there are recurring villains, as well. Van Kleiss (Troy Baker) is an evil evo who rules the rogue country Abysus, an alleged evo safe haven. Van Kleiss keeps trying to woo Rex to his dark side--he is like Darth Vader with Hellboy's big hand. As a nemesis, he is Rex's opposite. While Rex's powers are related to mechanics, Van Kleiss' are organic: he controls plants. By the end of each skirmish, Rex has usually learned something more about himself, be it concrete information about who and what he is or some kind of lesson about heroism and sacrifice. Yes, Generator Rex sometimes has a moral, but it's rarely delivered in an obvious, "Okay, kids, here's what we learned" manner. It's part of a hero's journey rather than a mandate to educate the viewers.

Helping Rex out week to week are his two handlers, Dr. Holiday (Grey DeLisle) and Agent Six (Wally Kurth). Holiday takes care of Rex's health and deals with the science side of nanite combat; Agent Six is his trainer and bodyguard. He is pretty much a badass, and most representative of the Generator Rex action style. The fight scenes are super exciting, with Six running in to save Rex's bacon with two swords, like a ninja in a fancy suit. In terms of what to expect from the weekly showdowns, Generator Rex is an effective blend of slick anime karate and Matrix-inspired physics. The show creators consistently deliver on the climactic fight scenes, concocting fresh scenarios for each obstacle or foe Rex is up against rather than relying on formula. This isn't like, say, Voltron, where it's only a matter of time before Rex resorts to some specific big weapon episode in and episode out. Each battle is unique. They also look super cool. Generator Rex is well designed and well drawn, and though there are occasional obvious insertions of digital effects for some of the vehicles, the artists never skimp on setting or character design. This show is among the best looking animated programs of recent memory. The storytelling and editing are sophisticated and inventive, and the monsters are genuinely grotesque.

Likewise, all the characters are strong and even in these early episodes, we can already see them developing along with the plot. Rex is a believable teenager. He's impulsive and headstrong, but he's also hit heavy by the consequences of his screw-ups. In the same way, Holiday and Six are more than types who simply serve a function and never reveal any added complexity. As their attachment to Rex deepens, so too does our knowledge of who they are.

Oh, and did I mention that Generator Rex also has a talking chimpanzee in a fez? Rex's sidekick is Bobo Haha (John DiMaggio), a laser-packing evo simian. You can never go wrong with a talking chimp in a fez. 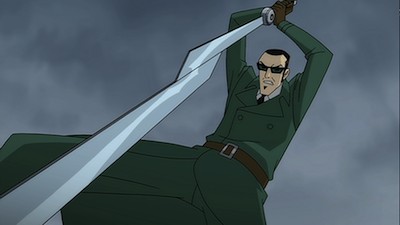 Video:
Nine 24-minute episodes of Generator Rex are spread across 2 discs. The widescreen anamorphic transfers are excellent, with bright colors and sharp resolution. These discs are super clean, no skimping here.

Sound:
The original soundtrack is mixed in Dolby stereo and sounds really good. There is solid balance between the quiet and the loud, with the bombastic fight scenes getting a lot of punch in the speakers. There is also solid attention paid to the show's pop punk musical soundtrack.

Subtitles in English for the deaf and hearing impaired are available.

Extras:
Generator Rex, Vol. 1 only comes with two extras: a music video by the band Orange, performing the cartoon's theme song, "Revolution;" and a video gallery showing concept art for the characters. The illustrations look like they were drawn by Duncan Rouleau, and so they are appropriately awesome (Full disclosure: I have worked with Rouleau and one of his Man of Action co-conspirators, Steven T. Seagle, in the past, including a Predator short story they wrote and drew while I was editing Dark Horse Presents back in 1997). 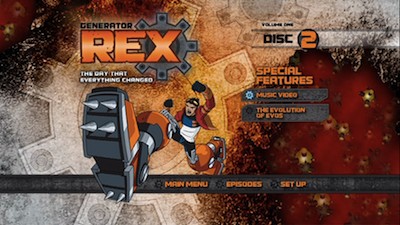 The two-disc set is in a standard DVD case with a hinged tray. A paper insert advertises Generator Rex toys and similar WB/Cartoon Network DVDs. The set has an outer slipcover that is really cool: embossed artwork with a metallic finish.

FINAL THOUGHTS:
Generator Rex is an excellent surprise in the current animation field, filling part of the void for smart adventure that was left when Avatar, The Last Airbender finished. A sci-fi actioner with a likable teen hero, Generator Rex delivers on all fronts: good characters, truly monstrous monsters, thrilling fight scenes, and excellent animation. Since we're still in the early stages, it remains to be seen if the show's full plot will hit the right marks to make this a new perennial, but it's off to a good first run, and thus is Recommended for anyone looking for some cartoon fun--especially the young and the young-thinking among us. I already know a kid I plan to pass this set over to now that my review is done. I think he'll dig it. 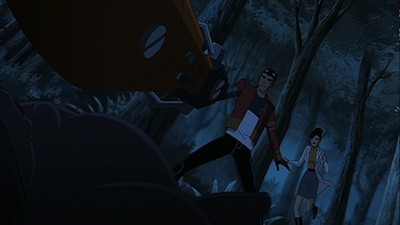