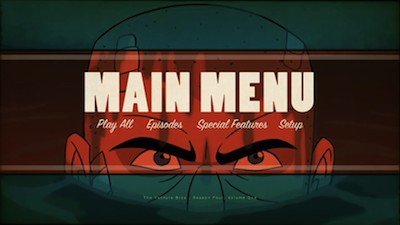 There's been plenty of frustration coming out of Venture Industries in the last year. Delays lead to a mid-season hiatus for Season 4. We had to wait from last December to this September to get the second half of the season, and as I type this, the season finale hasn't even aired (it's tomorrow). It surprises me, then, that Cartoon Network rush released these eight episodes to DVD, releasing The Venture Bros: Season 4, Vol. 1 now that the first season is nearly over, rather than waiting to throw out one big set. The third season of Metalocalypse followed the Venture team into the same Floyd hole (or, really, was dragged there), and their complete season 3 DVD was also just sent to stores with every episode intact. I could have understood had they put out 4.1 just before 4.2 began broadcasting, but this just makes no sense.

I hate to say this, too, but a large part of the problem is that Season 4, Vol. 1 isn't the strongest that the Venture Bros. has to offer. It's not bad. Far from it, there are still a lot of laugh-out-loud moments and great ideas here. The season leads with one of its strongest ever, "Blood of the Father, Heart of Steel." The premiere is told on two jumbled timelines, with sequences based around the presence of the classic comic book Marvel Comics #1, and the progress of the show is tracked by that comic's value rating. It's the kind of clever pop-culture mash-up that has made this cartoon so much wicked fun from the beginning. What began as a parody of Jonny Quest and other Hanna-Barbera "kid adventure" cartoons eventually turned into a full-blown parody of anything and everything that crossed the collective nerd mind of its creative team.

Then again, "Blood of the Father" is one of only a couple of episodes in this collection to feature Brock Samson (voiced by Patrick Warburton). Is it possible that the poodle-haired badass is the true throughline of the show? In truth, the only real problem with Season 4, Vol. 1 is that the eight episodes don't hang together as well as previous seasons. While previous years worked as a cohesive cycle, this half of the season feels disconnected. In music terms, the other DVD sets work as concept albums, where the songs all function as individual tracks, but work even better when consumed start to finish. Season 4, Vol. 1 is more like the B-sides collection. 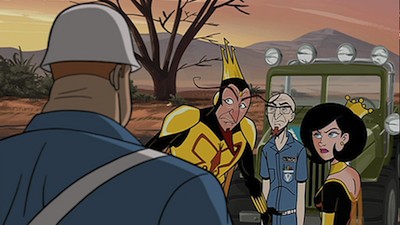 One of the major things that just doesn't work is replacing Brock with Sergeant Hatred (Christopher McCulloch) as the bodyguard to Hank and Dean Venture (McCulloch and Michael Sinterniklaas). A former supervillain who briefly replaced the Monarch as the Venture family's arch nemesis, Hatred is funny in small doses, but not episode after episode. The character is a G.I. Joe parody, Sergeant Slaughter remodeled as a recovering pedophile. Hearing jokes about "Thai boy-girls" regularly gets a little old, and it also takes the bite out of the otherwise funny Batman and Robin spoof Captain Sunshine (voiced by the animated Batman, Kevin Conroy) and Wonderboy, which is the focus of episode 2, "Handsome Ransom." Guys, if you keep up with this molestation stuff, we're all going to start wondering about you....

There are definitely individual highlights throughout the season. The writing team, which is mostly Doc Hammer and series creator Jackson Publick (often credited and listed on IMDB as his alter-ego Christopher McCulloch), casts their net wide for subjects to lampoon. In this season, we see a variety of pop culture references, some new and some returning, including the Six-Million Dollar Man ("Blood of the Father,") progressive rock, The Shining (episode three, "Perchance to Dean," and featuring comedian Reggie Watts as the "psychic" black man), Lord of the Rings ("Perchance to Dean" and "Self-Medication), and undead comic book characters like Ghost Rider and Deadman ("The Better Man"). The concept of famous rock stars as villains is expanded past David Bowie. Turns out that Buddy Holly and the Big Bopper didn't die, they were recruited to be bad guys ("The Revenge Society"). Also, we meet more aging boy adventurers when Rusty (James Urbaniak) goes to group therapy in "Self-Medication." The new guys are voiced by Patton Oswalt, Seth Green, and John Hodgman. 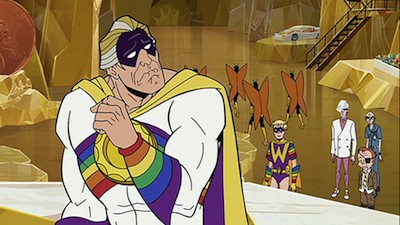 Thematically, one thing I did like about Season 4, Vol. 1 is how Hank and Dean are experiencing the trials of adolescence. With Brock gone and the endless string of clones that were used to replace the boys anytime they got killed (which was often in the early seasons) having been destroyed, they no longer have a safety net. Dean struggles with girls and that supposed moustache growing on his upper lip, whereas Hank misses Brock and his manly guidance. Neither feels all that connected to their father. Rusty wants Dean to be a scientist like he is, and Hank to, well, just shape up. By the sixth episode, "Self-Medication," when Hatred is off his meds, they have to figure out how to take care of the situation themselves. Yeah, heavy stuff for a cartoon, I know, and kudos to the Venture team for not sticking to the old model of keeping the characters exactly the same, never growing up or changing their look, for an entire series.

The mid-season finale, "Pinstripes and Poltergeists," ends on a good note, restoring a little bit of the status quo by showing us what Brock has been up to all this time. It definitely helps the second half of the season, which I assume will be on DVD sometime next year, get back on track (including a rivalry between Brock and Hatred that actually works pretty well). All in all, there wasn't an episode in Season 4, Vol. 1 that I hated or anything, it just didn't quite have the same sparkle as previous Venture Bros. collections.

At least in terms of story. The Venture Bros.: Season 4, Vol. 1 looks as good, if not better, as it ever has. The animation is smooth and well drawn, with fantastic character designs. I used to hate watching cartoons when I was younger and seeing the art go off-model or noticing how a particular episode looked worse than another. If anything, the time taken on The Venture Bros. really pays off.

It should also be noted that this is all very adult humor, and at times requires a particular knowledge of obscure 1980s music and movies (I am guessing Hammer, Publick, and I are all around the same age, since we seem to have grown up with the same things). In particular, know that the DVDs of The Venture Bros.: Season 4, Vol. 1 are uncensored, and so language that was bleeped for broadcast is let loose here. Honestly, I like the shows better with the bleeps. I'm not a prude when it comes to language, I love creative cussing, but I don't know, somehow it's even funnier when you can't hear the f-bombs. Maybe it's the sense of it being taboo, or maybe it's like watching a horror movie, when the scare you can't see causes your imagination to run wild. It makes me think of Arrested Development; I've always been glad they never added the cursing back in, and I kind of wish they had left us with the option for the Venture Bros. on disc. 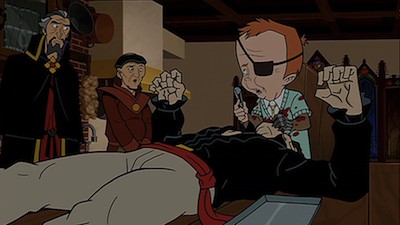 Video:
The Venture Bros.: Season 4, Vol. 1 set collects eight episodes on one DVD. The cartoon is presented in anamorphic widescreen, and the image quality is excellent. Colors are bright, and the resolution is very good. There is some slight pixilation at times, but I think the jagged lines are actually in the animation and not a fault of the discs.

Sound:
The original audio is mixed in 5.1, and it's actually a pretty decent mix. I didn't expect much, but there are some good inter speaker effects, and overall, the full audio experience sounds great.

Extras:
Being only one disc, Season 4, Vol. 1 has been released in a regular DVD case. It is housed inside an outer slipcover, which is designed to look like Rusty Venture's speed suit. So, naturally, when you pull the disc out, the interior cover is his bare chest. Yeah, you can say it: Ewwwww! A paper insert inside the case has Dr. Girlfriend's Modern Enemy Monthly cover on one side and a coupon for Venture Bros. merchandise on the other. 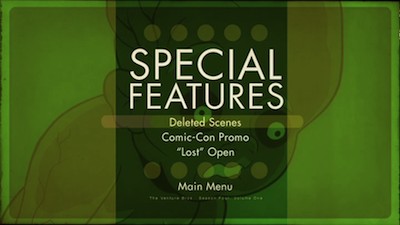 The bonus section is lead by audio commentaries on all eight episodes by Jackson Publick and Doc Hammer. They are fun, though they tend to meander and can be kind of too much in one go. At first it seems like they might have recorded one long, running commentary, but it turns out they recorded them out of order (as revealed on one of the middle episodes).

There are over 12-minutes of deleted scenes, though most of them are really short and were never animated. They are shown as storyboards cut into the clips they were trimmed out of. There is also a "'Lost'" open", one of the intro pieces that comes before each episode that was apparently discarded. (There is no explanation given.)

The last extra is the Comic-Con Promo, a long trailer shown at Comic Con prior to the premiere of Season 4.

FINAL THOUGHTS:
The Venture Bros.: Season 4, Vol. 1 is a bit of an oddity. It contains the first eight episodes of a season currently wrapping up, and the weaker eight episodes at that. The irreverent series is one of my favorites, so don't get me wrong, but this run of Venture Bros. seems to be lacking a certain something (namely, Brock Samson). It still is absolutely hysterical and has some of the best animation on TV right now, so it's still Recommended. There are plenty of great parodies on here, and also some character development worth checking out. Not as good as the past, but still pretty damn good. 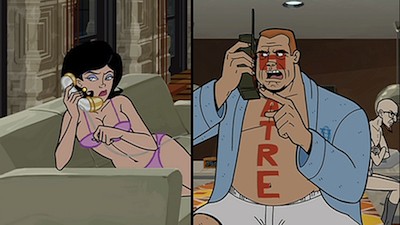