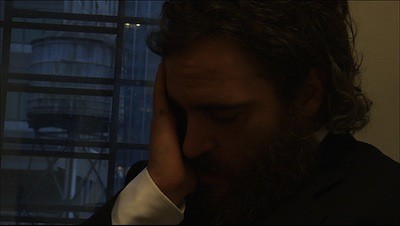 If I could, I'd forego having an opening paragraph to this review and just post a still of P. Diddy's face when he first gives Joaquin Phoenix's hip-hop CD a listen in I'm Still Here. It's one part "What the hell do I say?" and two parts "Oh, crap, is the crazy person still behind me?"

The whole I'm Still Here debacle got started two years ago when, in September 2008, the Oscar-nominated actor announced he was retiring from movies to pursue a rap music career under the moniker JP. Subsequent public appearances grew increasingly erratic, as the bloated, bearded star tried to battle rumors that the whole thing was a hoax by making everyone think he was legitimately out of his mind. The tabloid reports that this was a stunt started almost immediately, as supposed insiders spilled the alleged beans about why Phoenix's brother-in-law, Casey Affleck, was following him around filming everything. Naturally, the inevitable denials only fanned the flames. Whatever was going on, it reached pop-culture frenzy in early 2009. While promoting his "final" movie, Two Lovers, on Letterman, a rude and confused Phoenix left the host hanging, opening the treasure chest to Dave's comedy gold. To combat this, Phoenix got on a stage in a dance club in Miami, only to leap on a heckler after one song. Cue the sound of the heart machine going flatline.

I'm Still Here is the document of all the things that happened in between the public events, the private meltdown and personal turmoil that the would-be singer dealt with--including the rumors of it all being fake. Is Joaquin Phoenix really a tortured artist dying to break free, or is he a shrewd marketing man who found a way to pay for a very long vacation? To ignore this aspect of I'm Still Here would be kind of like reviewing a war movie and never brining up combat. Casey Affleck's film is either one of the best movie hoaxes of all time, or it's the worst case of cinematic enabling I've ever seen. Somewhere between Phoenix snorting coke off of a prostitute's naked breasts and vomiting in the bathroom in Miami, you'd hope someone would have said stop. Hell, sitting in the car with him and filming as he slammed into the rock wall on the edge of his own driveway should have at least caused someone to jump ship. 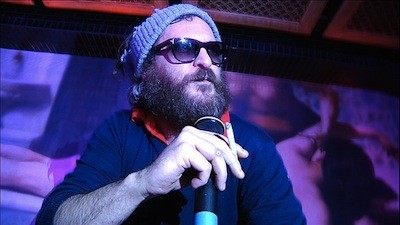 The debate over the veracity of this documentary will likely go on forever. I imagine even if everyone came out and declared it a put-on, there would still be folks who would think that admission was what's really fake. (Hell, some people still think The Blair Witch Project was real.) Those looking for signs of Affleck tipping his hand aren't going to find them. The closest we get is maybe at the beginning of the movie. Following a home movie of a very young Joaquin jumping off some rocks into a lake in South America, we see old news footage of the Phoenix children performing a song and dance number. Immediately after, Affleck shows a clip of Joaquin on a talk show promoting Walk the Line where he fibs about having any musical experience. Is this meant to stoke our suspicions? "He lied once, he could do it again."

And there are mockumentary-worthy moments throughout. There is a scene of Phoenix calling out the supposed rat that comes off like the actor reciting The Godfather from memory, with former Spacehog guitarist Antony Langdon standing in for Fredo. There is also a meeting between him and Ben Stiller where Phoenix accuses the comedian of acting too much like Ben Stiller, an accusation that only grows more ludicrous when Stiller denies it. The one most fans of the genre will seize on, however, is Phoenix trying to skip out on the Two Lovers premiere but not being able to find an exit. I wouldn't have been surprised if when he finally did get a door open, members of Spinal Tap or even Tim Robbins were waiting on the other side.

At the same time, the bulk of I'm Still Here is so manic and raw, if it isn't real, Joaquin Phoenix is a better actor than I thought. He is erratic, hostile, and frayed at the edges. There are uncomfortable scenes where he shouts at his assistants, who chase his every whim, like flying to Washington D.C. during Obama's inauguration hoping to run into Diddy, only for Phoenix to sleep through the whole ceremony. Not that he had an invite to any of the parties, anyway. In one hilariously sad tirade in the hotel, he fumes that Revolutionary Road got all the accolades that Reservation Road did not, as if it the critics and public simply took a wrong turn and missed his genius. It's one of the signs that for all his insistence that he does not care about other people's reactions, Phoenix really does crave the acceptance of the spotlight. As things go further downhill, he spends hours reading what people write about him on the internet and watching parodies of himself--and blaming everyone else around him.

When it's all said and done, when the questions of whether it's authentic or phony settle, the question becomes, is I'm Still Here a good movie. The answer: I think so. As I said at the start, I feel like Diddy in that I just don't know what to make of what has been given to me. As a treatise on the perils of ego and fame, I'm Still Here was riveting car-crash entertainment. It's career dismantling at its finest. What possible reason could Joaquin Phoenix have for doing this to himself? Was it his lifelong dream to be on film talking about smelling a hooker's butthole? Or is it really the cleansing he hoped for all along? Though the final scenes of him bathing in the same river he jumped in as a child are intended indicate a rebirth, the fact that they seemed staged bring the doubts floating back to the surface (followed, too, by end credits where participants are credited as playing other people, and the Miami hecklers are listed by name, fueling speculation that they were plants). So, then the question becomes, do I really care whether or not they are gaming me?

The answer is no. Pop culture, television, and viral videos have already redefined reality as a contstruct, so all that's left is to synthesize truth as fiction. Whatever was just done to me, I liked it. I doubt I ever want to go to this party again, but I was glad I was invited the first time. It may just the satisfaction of seeing other people screwing up, of peeking in on a crazy man and having a reassuring sigh that at least it's not me--but then, that's what artists do: go to the brink so we don't have to. What we walk away with after that is up to us. Mission accomplished?