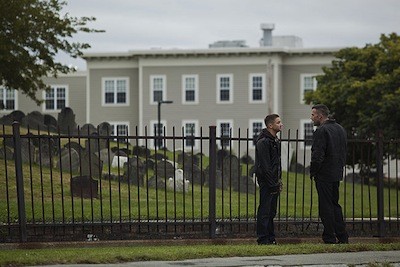 If Hollywood has the equivalent of a "Get Out of Jail Free" card, then Ben Affleck has definitely earned it. The actor was once the most overexposed face in movies, so much so that apparently even he got sick of seeing himself. Somewhere around 2006, Affleck snuck away, only to re-emerge in 2007 with the most unlikely surprise: he wrote and directed an adaptation of a tough Dennis Lehane novel. Gone Baby Gone was a real success, reminding us that once upon a time Ben Affleck had won an Oscar for co-writing Good Will Hunting. But Gone Baby Gone was a fluke, right? Affleck couldn't do it again, and he certainly couldn't up the ante by writing, directing, and starring, could he?

Why, yes, he could. The result is The Town, and, Ben, I will never doubt you again.

Mr. Triple Threat leads The Town as Doug MacRay, a tough customer from the Charlestown neighborhood in Boston. As a couple of title cards tell us at the beginning, Charlestown has produced more bank robbers than any other city in America, and the movie opens hard and fast with Doug leading a heist. He and his crew wear skeleton masks to take down a big score, but when a silent alarm is tripped, the loose cannon of the group, James Coughlin (Jeremy Renner, The Hurt Locker) decides to take the bank's manager hostage. Though they don't hurt her, Claire Keesey (Rebecca Hall, Vicky Cristina Barcelona) does have her world turned upside down by the abduction. Post-traumatic stress isn't really helped by the authorities suspecting that maybe she was in on the job.'

Things would be no better for Claire if she knew that the crooks are spooked when they find out she only lives four blocks away from their regular hangout. Doug decides to get close to her to see what Claire knows, and without really planning on it, he ends up dating her. A relationship develops, but one that makes Doug's partner's uneasy. They are feeling the heat. FBI agent Adam Frawley (Mad Men's Jon Hamm) is on their tail. Doug wants to take Claire and get out while the getting is good, but when crime is the family business in your neighborhood, getting out is not that easy. 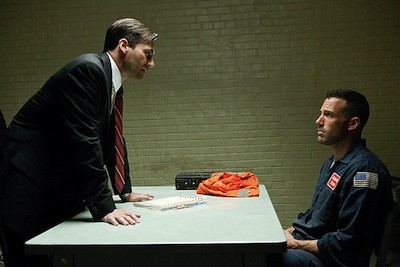 The Town is a film that has one of those trailers that makes people think they have seen the whole movie. Trust me, you haven't. Affleck and his writing partner, Aaron Stockard, working from a script by Peter Craig that was in turn based on a novel by Chuck Hogan, have put together one hell of a complicated movie. There are more than a few surprises in store, and also a fair number of subplots that add to the rich history Affleck is trying to create for these characters and this city. In addition to Renner, Hall, and Hamm, the cast also includes Blake Lively (Gossip Girl) as James' drug-addicted sister, Pete Postlethwaite (Clash of the Titans) as the local crime boss, and Chris Cooper (Adaptation) as Doug's jailbird dad. All of these characters are important to the overarching story, and all of them get their due. This is a tight-knit community, where past connections count for something. Everyone is circling down the same drain.

Amidst all of these interpersonal relationships, we also get a couple more robberies. There are three money jobs in all, each with their own complications. The action is staged smartly, letting us see how the scheme works and not short-changing the audience to make something slick and gimmicky. The Town is paced like a Michael Mann film, and dare I say, is actually more satisfying than anything Mann has made since The Insider. Affleck and master cinematographer Robert Elswit--who regularly shoots Paul Thomas Anderson movies and George Clooney vehicles--have the same love of a beautiful image, but they trade Mann's neon for the grime of real streets. They also drop some of the self-conscious virtuosity; Elswit's camera moves with purpose. Even when there is a spectacular shot, it's never beyond what the story calls for.

The more important difference between Affleck and Mann, however, is those previously mentioned characters. Maybe it's the fact that Affleck is also an actor, but he seems hellbent on giving all of his performers something interesting to do rather than just posing them like expensive toys. They pay him back with excellent work. Renner is a convincing violent scumbag, while Hamm plays his federal agent with hardboiled confidence and just a hint of sleaze. Even Blake Lively manages to create something interesting by exploring the darker side of her TV persona. Only Pete Postlethwaite overdoes it; that guy has turned into a chronic ham. 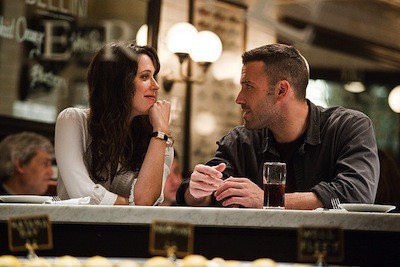 The core of The Town are Hall and Affleck, however, and their onscreen romance is one of the more convincing cinematic courtships in recent memory. Their date conversations are understated and honest, and it's nice to see a movie relationship where the characters actually take the time to get to know each other. The pair have good chemistry, with Affleck playing the quiet rock that she can lean her troubled emotions against. Though The Town very nearly slips too far into melodrama a couple of times, it's surprisingly never in the love story. Restrained emotions are safer. Doug is trying to maintain calm, a counterbalance to James' angry outbursts. Both have identified the endless treadmill that their city's most honored profession has put them on, but how both keep up the pace are two very different things.

The Town is deftly plotted. It's a crime movie that expects its audience to pay attention. Affleck plants things throughout the movie that end up having significance later on. It's like a line he gives to Chris Cooper and then later repeats himself (and I'm paraphrasing)--"I'll see you again, and if not on this side, then on the other." There are lots of little touches in the writing that come back again, flipped on their face, taking on added meaning. There is a bit of a cat and mouse game between the cops and the crooks, as well as the tug of war between criminal comrades. There is violence, but it is not glamorous, and it comes with consequences. Every action has a reaction. On this side or on the other.

Just as Ben Affleck deciding to step out of the spotlight had the positive consequence of a his career taking on a whole new dimension. The Town is a smart and assured as anything you're going to see this year. Who knew that the toothy star of so many Michael Bay movies would one day be a granite-jawed leading man in films of his own design? The guy is now two for two, and I can't wait to see what he's planning next.