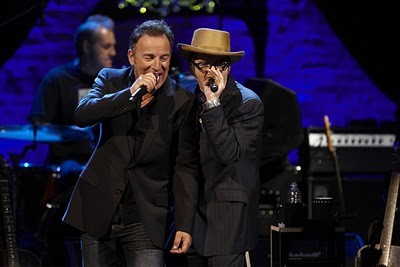 Sometimes more of the same is a good thing. Such is the case with Spectacle, the Elvis Costello television show pairing one of rock 'n' roll's greatest living artists with other musicians that he admires. Once they take the stage together, they engage in conversation, swapping stories and then swapping songs. This isn't a program where they talk about Bruce Springsteen's big hits and then cut to an ancient clip of him performing "Born to Run" once upon a time. Instead, when Elvis and Bruce speak of their mutual love of Sam and Dave, they follow with a performance of "I Can't Stand Up For Falling Down."

Spectacle: Elvis Costello with... - Season 2 is a two disc collection with seven episodes, each clocking in just under 50 minutes. Though the program follows its own formula--Elvis' intro, discussion, songs, closing number, etc.--the make-up of the guests is malleable. In bookend episodes, the season opens with focused programs, each dealing with one band/artist. In the premiere, it's Bono and the Edge from U2; in the two-part finale, it's Bruce Springsteen. Both episodes are incredible. Costello gets his peers to open up and share their inspiration and insight. Springsteen has a reputation for being a bitter of a marble-mouthed mumbler, but in this setting, he is loquacious and friendly, laughing and teasing Elvis and sharing his enthusiasm for all things musical. Likewise, Bono and the Edge are surprisingly candid and self-deprecating. Despite not being much of a U2 fan, and as someone who usually finds Bono insufferable, I've now watched the U2 Spectacle twice and loved it. (It helps that they perform a couple of U2 songs I actually dig: "Stay (Faraway So Close)" and their Sinatra number "Two Shots of Happy, One Shot of Sad.")

Other episodes open the field up a little bit. The second installment is what they call a "guitar pull": four singers known for their guitar work join Elvis to chat and swap turns at the microphone, with all of the players chiming in on each other's songs. Costello puts together a group that covers various generations; there is Neko Case, a more recent start sitting next to 1990s figures Sheryl Crow and Ron Sexmith, flanked by late '60s troubadour Jesse Winchester. The episode has many highlights, including a closing group performance of Bob Dylan's "Ring the Bells," but the real stand-outs for me were Case's rendition of her own tune "Prison Girls" and Sexmith and Costello pairing on a tender rendition of "Everyday I Write the Book."

Episode 3 offers another variation on this. In honor of the ailing drummer Levon Helm, Elvis decides to build a new version of the influential Band with Helm as its center. Joining him are Richard Thompson on guitar, Nick Lowe on bass, and Allen Toussaint on keys. The host brings them up one by one, chats with them, has them sing a signature tune (Nick Lowe's "The Beast in Me" is a stunner) before having them all jam together, ending with a huge version of the Band's "The Weight," complete with the addition of Ray LaMontagne for a verse. LaMontagne is also in episode 5, the third of a trio of linked segments showing three generations of storytellers from the American south--John Prine and Lyle Lovett are the other two.

At the center of Spectacle: Elvis Costello with... - Season 2 is a stand-alone episode where the tables turn and Costello becomes the interviewee. Actress Mary-Louise Parker, an admirer of Costello's and also an occasional music writer, takes over hosting duties, digging into Elvis' past and examining his development. It turns out pretty well, though one could make the argument that Costello exposes himself more when talking to other people than he does talking about himself. His questions and reactions reveal who he is and how he thinks in ways maybe he doesn't even realize.

So, yeah, Spectacle ain't broke, so I'm glad they didn't fix it. If I had one complaint, it's that there's not enough here. We got six episodes less this season than we did in Season 1. Also, not the same level of variety. (Last time, we had an opera singer and a former U.S. President. Come on!) There's so much music out there. Give me more of this! I neeeeeed it. 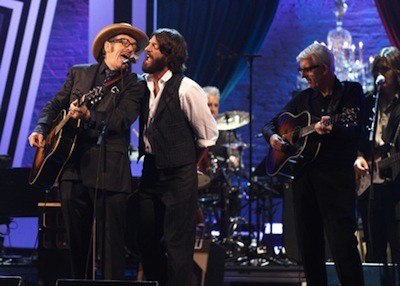 Video:
The widescreen transfers on the episodes look amazing in high definition. The performances look sharp, with good overall detail and a sense of the depth of the stage. In some cases, the image quality is almost too good. The image is so clear, you can see how heavy the performers' make-up is, including where the foundation color stops and where their real skin begins. (Edge, Sheryl Crow, I'm talking about you.)

Sound:
Two sound options are offered: a 2.0 mix and a 5.1 mix. The latter is easily the better choice. The volume is stronger, and the overall feel is warmer and more indicative of the live atmosphere. It works the speakers to push the audience noise to the back and the sides, creating a richer simulation of what it must have been like to be in the theatre.

Closed Captioning for the deaf and hearing impaired is available for those who require it.

Extras:
Spectacle: Elvis Costello with... - Season 2 spreads its 7 episodes across 2 discs, and they come in a fairly standard-sized Blu-Ray case with a raised interior tray. There is also an interior booklet giving an episode guide, complete with guests and songs performed. There package has a shiny outer slipcase with the same artwork as the cover underneath.

Disc 2 has the bonus features for the season, including a 42-minute behind-the-scenes documentary, "Inside Notes," hosted by David Furnish. The presentation is fairly standard, but it's extensive, giving background on Costello and also on the two theatres where the program is taped, the Apollo in New York and the Masonic Temple in Toronto. Crew members are interviewed, as well as folks like Elton John, Mary-Louise Parker, and author Malcolm Gladwell, and the program focuses on the recording of two episodes from this season: the guitar pull and the U2 show.

There are three extra songs included. Elvis and his band, the Imposters, do a fiery run through Elvis' own "I Want You" and also cover U2's "Dirty Day." Bono and the Edge join Elvis to cover his seminal hit "Alison." That one might have been better left on the cutting room floor. Bono whiffs it pretty hard. His voice sounds terrible when he tries to sing the verses as tender and quiet.

FINAL THOUGHTS:
Highly Recommended. Spectacle: Elvis Costello with... - Season 2 offers seven more episodes of the accomplished musician's TV talk show, where he sits down with other performers, discusses music, and plays some songs. It doesn't matter if you are a fan of the subjects--though with guests including Bruce Springsteen, U2, Lyle Lovett, Neko Case, Sheryl Crow, and more, you likely will like someone on the roster--you just have to like music and hearing artists discuss their craft in meaningful ways.