After the initial trepidation followed by the overwhelming box office success of the first Iron Man film, a second was a foregone conclusion. However as part of a larger trilogy, not to mention a subsequent Avengers film, the challenge of advancing some of those storylines along with giving people what they liked in the first one would be difficult, to say the least.

Jon Favreau returns to direct the second film, based on Justin Theroux's (Tropic Thunder) screenplay. Tony Stark (Robert Downey Jr., Sherlock Holmes) and his businesses continue to thrive, in part because as Iron Man, he's promoted the longest stretch of global peace in quite some time. There is a small cottage industry that tries to capitalize on Stark's success, with the main one being Justin Hammer (Sam Rockwell, Moon). Hammer tries to mimic Stark's technology and gain an advantage over it, but the results seem to wind up being disastrous. It's as if he's the Wile E. Coyote of defense contractors who want to make their own Iron Men. However the biggest threat to Stark's Iron Man may be Ivan Vanko (Mickey Rourke, The Wrestler), a Russian whose father worked with Stark's, and may be as familiar with the technology of Iron Man as Tony is. 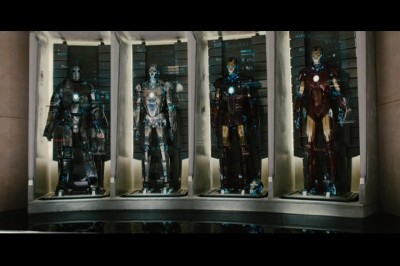 Not knowing of Vanko, Tony continues to live the good life. He continues to get along well with his assistant Pepper (Gwyneth Paltrow, Se7en), despite the addition of the younger and equally attractive Natalie (Scarlett Johansson, He's Just Not That Into You) into the fold. Despite these women sparring for Tony's affections, he has bigger things to be concerned about. The arc reactor device in Tony's chest is slowly turning his blood toxic and in effect, killing him. He doesn't tell the women, or his best friend Lt. Col. Rhoades (Don Cheadle, replacing Terrence Howard from the first film). And when Vanko confronts Tony, in Monaco of all places, it leaves Tony with a sense of doubt and a lack of purpose that might have long-lasting ramifications.

While the story makes for potentially interesting viewing, it seems to lack the sense of exploration and newfound epiphany that the first Iron Man film had. Gone are Tony's attempts to make a good suit, and in its place is our hero dealing with whether or not he wants to continue with his alter ego while dealing with his mortality. Stark's personality might have undergone a transformation since the first film, but this sequel, he seems very Superman II about things. In fact, the story is eerily similar to that, right now to the presence of the protagonist's father at the end of the second act. In this case, Tony's father in played in faux 16mm film by John Slattery (Mad Men).

With Favreau juggling the different storytelling balls, including an increased role from Nick Fury (Samuel L. Jackson, Soul Men) and the possible formation of S.H.I.E.L.D., he gives the audience new and different ways to enjoy the action and fighting sequences. And I have to admit, they're exciting and damned fun to watch, starting from the opening sequence when Tony jumps out of a military plane into his "Stark Expo" highlighting his company's ware. He twists and turns through the night sky, avoiding fireworks and other air obstacles to make his grand entrance. The confrontation with Vanko is also entertaining and keeps you on the edge of your seat. 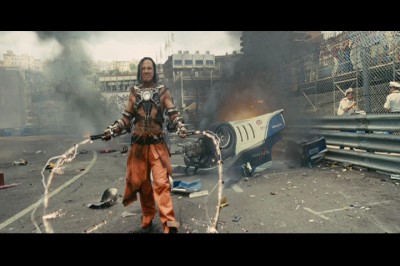 From a performance point of view, they aren't bad, though the Downey-Paltrow dynamic seemed to be a little too smug with itself at times. It went from being fun and flirtatious in the first film to annoying in the second. On his own, Downey could have used some more screen time to flush out the internal dilemma about death vs. duty as Iron Man, which was promising but ultimately ignored. While Cheadle's addition to the cast brings a little more gravitas to the film, he feels underused in the role, and oddly enough lacks the swagger in the War Machine suit he inhabits later. It's almost like Howard would have made a better Rhoades in this film, and Cheadle would have been nice to see in the first one. The best performance in the film is Rockwell's. Justin Hammer tries to borrow Tony Stark's swagger, and that's about the only thing he can do that's remotely as good. His weaponry, technology and innovations are wholly inept, yet he continues to press on. He's a human interpretation of a pilot fish, like Ned Beatty in the Superman films minus the gut.

Yet with all the performances, pyrotechnics and really cool effects, the film can't seem to overcome this overwhelming feeling of transition that comes with being part two of a trilogy, not counting the Avengers production. It's ambitious in what it wants to accomplish, however this feels like a failed attempt at it. There are a few superhero sequels that have done worse, but more have succeeded at it at a higher degree than Iron Man 2 does here.


Presented in 2:35:1 high-definition widescreen using the AVC codec, what I've liked about both Iron Man films is how practical the fight/flying/shooting looks when you watch them. That said, there's a bit more noticeable computer animation in this film than in the first (the Monaco race coming to mind), but the film looks excellent on Blu-ray nonetheless. Blacks are deep and provide an outstanding contrast, whites aren't overblown and flesh tones are reproduced accurately. The source material looks great and there's little in the way of DNR, while reminding you periodically that there's a fine layer of film grain present when you watch. It looks exquisite. As a note, the screenshots are not reflective of the disc's quality when you watch it.


Paramount gives Iron Man 2 a DTS-HD Master Audio 5.1 lossless track and the results are amazing. The opening sequence (which I outlined earlier) sounds powerful both in the low end when the jet thrusters engage and in the clarity of the fireworks going off. Gunfire sounds just as clear when it's whizzing by and around you in the third act sequence where Iron Man and War Machine fight the drones, and the end sequence when War Machine leaves, you feel the takeoff in your chest with a near-concussion feel like the liftoffs in the first film. In quieter sequences, dialogue is consistent in the center channel and remains balanced throughout, and the feature handles heavy metal music, low-end fidelity and surround activity equally well. Considering some of the other high-definition that's been released, Iron Man 2 is another top notch demo disc for your audio setup.


Paramount gives you three discs in this package; the first discs includes the Blu-ray and some supplements, the second disc includes the remainder of the extras and a third disc has a standard-definition copy of the film and a downloadable digital copy for your portable device of choice.

The first disc has a commentary with Favreau that proves to be entertaining and informative. He's a longtime DVD-friendly presence in the industry, providing a wealth of anecdotal and/or detailed information, and this track is no different. He covers alternate and deleted footage, the intent in story and look from the first film, and various shot ideas and looks that they wanted to convey in the picture. He recalls casting ideas and even brings in a thoughtful memory or two on a particular cast or crewmember. He's a very active commentary participant and if you're a fan of the film, it's worth giving it a listen. The S.H.I.E.L.D. Data Vault has a host of previsualization footage, animatics, stills breakdowns and other information that you can play as an overlapping subtitle feature or on its own. The tie-ins to other Avengers in this area is particularly thoughtful.

The second disc is where the boys make their money, as "Ultimate Iron Man" is a four-part look at the production that you can play separate pieces of, or play the whole thing which runs about 90 minutes. "Rebuilding the Suit" looks at what Favreau and the cast liked about the first film and what they wanted to do in the second, and the piece includes a lot of video introductions from Favreau on a particular location or part of the production, be it principal photography or in post-production. Design ideas and more previsualization footage, and the work that Favreau does with the crew is given some time. Rourke and Cheadle chime in with their individual opinions on working in the costumes, and Johansson discusses working on the fight sequences and wire work. The second piece, "A Return to Action," shows us what life was like on the shoot, and the comedic ad libbing between Downey, Rockwell and Garry Shandling, who cameos as a United States Senator in the film. The cast also talks about how Favreau works with them and what he wanted to get out of them, and the Defense Department even chimes in to talk about their role in the film. There are even some outtakes in this segment if you hang in there long enough. 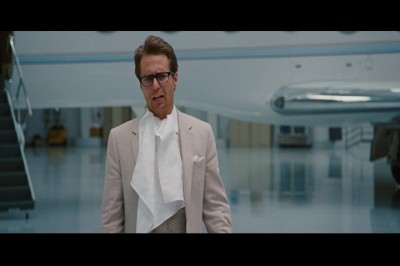 The third piece ("Expanding the Universe") shows the challenges and opportunities in upgrading the weaponry and gadgets from the first film, while the Monaco shoot is covered in more detail. Look for a comedic appearance here, along with a better than expected Christopher Walken impersonation from Rockwell. "Building a Legacy" is centered around the post-production, including visual effects, composition and editing of the film. The voiceover sessions with Jarvis (Paul Bettany) are shown, and Rage Against the Machine guitarist Tom Morello shows us his musical contribution to the movie, and the segment wraps with some final thoughts from the cast and crew. All in all, Brad Baruh, the segment's producer, earns some much-deserved praise for this piece.

But it doesn't complete the set. Six featurettes are up next. "Creating Stark Expo" (6:44) shows us the time, thought process and difficulties in pulling the location for the opening and closing scenes together, while "Practical Meets Digital" (8:37) looks at the process in getting the shots to look as good as they do. Three origin summations for Nick Fury (6:07), Black Widow (3:06) and War Machine (3:52) are next, and concluding with a tribute piece to Adam Goldstein, a DJ who had a bit part in the film (2:02). Eight deleted and extended scenes follow with optional commentary (16:50). There's been some recent talk about the alternate opening and while it's inclusion would have been nice, I'm fine with how Favreau went with the final cut. Stills galleries are next along with three trailers to this film and three for Marvel products (read: two Iron Man 2 video game trailers and an Avengers animated feature), and a music video for AC/DC's "Shoot to Thrill," which opens the film, completes things (5:37).


Iron Man 2 might not be as good as its predecessor, but it's definitely a "good but not great" film, with a cautious eye towards how the Avengers fleshes things out. Technically, it's an absolute stunner and from a bonus perspective is as complete as you're going to get, so I'd buy it without reservation.