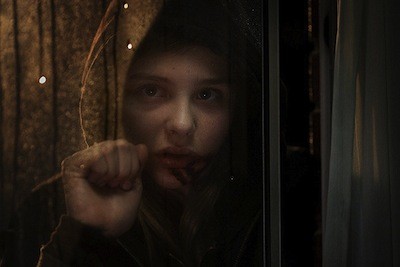 In 1963, Jerry Lewis made a movie called The Nutty Professor. He played a nerdy scientist named Julius Kelp who was a flop with ladies, a clumsy doofus who meant well but couldn't get it right. So, Julius created a potion that turned him into smooth casanova Buddy Love. It was a concept that worked so well that Eddie Murphy later remade the movie and pretty much stuck to the formula. Let it never be said that Hollywood doesn't get it right occasionally.

Because let's face it, they get it wrong a lot. Like with Let Me In, where they've flipped the formula the wrong way around. In terms of vampire lore, the 2008 Swedish film Let the Right One In is the suave ladykiller with all the right moves, and the producers have dumbed it down into something clumsy and obvious. Even the title is far less evocative. Let Me In. It just begs to be mangled into a goofy headline. "Let Me In? More like Let Me Out!"

Let Me In is a creepy period piece based on a film by Tomas Alfredson, which was itself based on a novel by John Ajvide Lindqvist, who also wrote the original screenplay. Let the Right One In features a young boy who meets a weird girl in Sweden in the early 1980s. The new version keeps the date (1983) but changes the location to the American South. There, 12-year-old Owen (Kodi Smit-McPhee, The Road) contends with crippling loneliness brought on by his parents' divorce and constant bullying at school. He lives alone with his mother (Cara Buono), and he self-medicates with candy. At first, when new neighbors move into the apartment next door, he doesn't think much will change. The girl, Abby (Chloë Grace Moretz, Kick-Ass), is the same age as him, but when they meet on a snowy jungle gym in the building courtyard, she quickly rejects him. Who cares? She has dirty bare feet and smells bad. Nyah!

Except Owen does care, and after a couple of nights of tentative conversation, he and Abby do become friends. She encourages him to come out of his shell and to stand up to his tormentors, he encourages her to get out and have fun. Except fun isn't really in the cards for Abby--she has a terrible secret. Abby is a vampire, and the recent spate of murders in town are her handler (Richard Jenkins) harvesting blood to keep her alive. Things are going to go horribly wrong very quickly, that's the nature of this kind of horror show. The question is, can this new friendship survive it? And is evil just something you are, or something you do? 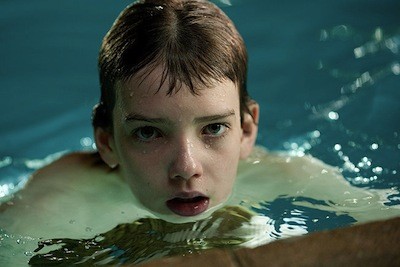 It's a pretty good story...or at least it was the first time around. It's not that Let Me In is bad, it's just that it never gets close to measuring up to its source. The movie was written and directed by Matt Reeves, who actually does a better job with the more complicated material than he did with the dopey Cloverfield. He creates a frosty atmosphere of dread, which is exactly what Let Me In/Let the Right One In requires. Maybe had I not seen Let the Right One In--or maybe if I had caught them the other way around; some who see Let Me In first may prefer it the way some of us prefer Vanilla Sky to Open Your Eyes--then this production wouldn't seem so pointless. I am not against remakes, but it's up to the folks behind them to make me forget that there was anything that came before, there is no face value.

Rumors had previously suggested that Let Me In would start over with Lindqvist's lengthy novel and tease an entirely different story out of it. I've read the book, and there was certainly plenty left behind when Lindqvist wrote his screenplay. Unfortunately, Reeves hasn't really ferreted out anything new; on the contrary, there is actually less plot in Let Me In than in the Alfredson version. All the subplots about the community where Owen lives are dropped, meaning that Abby's victims are nameless caricatures rather than people we care about. Likewise, Owen's parents are nonexistent. His father is a voice on the phone, and Reeves contrives to never show us his mother's face, it's always blocked or off screen. This could have been interesting had he decided to do that with all of the adults, made this like a horror movie version of Peanuts where grown-ups never condescend to the children's level, but instead, it lessens our understanding of Owen's pain. Abby is also much less of an ambiguous character, and Reeves abandons one very important detail about who she is. I guess they thought American morality couldn't take it.

Let the Right One In's chills were a result of reduction. The less said, the less seen, the more response it evoked. Reeves goes the other way, and he turn everything up just a little. More blood, more icky sound effects, more direct violence. The result isn't an increased level of fright, but rather, Let Me In ends up being more generic, more of the same ol' horror thing, right down to the booga-booga choral music that reminds us that there is dark mysticism afoot. The underlying question of whether Abby is good or bad is now framed in the white hat/black hat obviousness of the Reagan era. Pain and confusion are replaced by easy answers. The unseen is now seen--and for everyone who complained about the horrible computer-generated cats in Let the Right One, you'll be wishing for a few digital felines after you peep the rubbery vamp effects here. The one thing Reeves should have had the budget to get right, and he flubs it.

In all fairness, there are some good things about Let Me In. Kodi Smit-McPhee is surprisingly effective as Owen. Though he played a similar whiny character in The Road, he's actually far less annoying this time around. He connects well with Chloë Moretz, who is underwhelming as Abby. The young actress brings no mystery to the role. There are also some good shocks, and one pretty remarkable car crash sequence near the halfway point. It's about there that Let Me In begins to improve, and some of the iciness starts to pay off. Sure, the best scenes are pretty much direct lifts from Alfredson's movie--the climax at the pool is almost shot-for-shot the same--but at least Reeves recognized some of it tweren't broke and didn't try to fix it.

Still, none of that good stuff erases the lingering befuddlement I felt. There was no getting around the fact that Let Me In didn't need to exist. Going back to the jokey headlines, viewing this version of the story would definitely be letting the wrong one in. Buddy Love already swept me off my feet, and there's no reason at all I should have ever gone with his dorky little brother, much less invited him over for soda and popcorn. Stay home and rent Let the Right One In instead. 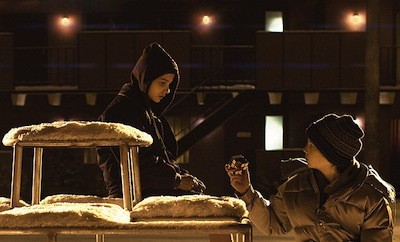