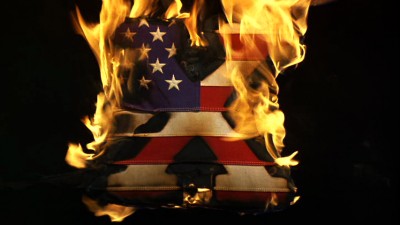 Please Note: The screen captures used here are taken from the 2005 DVD, not the Blu-ray edition under review.

I can clearly recall the baseball cap-centered hype surrounding the 1992 release of Spike Lee's Malcolm X. At that moment, one couldn't look anywhere without seeing the ingeniously-branded single-letter "X" symbol, and Lee even talked Madonna into altering the title of her concurrently buzzed-about naughty picture book to Sex so that neither of the two zeitgeist-seekers would impinge upon the other's thunder. Now, years after the moment faded and the hubbub died down, only the film remains; Lee's instinct for publicity creation aside, was the film, looking back, worth all his smart marketing and well-publicized fundraising? Lee, easily the most prominent African-American filmmaker (out of a shamefully small pool of candidates for the title)--and one who had nimbly used a dialectical back-and-forth between the militant thought of Malcolm X and the pacifist teachings of Dr. Martin Luther King, Jr. as the foundation for his 1989 breakout, Do the Right Thing--seemed the perfect teller for this particular story, possessed as he was of the knowledge, passion, and artistry to do it justice. But cinematically dramatizing the life story and political struggles of such a complex, important figure, a hero to the filmmaker and innumerable others, would be a daunting, perhaps impossible task for anyone (I for one wouldn't know how to begin trying to do a movie life-of-Malcolm-X in the "right" way), and the film Lee came up with, try as it might and as interesting, engaging, and inspired as it frequently is, ultimately falls somewhat short of the Malcolm-level greatness to which it aspires. 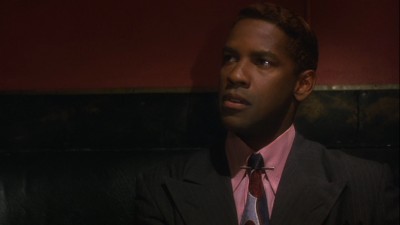 Lee starts off on the right foot, with a literally inflammatory opening-credit sequence (Malcolm X orating one of his most accusatory "anti-white" speeches over a montage of the then-very-loaded video footage of the Rodney King beating and an American flag burning its way down into a red, white, and blue "X") followed by a virtuoso long traveling shot introducing us to the zoot-suited, hot-jazz-inflected Boston of the mid-1940s. This is the big city to which poor country boy Malcolm Little (later X, played by Denzel Washington in a captivating, multifaceted performance) has come to transform himself, at the barber's and at the tailor's, into a flashy, slick ladykiller and bold, savvy gangster. 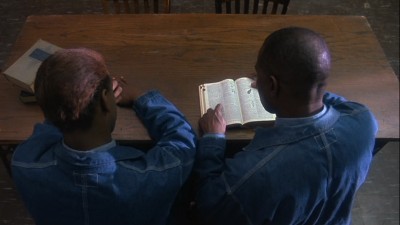 That initial burst of energy slowly dissipates as the film gets down to the business of relating Malcolm Little's childhood (during which his father was murdered, his house burned down, his mother driven mad, and his family destroyed by the white power structure, whose treatment of Malcolm, ranging from insensitive to horrendously vicious and violent, render his later vehemence more than understandable); his prosperous but reckless dealings in gangland leading to eventual imprisonment and behind-bars conversion to Islam accompanied by abandonment of his slave name for "X"; and his rise to prominence, power, influence, and notoriety through the Nation of Islam (at that point the only militant, organized black-power front available). Lee, working from his script (based on Malcolm X and Alex Haley's Autobiography of Malcolm X and originally drafted by Arnold Perl, director of the 1972 documentary Malcolm X), makes a valiant attempt to sidestep a dull, dutiful-timeline biopic approach through some neat temporal tricks (a Goodfellas-like freeze-frame/cut into voice-over-narrated flashback, etc.), and his cinematic sprightliness on the technical front is in full force here. But this story leaves his plate too full, and there is finally no escaping the obligation to hit, systematically and predictably, upon all the important biographical events: Malcolm's rise as a black leader beyond the Nation of Islam, the internecine struggles within that increasingly corrupt and hypocritical organization that led its most recognizable member to dissociate himself from it; the escalating physical danger from both his former Nation of Islam colleagues and the American powers-that-be; his pilgrimage to Mecca and resultant conversion to united struggle against racism as opposed to his prior racial separatism; and, of course, his tragic assassination on February 21, 1965--the culmination of a progressively more brazen death-threat campaign against Malcolm and his family mounted by the Nation of Islam at the behest of who knows what influences. 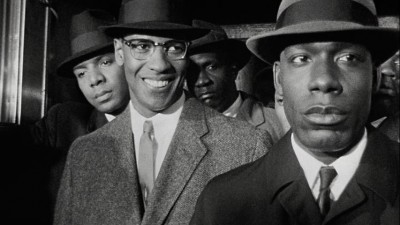 In addition to having to cover all those bases--the big, iconic, famous moments--Lee also wants to flesh out a more intimate picture of Malcolm X as an individual, depicting his friendships, romances, courtship/marriage, and family life on more personal terms. But these sections tend to come off as more subdued, tentative, and speculative than the markedly more forceful sequences capturing the speeches and other markers of Malcolm X the Leader and Public Figure. Despite its array of arresting visual fluorishes, the restlessness in its editing and camera movement, and the swelling bombast of its music, the film is hobbled by this disjunction at its core. It feels as though Lee never decided on just what kind of film Malcolm X was going to be, what its most effective scope was, and so he tries to have it every which way and ends up with something that vacillates, lurches from key to key, and fails to cohere as satisfyingly as it should. Its three-and-a-half-hour running time is not sufficient for that vast an ambition; a narrower focus/shorter film, or alternately an even longer version to properly encompass all the facets of life that Lee takes on, would probably have worked better than the too often overly brisk, sometimes oddly detached film as it is, which fails to completely escape the biopic/docudrama trap, Lee's best efforts notwithstanding. 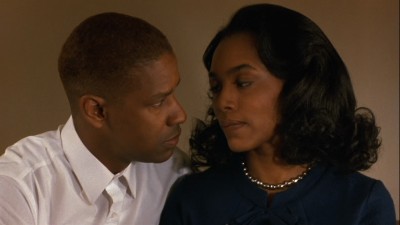 That is to say that Malcolm X is an uneven film, but not at all to imply that it isn't a good, worthy effort. During those stretches where it does click, Lee's ingenuity and that of his collaborators (especially cinematographer Ernest Dickerson's beautiful way of capturing light and color), along with the impressive commitment and engagement of the cast (particularly Washington and Angela Bassett as Malcolm X's wife, Betty Shabazz, as well as Albert Hall as Baines, Malcolm's savior-cum-nemesis), are riveting and look like greatness. The most likely explanation for the ways in which the film doesn't quite make it is the prohibitive magnitude of its subject; perhaps any film attempting to bring to the screen what Malcolm X and Alex Haley brought to The Autobiography of Malcolm X is destined to fall short, and the most any Malcolm X movie could be is an introduction, not a "full" treatment. On those terms, Lee's Malcolm X, despite being less than the sum of its parts, has enough parts that do seem to offer a glimpse of that impossible complete picture Lee is striving for and cannot quite attain that it remains both a salient point in Lee's intriguing, uneven filmography and a laudable tribute (if not anything close to the definitive monument) to one of the most important figures of the 20th century. Warners is releasing this Blu-ray edition just in time for February's Black History Month, and one could do worse than to acknowledge the African-American struggle by taking in Malcolm X as an always-relevant, invigorating, and informative introduction to or reminder of one of its greatest activists. 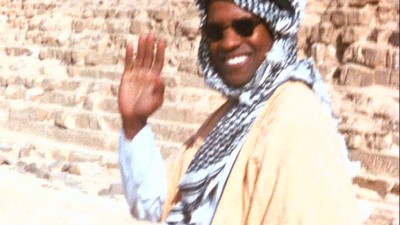 
The transfer is a nice-looking one overall, particularly on the color/skin tone front, putting on proper display most if not all of the finer characteristics and subtleties of lighting and color palette in Ernest Dickerson's always vividly colorful and often gorgeous cinematography. There are a couple of issues, the more minor of which are the occasional but noticeable aliasing and noise reduction disrupting what is generally a nicely textured, film-like appearance. The bigger issue, at least for this reviewer, is an unaddressed holdover from the DVD version of the film: a slight deviation from the theatrical aspect ratio of 1.85:1 down to 1.78:1. At least the DVD edition was honest in describing the aspect ratio as "matted widescreen," but inadvertently or not, the Blu-ray's packaging misleads by claiming 1.85:1. This is not hugely noticeable and does not appear to alter the look of the film in any noticeable way, but it is information any Blu-ray buyer will want to be aware of.


The film's DTS-HD 5.1 Master Audio soundtrack is bold, vivid, and clear, filling the room resonantly and dynamically with Terence Blanchard's score and Skip Lievsay's sound design, with no audible distortions or imbalances.


--An accompanying DVD contains the Oscar-nominated 1972 Arnold Perl documentary (Perl wrote the original script adapted by Lee for his film) Malcolm X, which is a huge gift to the viewer--from the opening, heart-wrenching strains of Billie Holiday singing "Strange Fruit" over a black screen to James Earl Jones's powerful narration (of Malcolm's words, taken from Alex Haley's book) to the final reiteration of the "by any means necessary" speech, it's a riveting, fine, exhilarating film--but something of a disservice to Lee's feature, some of whose dramatizations and stylizations look lame compared to the real-life footage of the man and his embattled, defiant community on display here. Lee's Malcolm X is a good film, but this documentary is the real essential viewing of the package.

--A feature-length audio commentary with Lee, cinematographer Ernest Dickerson, editor Barry Alexander Brown, and costume designer Ruth Carter, with all of the articulate, energetic, and opinionated voices apparently recorded separately yet very well tied together for an ongoing, multilayered description, exploration, and analysis of the thinking behind and process of the film's multiple dimensions--thematic, visual, and musical. The feel of both the passion and the exhaustion (as well as the skill and indefatigability) of all the collaborators is palpable here.

--"By Any Means Necessary: The Making of Malcolm X," a 25-minute, unusually candid retrospective making-of featurette, tells the story of the film's long, somewhat contentious making (Lee successfully campaigning to replace initial director Norman Jewison, fights over the film's length and budget, etc.), with narration by James Earl Jones and some unexpectedly detailed, in-depth behind the scenes making-of footage and discussion. There are numerous interviews with crew, producers, and Lee himself, and even interjections from Martin Scorsese, a champion of the film (he placed it among his top 10 of the '90s rankings), who invokes The Red Shoes in describing Lee's all-consuming artistic dedication to the project.

--Twenty-five minutes of deleted scenes, each with an introduction by Lee, are not only fun and gratifying to watch, but many of them would actually have fleshed out the film in a way that might have dulled some of its too-abrupt, truncating transitions and leaps. Lee's introductions/reminiscences are heartfelt and revealing, nearly as interesting as the clips themselves. And even Clint Eastwood would catch the (jungle?) fever from the enthusiasm for the DVD/Blu-ray format that Lee expresses on behalf of directors and film students everywhere.

--The film's original theatrical trailer (narrated, once again, by the venerable James Earl Jones; is there anything this man's voice couldn't convince us of?).

--This Blu-ray edition is packaged as a "digibook" with an enclosed souvenir program-like booklet featuring an essay on the film, actor/director bios, a Malcolm X timeline, trivia related to the film, and many beautifully reproduced photos. 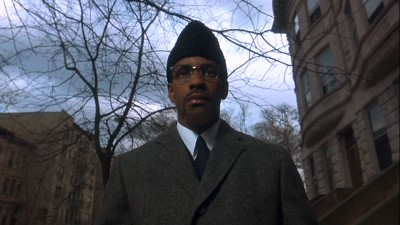 
Spike Lee's Malcolm X is uneven--neither the David Lean-type epic nor the up-close-and-personal revelation of a complicated, fascinating, and vital individual human being that Lee and co. have clearly taken pains to achieve. But though it does fall short of greatness, it is replete with admirable and stunning passages between the more conventional ones, and it also works quite well as an insightful introduction to the evolution of Malcolm X's thought. (If only Lee had forgone the biopic elements and made a movie just focused on the great man's life vis-à-vis his political attitudes and theories!). The film is easily worth watching and rewatching despite its drawbacks (and its length is not a problem; whatever its other problems, it is absorbing throughout). Even after taking its flirting-with-mediocrity passages into a account, the balance is in its favor, and it can be wholeheartedly Recommended.