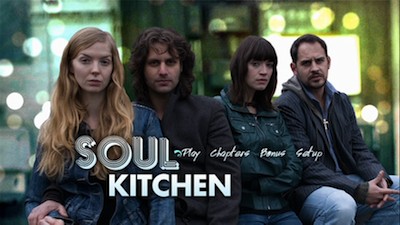 Zinos Kazantsakis is the son of Greek immigrants living in Germany. He is the sole proprietor of a rundown restaurant. Soul Kitchen is set-up in an out of the way spot, in a warehouse-like space, and if not for its neighborhood regulars and the dedication of its skeletal crew, it wouldn't have lasted as long as it has. Zinos isn't much of a chef, his menu is made up entirely of frozen food he buys at the supermarket. He'd like to feed the souls of his patrons with culinary delights the way his favorite music enriches the listener, but it's just not in the cards for him.

Soul Kitchen is the latest movie from German director Fatih Akin. Known primarily for his visceral dramas Head-On and The Edge of Heaven, the filmmaker takes an unexpected turn into broad humor here. Co-written with lead actor Adam Bousdoukos, Soul Kitchen serves up an odd combination of laughs, striving at times for farcical slapstick, but finding much better success in the human comedy.

Things are going to get a whole lot worse before they even have a chance to get better for Zinos. His girlfriend (Pheline Roggan) is moving to Shanghai for work, his brother Illias (Moritz Bleibtreu) persuades Zinos to give him a no-show job so he can get a furlough from prison, the tax board took the restaurant's stereo as a down payment on money owned, and to top it off, Zinos slipped a disc trying to deal with his shoddy kitchen equipment. Zinos hires a hotheaded chef named Shayn (Birol Ünel) to pick up the slack in the kitchen, but Shayn is a gastronomic fascist. He's not going to offer that simple dreck the Soul Kitchen's only customers enjoy, he's got fancier dishes in mind. Disaster is just around the corner, or the perpetual loser may have finally found the right ingredients to turn it all around.

As life spirals into further craziness, Zinos will be offered one opportunity to bail out. A slimy school friend (Wotan Wilke Möhring) wants to buy his building and sell it to a developer (Udo Kier) so it can be leveled to make way for a shopping center. Zinos could take the money and run off to China to find his girlfriend, but he has a pathological dedication to the Kitchen. When Illias steals a bunch of DJ equipment, word of mouth and Zinos' taste in classic R&B begins to get people through the door, and Shayn's cooking compels them to stick around--but don't worry, no one is out of the woods yet. Where would be the fun of that?

There is something very likable about Soul Kitchen, even if the scarce belly laughs come from jokes older than Zinos' record collection. (The awesome soundtrack has cuts by Ruth Brown, Quincy Jones, Kool & the Gang, and others; Zinos' ringtone is Roger's "I Wanna Be Your Man.") Fires, slipping and falling, tumbling into the grave at a funeral, zany chefs throwing knives--Akin is trying for old-time screwball here. It's not his strength, unfortunately. The better stuff comes from his ability to write and direct people. It's the relationships between his characters, and the fine performances of his actors, that will keep you watching Soul Kitchen. The two brothers have an excellent rapport, and though Zinos' love affair makes the sad man-stuff in High Fidelity look grown-up and mature by comparison, the romantic seduction between Illias and the restaurant's waitress (Anna Bederke) has a certain magical charm.

All this means that by the time we get to the final act and the ridiculous rush to raise money to save the club (like I said: old plot here), it's a little hard not to want to root for Zinos and his pals to pull it off. Amusingly, I ended up watching Soul Kitchen on Christmas Eve to kill time before going out, and the movie, coincidentally enough, ends on Christmas dinner. Surprisingly, it's an understated, sweet finish, one that leaves you feeling good for spending your time in this cinematic eatery, even if you are wishing a little bit that the whole movie had been as subtle as its last couple of minutes. Don't get me wrong, Soul Kitchen is heartfelt through and through, but it's only in the end that the filmmakers get the seasoning exactly right. 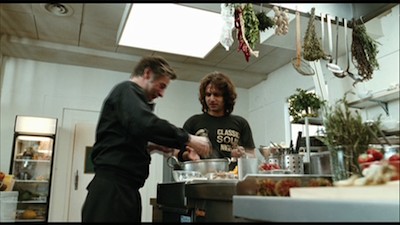 Video:
IFC has put Soul Kitchen on DVD as a 1.85:1 anamorphic picture. Color and details are strong, though the image can look a little hazy sometimes due to minor interlacing. The overall image is clear and free of any surface glitches. An average job, though honestly, we should expect better of a new movie by a director of this caliber in this day and age.

Sound:
The German soundtrack gets a really good 5.1 audio mix. The overall texture of the audio is warm, with particular attention paid to the all-important music. Your subwoofer will get a nice workout during the more beat-heavy numbers, with good, throbbing bass and no distortion.

Regular English subtitles are available, as are Spanish subs and English Closed Captioning. The subtitles are easy to read and are written well, including good translations of the vernacular humor.

Extras:
In addition to the theatrical trailer, the Soul Kitchen DVD comes with a pretty good 35-minute making-of featurette. It's pretty much what you expect from such a thing--interviews and on-set footage--but the program is informative and offers a bit more honesty than your standard hypefest.

FINAL THOUGHTS:
The latest from German director Fatih Akin sidesteps his normal intense dramatics for a more conventional stab at an old-fashioned farce. Soul Kitchen is like a German High Fidelity where the record store is replaced by a kitchen. Co-writer Adam Bousdoukos stars as the owner of a run-down, soul-music inspired restaurant who can't get it together when times are good, and so he's going to have an even harder time of it when his whole life goes nuts. The big gags tend to be obvious and overdone, but the character interaction ends up winning out. Recommended. 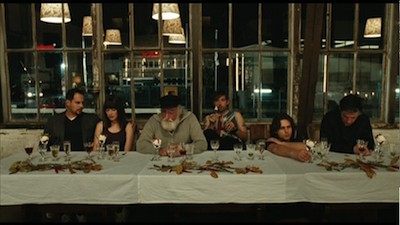