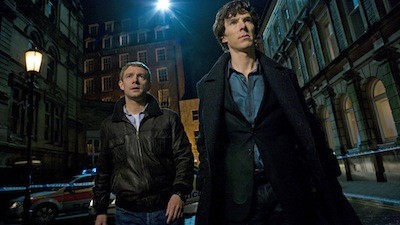 I'd like to think Mark Gatiss and Stephen Moffat's recent Sherlock miniseries is in response to Guy Ritchie's truly awful theatrical reimagining of the legendary detective that came out several months prior to this three-part series airing on the BBC. Moffat even does Ritchie one better in the modernization game, bringing Holmes into contemporary times without removing what makes him fundamentally Holmes. Whereas Ritchie turned the great detective into a mush-mouthed savant who could barely clean himself, Moffat makes him a clear-headed, driven investigator who is adaptable to technology and in love with "the game" when it is afoot.

In this Sherlock, Holmes is played by Benedict Cumberbatch (The Other Boleyn Girl, Four Lions). Cumberbatch's Holmes is a forensic scientist who makes a pest of himself in police circles, convincing his begrudging friend Police Inspector Lestrade (Rupert Graves) to let him "help out" on difficult cases. At the start of the first episode, "A Study In Pink" (loosely based on the original Sir Arthur Conan Doyle story "A Study in Scarlet"), his intent is to prove that a string of suicides by poisoning is, in fact, a string of murders. Hijacked and taken along for the ride is Holmes' newest acquaintance and soon-to-be roommate, Dr. John Watson. The Office's Martin Freeman, plays against type here, abandoning the cute and hapless comedy for a tougher nice guy. Watson is a war vet returning from Afghanistan and finding it difficult to settle back into non-combat life. Holmes offers him the action he misses, and in turn, he provides the straight-man commentary and some balance to Sherlock's impersonal way of dealing with people. The pair of actors make an excellent duo, and Moffat cleverly plays around with the image of these two men, setting up a running gag where people keep assuming the two are gay.

"A Study in Pink" quickly establishes the style of Sherlock. It's fast and smart, fueled by banter, but also all about the plot. Moffat is well loved in geek culture for his reinvigorating Dr. Who but whose best work, for my money, are the first three seasons of Coupling (plus, I can't stand Dr. Who regardless of the incarnation). For Sherlock, the writer cracks open the investigative process by using onscreen graphics and cutaways to bring Holmes' thought processes to life. Words and images appear in the air, and re-creations of events and flashbacks show us how Holmes works through the problems. It's a little A Beautiful Mind, sure, but it means the audience can go along with the detecting rather than having the solutions arrive out of nowhere, as if by magic.

Some credit should also be given to director Paul McGuigan (Lucky Number Slevin), who executes Moffat's script with style and verve. Indeed, Moffat shouldn't get all the glory for the clever devices--McGuigan is credited with having phone text messages appear in the air rather than cutting to the phones themselves. There is a lot to juggle in "A Study in Pink," what with having to introduce all the characters and also deal with the overall plot. The action material is clear and concise, and the mystery is wrapped up nicely. The team also drops hints of things to come, with suggestions of dangerous character flaws in Holmes' personality (largely via a mistrust from some of the other cops), a mention of Holmes' nemesis Moriarty, and an introduction of his rival and old brother, Mycroft (series co-creator Mark Gatiss).

"A Study in Pink" effectively hooks the audience into the series, and perhaps is too successful for its own good. From what I gather, the second movie (each show is about an hour and twenty minutes long), "The Blind Banker," is not as well-liked by fans. I say this, because everyone I talked to about the series before I watched it made a point of telling me the second installment was terrible. Perhaps they skewed my expectations, because though I was braced for the worst of the worst, I didn't find "The Blind Banker" to be all that bad. Its biggest failure is simply not being amazing. Were Sherlock a longer series, something more akin to a season on U.S. television, it would be an average entry, the one that stuffs the gaps between award winners and mind blowers. It's a fill-in episode, with a different creative staff (Torchwood's Euros Lyn directing, Steve Thompson writing) and even Inspector Lestrade getting a day off. Paul Chequer stands in as DI Dimmock.

The plot of "The Blind Banker" (loosely adapted from "The Dancing Man"), revolves around a pair of murders where the victims were warned of their impending death by strange graffiti. Assuming the yellow symbols are a code, Holmes sets out to crack it, uncovering a Chinese smuggling ring. Admittedly, the final act falls into some conventional places, with Watson's date (Zoe Telford) getting kidnapped by the bad guys and a last-minute rescue, but most of the lead-up works just fine. We see Holmes and Watson settling into their new partnership, both at home and in the field, and I found Martin Freeman's argument with a supermarket self-check-out machine to be worth sitting through the rest of the show all on its own. I'm surprised it has taken this long for someone to use this modern convenience for the sake of comedy. (Admit it, you've talked back to the computer grocer before!)

McGuigan returns to helm the last installment, "The Great Game," shooting a script by Gatiss, and the style and complexity returns, as well. In the final show of this very short season, Holmes is taunted by an unseen combatant who is setting up mini cases for him all over London. The catch is that with each new mystery, this unseen criminal mastermind has booby trapped a new innocent victim somewhere, and if Holmes fails to solve the case or someone tries to tinker with the bombs ahead of the deadline, they will detonate. Holmes enjoys the challenge, and as he tries to find how all of these tasks are connected, he sends Watson on a side case to help Mycroft and the secret service solve a murder of one of their lower-level agents and find the missing flash drive he had on him when he was killed.

"The Great Game" is a staggering, fast-paced ride that not only recaptures the initial magic of this new Sherlock but continues to push it forward and develop it. Sherlock's personality unfolds more, particularly after some taunting regarding Watson's blog, where the good doctor writes about their exploits. The rivalry between Sherlock and Mycroft makes for an interesting parallel to the competition the investigator finds himself in, and we also get a pretty cool villain, the supertall assassin Golem (John Lebar). In comparison, it does also shed more on what was missing with episode two. The unique storytelling, the use of graphics, etc., that takes us deeper into Sherlock's sleuthing was dialed so far down in "The Blind Banker," it almost seemed like an afterthought.

Fair warning, though the basic story in "The Great Game" gets a resolution, the show does end on a cliffhanger, which is a little frustrating. By this third film, Sherlock has really solidified. Cumberbatch and Watson have both gotten comfortable with their roles and understand how to add nuance to their performances--particularly Cumberbatch, who teases us with Sherlock's hidden contradictions. Sherlock follows the old showbiz axiom of leaving the audience wanting more, but doing it this way...well, that's just cruel!

Video:
My copies of the discs for the Sherlock: Season One Blu-Ray were press copies and did not come in their final packaging and thus may not reflect the final product. That said, the widescreen transfers here are excellent, with strong resolution, good rendering of the series' moody lighting, and nice flesh tones. If the retail version is merely this good, it is very good indeed.

The set has two discs, with the first two episodes on the first and the third episode on the second.

UPDATE with Final Retail Product: I have now received the final version. It comes in a standard Blu-Ray case with a spindle for a disc on each side. I took a look at episode 3 again, and the 1080p anamorphic image is, indeed, as excellent as I had seen in the press version. You can seek the BD out with confidence.

Sound:
The 5.1 audio mix on Sherlock is also very well done, with subtle but good speaker interplay. The balance between dialogue and music is perfect, but where I particularly noticed the strength of the soundtrack work was in the sound effects. "The Great Game," especially, with its use of real e-mail and phone messaging notifications. It took me a couple times before I realized it wasn't my phone.

Extras:
The discs have two audio commentaries. The first episode has a track with Moffat, Gatiss, and producer Sue Vertue; Gatiss returns for the third episode, but is also joined by the actors, Benedict Cumperpatch and Martin Freeman. Naturally, the focus between the two differs, with the first commentary being more about the production, and the actors' perspective taking charge of the third episode track. Both commentaries are chatty and pleasant to listen to.

Disc 2 also has two video extras: a short documentary on the making of the series, "Unlocking Sherlock," and also the unaired pilot, an early, shorter version of "A Study in Pink." The plot is fundamentally the same, but the sets are different and some of the modern wrinkles are still being ironed out. The making-of clocks in at half an hour, and is fairly standard, but still informative. The creative process for this kind of remodel is rather fascinating.

FINAL THOUGHTS:
Highly Recommended. Co-created by Stephen Moffat and Mark Gatiss, the BBC's latest incarnation of Sherlock Holmes is an excellent example of modern updating done right. Starring Benedict Cumperpatch and Martin Freeman as Holmes and Watson, Sherlock: Season One takes viewers on a clever run through contemporary London, giving us a new take on old favorites complete with the use of modern technology. Though rather short at only three ninety-minute episodes, and with one of those episodes being considerably less good than the other two, you may be frustrated that there isn't more, but then, that's not a bad frustration to have. It means you liked it!