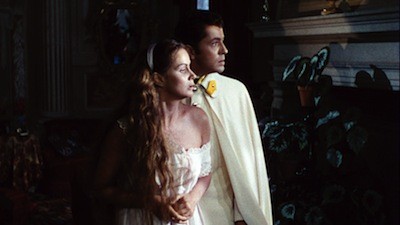 Senso is one of those film's with a history that is nearly as checkered and tragic as any of the melodrama that it depicts onscreen. Released in 1954, Luchino Visconti's colorful tale of love and betrayal in 19th-century Italy was met with scorn by Italian critics who disliked its politics and felt that Visconti had strayed too far from the Neorealist movement he had helped create. Also, despite featuring romantic leads who had previously had success in hit films--Farley Granger in Strangers on a Train and Alida Valli in The Third Man--and an English-language version that boasted dialogue by Paul Bowles and Tennessee Williams, Senso got little play outside of Europe, apparently only showing up on American television years later as the severely edited The Wanton Countess--a fate similar to Visconti's masterpiece The Leopard, also mangled on its way to U.S. audiences. As a result, Senso was a film talked about but rarely seen.

My major exposure to it was through Martin Scorsese, who talked about Visconti at length in his documentary My Voyage to Italy. Scorsese worked with Giuseppe Rotunno, one of three cinematographers working under Visconti, to restore the movie for the Film Foundation and Cineteca di Bologna and bring this Technicolor marvel to modern cinephiles in its complete glory. It's that print that has now made its way to U.S. shores and the people at Criterion, bringing a mid-20th century film about mid-19th century social mores into the 21st century at long last.

The title Senso pretty much translates as what it sounds like: "sense." Visconti's film is certainly designed to provoke the senses, particularly sight and hearing, the two fundamental ways in which we enjoy cinema. Senso is a masterfully constructed film, with opulent, expansive sets and a bold soundtrack that, in addition to its own evocative music, opens with a selection from a Verdi opera. These early scenes, set in a Venetian theatre, use the performance as a backdrop for our introduction to the movie's central relationships and conflicts. At the time of the film, Italy was not a whole country, and Venice was under the occupied rule of Austrian forces. When a nationalistic outburst causes an uproar amongst the split crowd, Austrian officer Franz Mahler (Granger) exchanges words with patriotic activist Roberto Ussoni (Massimo Girotti). Their argument ends in the challenge of a duel. When Roberto's cousin, the Countess Livia Serpieri (Valli), attempts to intervene on his behalf, an unlikely relationship between her and the enemy soldier begins to foment.

These happenings are surely operatic unto themselves, but Visconti's staging leaves no question as to the emotional tenor of his cinematic undertaking. There is a trifold effect in these scenes. There is the image of the stage production, with its semi-realistic but clearly fake sets; there is the "reality" in front of it, and the far more convincing illusion of Visconti's vision of Italy; and then there is the audience watching Senso, accepting its reality in the way the fictional characters accept the Verdi, knowing it is a concocted vision and yet choosing to go along regardless. All fiction has some kind of layered structure--a world within a world, objects within an object, be it words in a book (Senso is based on a novella by Camillo Boito) or a series of images captured on a DVD. Visconti wants to remind his audience up front that they are to be witness to a heightened experience. He was a firm believer in melodrama and its power to stoke the passions of the audience consuming it, and this set-up prepares the viewer to take it all in, the way a lavishly illustrated menu prepares them for a fantastic meal.

The duel that Livia fears never happens, though Roberto doesn't escape punishment. His public denouncing of the Austrians gets him a year in exile. Though she is sure that Franz is behind it, Livia is seduced by the man in uniform, and the two begin having an affair. It is interrupted by the onset of war, as Italy pushes to expel the invaders. This places Livia in a difficult position between the love of her country and her romantic feelings for Franz. Seeing him is risky, and she further tempts damnation by helping him find a way to escape the dangers of combat.

The performances by Valli and Granger are interesting. They are as finely mannered and sculpted as the magnificent sets in which they perform. Valli is a handsome woman with a strong physical presence. She carries herself as befitting a lady, but there is an intensity always apparent, smoldering just beneath her good manners and dignity. As Senso progresses, this comes out more and more, and Valli's performance grows more fiery as madness takes over. The word "sense" doesn't just mean the five physical senses, but mental as well. Our "sense," common or otherwise, is also our mind, our wits, and our sanity. Senso is a film about taking leave of one's senses. Farley Granger's performance also blossoms as the story grows more hysterical. Franz, too, has been holding back, but in a more dishonest manner than Livia's sense of propriety. As he reveals who he truly is, his wickedness borders on dementia.

Much of Senso takes places indoors, in high-ceilinged mansions full of amazing art and fancy furniture. These are fulsome settings for the selfish rendezvous of these ill-fated lovers to play out. In these confined spaces, they are alone and separate from the troubles of the world. Visconti contrasts these with the open battlefields, of a free Italy crying out for liberty with only the sky hanging over their heads. Likewise, in the early scenes, when Franz is courting Livia, the bridges and back alleys of Venice almost seem like something out of a fairy tale (not unlike the use of the city in Visconti's wonderful romantic 1957 film Le notti bianche); as things unravel, the city looks ashen and burdened by darkness. Design and color matter in Visconti's cinema; how everything looks is of equal importance to what is happening. Image is feeling, and there is a whole of feeling going on. 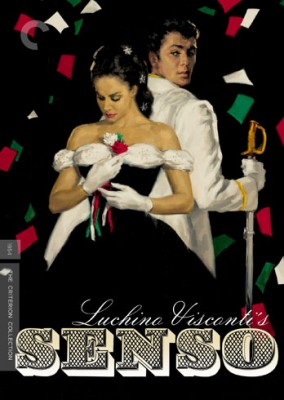 Video:
Criterion's much-anticipated Blu-Ray release of Seno presents a hi-def full frame version of the restored Film Foundation/Cineteca di Bologna copy of the 1954 film. The image quality is phenomenal, with rich, sumptuous Technicolor and a clean surface image. Detail is excellently tuned, and there is an overall warm, painterly glow to the look of the film. This is a movie that can be stared at without any concern for story or dialogue, its photography is an art object unto itself, and this digital release makes sure we get a glimpse of as much of each and every frame as possible. Keep an eye on background details, particularly in the last act of the film when Livia is back in Venice. Note how the walls and the objects on them appear. Compare the interior of Franz's hideout and all the decorations and the softer, though dilapidated textures, next to the altogether stark, pockmarked exterior wall that Livia walks along in despair--the level of texture in both is fantastic, though vastly different.

Criterion has also included the shortened English-language version, and though its picture is surprisingly good considering what a little-seen artifact it is, you can see a big difference between it and the more comprehensive clean-up on its main counterpart.

Sound:
Along with the full video restoration, we also get a newly mixed, uncompressed monaural soundtrack. The sound levels are very good, richly realized and filling the speakers to create a big roar without any distortion. The optional English subtitles are also easy to read and well done.

Extras:
The usual Criterion booklet comes complete with photos, credits and chapter listings, an excellent history of Senso by Mark Rappaport, and an excerpt from the autobiography of Farley Granger.

Included amongst the extras is the aforementioned English-language version of Senso, with its more suggestive title The Wanton Countess. Presented in its entirety (though a good half hour shorter than the Italian version) and in full high-definition, it is interesting to peek in on, but not essential viewing. The big sell on this version is the actors are not dubbed over in Italian and you get a more accurate representation of what is presumed to be the contributions of Williams and Bowles.

A new documentary, "The Making of Senso" (34 minutes), takes us deeper into the history of the film as detailed in Rappaport's essay, including looking at the source material and examining why the movie was so scandalously received. Commenting on the material are surviving crew members, including Giuseppe Rotunno, as well as the daughter of one of the screenwriters. Also new is the 36-minute documentary "Viva VERDI", which digs further into Visconti's connection to opera. Visconti's career in theatre and opera and how it pertains to his filmmaking is further explored in the one older extra, a 1996 BBC special titled "Man of Three Worlds: Luchino Visconti" (48 mins.). It's an excellent overview of the director's approach to his craft.

The highlight for me in the supplemental section, as always, is the visual essay by Peter Cowie (28 mins, 27 seconds). Cowie does his usual excellent job of pulling together all kinds of different materials to show the influences and the aesthetic technique that makes Senso so intriguing. Extras:

FINAL THOUGHTS:
Highly Recommended. The Senso - Criterion Collection Blu-Ray is another outstanding release in the company's ever expanding film library. The 1954 film from Luchino Visconti is a visually exciting melodrama of love and compromise. Set in the mid-1800s in Italy, it stars Farley Granger and Alida Valli as a soldier and a society woman from different sides of the same war who find love where they shouldn't and ultimately pay the price. Utilizing a recent full-bore restoration of the picture and packing the disc full of substantial bonus features, this release of Senso is high-brow home viewing at its finest.