Other Side of Paradise, The 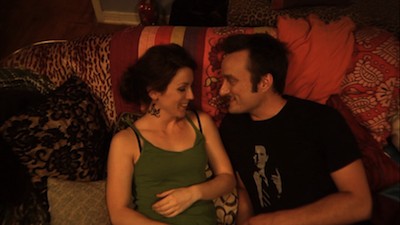 Down in Texas, Rose Hewitt (Arianne Martin) has a lot going on in her life. Her best friend Alex (John Elliott), with whom she has shared a long-term flirtation, has just returned from an extended vacation in Spain, where he presumably left his on-again off-again girlfriend for good. Rose's brother, Jamie...excuse me, James (Frank Mosley) is also being released from a two-year prison bid. Straight from picking Jamie up outside the jail, the three of them are going to visit Rose and Jamie's father (Jodie Moore) and his new, pregnant wife (Susana Gibb). This will be the first time meeting the little lady. Or so they think. Courtney was a senior in the same high school as Rose when her stepdaughter was a freshman. It's Courtney that will accidentally tell Jamie and Rose that the mother they haven't seen in more than twenty-five years is living near Austin. With that little family secret exposed, it seems about the right time for a road trip.

This is the set-up for The Other Side of Paradise, a new indie drama that, as convoluted as it may sound when distilled into an introductory paragraph, has a surprisingly natural way of telling its story. Directed by Justin D. Hilliard, and written by Hilliard, Martin, and cinematographer Ryan Hartsell, The Other Side of Paradise manages to be a whole lot of movie without ever feeling encumbered by its own ambitions. Which is a far cry from Hilliard's debut, Wednesday, in which the filmmaker got a bit tangled in his vision. They often say the second time is the hardest, but not this time.

From daddy's house, the traveling trio makes their way through Texas in search of, ostensibly, the things that are missing in their lives. For the siblings, it's to find the mother they thought had gone to Portugal and never come back, but they are also searching for a sense of purpose. Jamie seems to be itching for freedom, while Rose is just itching...well, for anything. A photographer with a gallery show on the horizon, she is in need of one last image to tie it all together. Maybe knowing where she comes from will inspire her. It might also help her trust Alex, whose way with words makes him seem too slick. As it turns out, Rose is exactly what Alex has been after, but he hasn't exactly figured out how to let himself be with her. 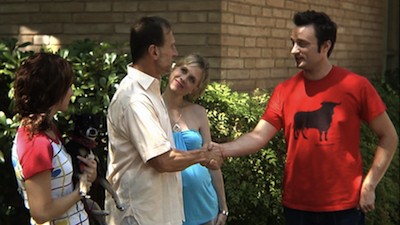 Which again sounds way more complicated than Hilliard makes it. The Other Side of Paradise isn't a movie where characters state their intentions, they just get in the car and go. The subtext is all in behavior--the things they do and don't do, what the characters screw up and what they try really hard to get right. The best scenes in the movie are the ones where Alex and Rose simply talk. The actors have a very honest rapport onscreen, and even though the characters have known each other for a long time, many of their conversations don't seem all that far off from the kind of things people would talk about on a first date. They may have been in love with each other for a while, but this is their chance to finally get a handle on how to be in love with each other.

Naturally, since this is a road trip, there will be many interludes and odd encounters along the way. Some of these work and some don't. There is one fantastic sequence when, during a game of truth or dare, Jamie is dared to walk up to a random girl (Lindsey Holloway) and kiss her. It's a magnetic moment, and it's one of the few times Jamie doesn't feel like a storytelling third wheel. Other stops don't fare as well. Particularly, the broader the comedy, the less convincing it tends to be. The local yokels this trio con and cajole stray too far into caricature, and the jokes fail to come off when placed next to the very real and wholly believable relationship stuff.

In fact, the more real The Other Side of Paradise gets, the better it becomes. About 3/4 into the story, Hilliard hits the audience with a dark turn that sends the movie into some pretty raw territory. It's a shift that could completely dismantle what he's built up, but the director gets away with it. These events force Rose and Alex to put all their cards on the table and then make some hard choices about which ones to pick up again.

Again, the actors really back up the writing here. Martin and Elliott prove themselves as more than capable of dealing with heavy stuff. They don't flinch from the rough patches. Mosley is also at his best when he's more intense. The way he and Jodie Moore lock eyes, squaring off with one another when they are back at the old man's home, suggests a long-term rivalry between father and son. The anger is offset by the bubbly earnestness of Susana Gibb, who easily has the stand-out supporting role as the stepmom. The fact that the first half hour and the last half hour leave such an impression makes me wish all the more that there had been some judicious editing in the middle. Hilliard, who also cut The Other Side of Paradise, lets his scenes meander. Sometimes it's good, it allows an authentic moment to emerge, but sometimes he needs to get out while the gettin' is good. 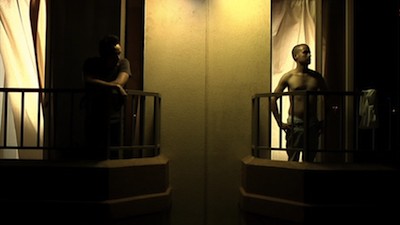 I reviewed Justin D. Hilliard's first film, Wednesday, back in July of 2006, only a short time into my writing about film regularly. (I started with DVD Talk that April, and now, 1,000 reviews later...) Despite the movie's flaws, I was impressed with the fact that it was a genuine independent production. Hilliard and Hartsell put the whole thing together themselves, got their movie on film, and self-released the DVD. (There website is here.) Since the 1990s, "indie" has become an adjective that has meant many things. It's rarer than you might think that guys like this are crazy enough to go get it done, much less being able to do it well. Thus, the fact that The Other Side of Paradise shows so much improvement and an increased level of confidence is all the more gratifying. The movie never looks cheap. Hartsell's camera work has real movement, and he knows how to capture talking heads without letting the conversation seem static. Sometimes the bright natural light gets the better of him, and a couple of scenes look a little blown-out, but that also can work in his favor when heat is required.

It's actually hard not to think of another second independent feature that took filmgoers on vacation to a paradise that didn't entirely live up to its name. The loose, of-the-moment style of The Other Side of Paradise has some good things in common with Jim Jarmusch's 1984 film Stranger Than Paradise. Like Jarmusch, Hilliard and Hartsell have begun to establish their own ensemble. Their Striped Socks production company has turned into quite a family affair. Hilliard and his star, Arianne Martin, are married in real life, and Randi Frances Hilliard, the director's sister, is not only credited with production design, costumes, and art direction, but she has a bit part as the "Bitchy Cashier." No big revelation, then, that Rose's dog in the movie belongs to Hilliard and Martin, as well. (Hilariously, the pooch's full name is Larry David.)

Unsurprisingly, Hilliard and crew have already finished a documentary about the film festival circuit (3 Thumbs Up), and they also have a sci-film called Swallow listed as being in pre-production. Clearly, these folks are in it for the long haul.

Which is good news. Based on The Other Side of Paradise, the Striped Socks crew has got a lot to show us. Paradise is a solid relationship movie that, despite not hitting every mark it aims for, gets it right when it really counts. Like any romance, you won't love every single second you're in it, but since you walk away feeling good about what happened to you, you don't really mind. 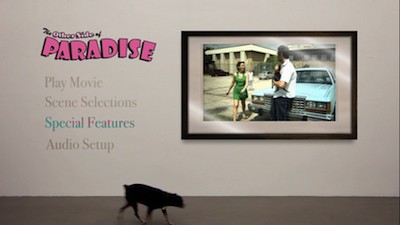 Video:
The anamorphic widescreen transfer on The Other Side of Paradise looks really good. Colors have a natural tint, and there is nice detail, including a fine cinematic grain. Occasionally, there is a small amount of soft edges to the resolution, but it's not a regular occurrence. For a small production, it looks fantastic.

Sound:
There are two sound mixes available--a 2.0 stereo mix and a 5.1 track, both in Dolby Surround. The 5.1 doesn't have a lot of effects to it. There is some occasional ambient noise that moves to the back speakers, but it's mostly a down-the-middle mix that only really fills the room when the music is amped up.

Extras:
The bonuses begin with the fun menus on the DVD. The different screens are connected by Larry David the dog running from room to room.

The dog is actually there for the full-length audio commentary, too, but he has very little to say. He leaves that to Hilliard, Martin, Mosley, and Hartsell. The track is a chatty affair with lots of friendly banter and anecdotes from the production, detailing the effort it takes to put together a movie like this. Sometimes their joking around can derail the talk, but they always find their way back. John Elliott also joins in on speaker phone, and coincidentally, it's during the love scene, which is kind of perfect. 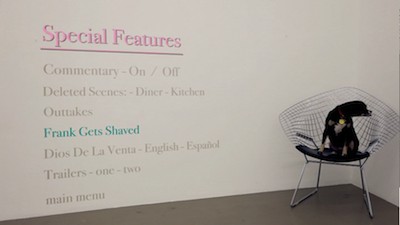 There are two deleted scenes. One is a short conversation between Alex and Rose that takes place after she picks him up at the airport, and surprisingly, it contains a lot of exposition about who these people are and where they are going. Most of it is stuff that comes up later, but a few details (Alex being a writer, the town being called Paradise) are never really expanded on in the same manner. The second is just 30-seconds long and is a short joke about Alex's facial hair.

An outtake reel runs just under 10 minutes, and has the expected flubs and pranks. The two-and-half-minute "Frank Gets Shaved" is just as playful, and it shows Mosley shaving his head and his beard for the role of Jamie.

Rounding out the supplements we get both the English and Spanish version of "Dios De La Venta", the fake commercial featured in the movie. There are also two trailers for The Other Side of Paradise.

FINAL THOUGHTS:
The Other Side of Paradise is a surprisingly assured indie drama that uses the road trip genre to build a believable relationship story. A guy, a girl, and the girl's brother all hop in a car and head down the Texas backroads in search of family, love, and whatever else might be there. It's an imperfect journey, some of the drama fails, but the filmmaking and the acting are impressive and the emotional core of the script is true and strong. The independent roots that feed The Other Side of Paradise are obvious, but they are never a handicap. Even the DVD looks like a bigger production than it actually is. If you like films that come from somewhere off the beaten track, take the time to find this one. Recommended. 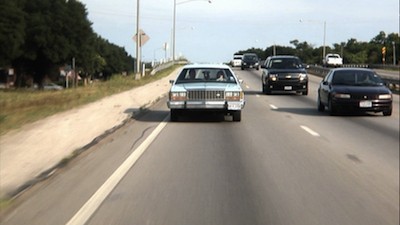