Two In The Wave 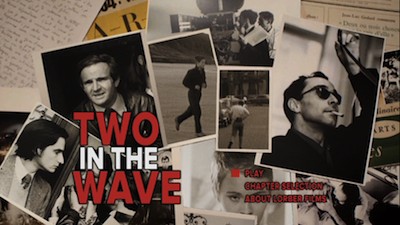 There is possibly no period in modern film history that cinema fanatics are more eager to mythologize than France in the 1960s. I think only America in the 1970s can even come close and/or surpass it. From amidst that period, no two filmmakers are more loved or hotly debated than Jean-Luc Godard, the irrepressible artist and trickster, and Francois Truffaut, the expert craftsmen. The camaraderie shared between these two different filmmakers seems like obvious material for a documentary. Thus, Emmanuel Laurent's Two in the Wave is a no-brainer, examining how this pair of movie devotees became friends, their rise through the ranks of the motion picture industry, and the back-and-forth they shared in their work through the 1960s, leading to the bitter split that would, arguably, signal the end of an era.

I say arguably because though it's a theory Two in the Wave attempts to illustrate, it's one of Laurent's failings that he takes it on faith that his audience will agree. So what if we do? Your film would be much more interesting if you were to back up your declarative statements with a little more illustration and fact.

Not that this hiccup ruins Two in the Wave, nor should it really be the dominating point of any discussion of the documentary, but since the film ends on the acrimony and the intriguing conundrum of how actor Jean-Pierre Leaud was caught in the middle, this section of the plot tends to stick with you. It's the element of the Godard/Truffaut story that gives their narrative an actual arc, like something great fiction would emulate. As we learn in the much better beginning of the documentary, here were two men who found a common ground in the darkened halls of movie palaces, and who would chase their vision together, mutual admirers looking to change how things were done. Laurent lets us into this period via clips from the films the pair made and interview excerpts from all manner of sources--audio, video, text. Though his timeline is disjoined, Laurent builds slowly from one moment to the next, finding the common threads and then rooting out their origins. There are very few outside voices, the subjects do most of the talking, and given how well they documented their own thoughts on the topic of movies, there's plenty to go with.

Then again, Laurent maybe overextends his hyperbole even in those stages. The uninitiated who pick up Two for the Wave to find out more about these personalities and their work will likely find themselves intrigued by the snippets they see, but they probably won't be entirely clear on how their revolutionary technique reverberated through international cinema and how what they accomplished foreshadowed what was to come. This is a place where some outside commentary might have done some good. Instead, Laurent keeps the point of view limited, and not technically to the perspective of the filmmakers, but more accurately to the point of view of Antoine de Baecque. Baecque was an editor at Cahiers du Cinema and he provides the script and the voiceover for Two in the Wave. His research is incredibly detailed, and together the writer and the director develop a style that recalls Godard's post-60s "essay films." This is moviemaking as collage, with a single narrator driving the mis-en-scene. There is even a staged device of a girl film fan who digs through the old magazines and watches the films being examined in a private theater.

By the time we get to the dissolution of the friendship, it should feel like a cataclysmic event, both on a personal scale and also in terms of greater artistic concerns. We are told that the latter element was important, that it ended an era, but again, Two in a Wave is so self-contained, you are either with it or you aren't. It's not going to do much to pull you over to its authors' way of thinking.

Even so, I am always up for a good reverie when it comes to the French New Wave, and I'll never tire of seeing clips from classics like Breathless and Jules and Jim. Plus, though Two in the Wave may not be entirely successful at conveying what it all means, Laurent and Baecque definitely get it right in terms of showing the bonds between Godard and Truffaut. This good outweighing that bad is not really all that bad a thing unto itself. 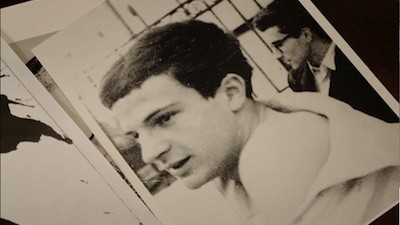 Video:
Two in the Wave is a widescreen, Region 0 DVD. The compiled material is from a variety of different sources, with a variety of aspect ratios and jumping between color and black-and-white. The program looks good overall, with above-average resolution and a consistent clarity that shows the conscientious assembly and the careful digital authoring that went into this release.

Sound:
The soundtrack is present in its original French, mixed in two-channels. This is not a film with a fancy soundscape so the straight-ahead presentation works best. The audio is always clear and the tones are good. Likewise, the English subtitles are easy to read and go by at a manageable pace.

FINAL THOUGHTS:
Recommended. Despite its flaws, Two in the Wave tells an essential cinema story. As part of the French New Wave of the 1960s, Jean-Luc Godard and Francois Truffaut changed motion-picture making forever. Their core friendship makes for a fascinating story of artistic daring, and though this documentary loses its way when it comes time to add greater meaning to how everything fell apart, it's still worth it just for the great collection of clips from old interviews and also the movies the pair made. Their output for nearly a decade made for a stunning aesthetic back-and-forth, and the finer details of how that came together are not to be missed. 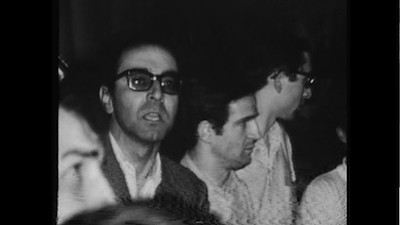