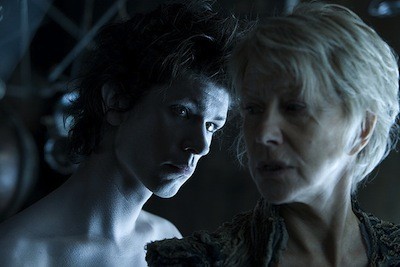 The Tempest was William Shakespeare's last play. Some say you can see the concerns of an old man in its text. The plight of Prospero, the isolated wizard, who spends the play going over the past and restoring a sense of order to the lives who helped and harmed him may be the Bard looking back at his own work. There is a sense of summation to a few of the plotlines, of going over worn ground. There is also an added element of the fantastic--a wizard, a fairy, a monster. Perhaps the author was dreaming of what lay beyond the flesh.

Filmmaker and stage director Julie Taymor certainly knows a thing or two about the fantastic. She's the one who successfully put The Lion King on Broadway and is in the midst of a spectacular failure trying to do the same with Spider-Man. Her films have had varying success, too. She brought art to life in Frida, but ruined the Beatles in Across the Universe. Her most popular film is arguably her other Shakespeare adaptation, the audacious Titus. Fitting then that she return to the Globe Theatre to take on The Tempest and harness that magic again.

For her new version, Taymor has switched the gender roles of two of the main characters. Prospero is now Prospera, and she is played with strength and knowing wisdom by Dame Helen Mirren; Ariel the sprite, who could really be cast as either gender, but who is often played by a girl, is portrayed here by the sinewy Ben Whishaw (Bright Star). Ariel is a servant of Prospera on the island where she lives in exile with her daughter, Miranda (Felicity Jones, Cemetery Junction). Ariel is looking for his freedom, but his relationship with Prospera is still somewhat friendly. The sorceress' other servant, the monstrous Caliban (Djimon Hounsou), is not as cooperative. Prospera wrestled the island from his mother, herself a witch.

The story of The Tempest takes place over a short period of time. Prospera uses her magic to whip up a storm and strand passing sailors on her island. Amongst their numbers are the men who did her wrong: the king who usurped her power (David Strathairn), his treacherous brother (Alan Cumming), and Prospera's own brother, Antonio (Chris Cooper), who led the coup that sent her packing. The king's son (Reeve Carney) is also on board, and Prospera encourages his romance with Miranda, who left Naples so young, she doesn't remember ever meeting a man before. Also on the island now are two drunkards--the comic relief, as it were. They are played with gusto by Alfred Molina and Russell Brand, who far and away are the most memorable things in the movie even if their jokes don't really hit modern funny bones. It's their delivery and the physical comedy that shine through. They have a subplot where they get Caliban drunk--schtick that Hounsou is surprisingly good at. The three of them light up the screen whenever they appear. 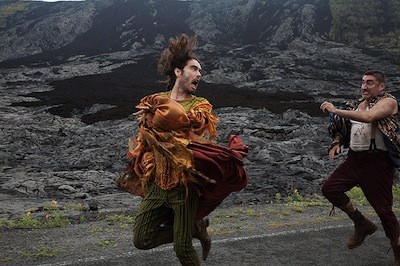 That is, when Taymor isn't lighting it up with her dazzling visuals. Though not nearly as outlandish as Titus in terms of its story content, The Tempest still gives her much to play with. She uses digital effects to create the storm and Prospera's magic, toying with painterly realism to create something just the right side of unbelievable. Her portrayal of Ariel is a lot of fun. She never shows him as a solid being, he is a part of the elements. He appears all over the island, growing in size and even multiplying in number. Whishaw has a good time with it, cutting a Peter Pan-like figure, though a Pan who has maybe grown weary of Neverland. He still enjoys mischief, but there is an underlying melancholy that reinforces his desire to be free.

Taymor also makes great use of the island, building Prospera's hideaway into the rocky cliffs and letting nature work its own magic on the shipwreck victims. The only time her effects team fails her, actually, is when she tries to create living creatures out of nothing. There are some fiery devil dogs that, even if they look fake by design, are distractingly fake. Also, a great gag with Brand and some frogs fails to come off because the animated frogs aren't well integrated into the scene.

All in all, Taymor's production of The Tempest is very well done. I've only ever seen the play performed once before, and that was a local college production earlier this year. By any comparison, that was a very bad production, full of wooden acting, odd staging choices, and an unrelenting sluggishness. Unfortunately, seeing a better staging of The Tempest has made me realize that the sluggishness is actually a fault of the material, the collegiate troupe wasn't entirely to blame (though they certainly didn't help). There are too many characters, too many subplots, and Shakespeare takes forever getting those plots going. The story follows a rigid structure of plot 1, plot 2, 3, 4, and so on. Lather, rinse, repeat. Taymor does nothing to alleviate or streamline this, and so there are long stretches of her movie that just plod along. It's practically half over before you realize who all the players are and what their relation is to one another. (She could have also cut the songs, including the sappy music video between the teenage lovers, but that's a whole other point.)

What this means is The Tempest is a well-executed movie, but one that executes material that doesn't speak to me. It's hard to impugn Shakespeare, his work continues to inspire new generations for a reason, and I'd be curious to hear what someone who likes The Tempest's source text thinks of what Taymor has done. The adaptation is certainly worth a look for her vivacious aesthetic, if nothing else. 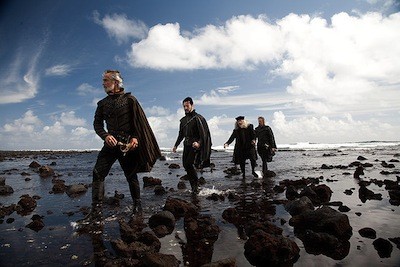