The Criterion Collection // Unrated // March 29, 2011
List Price: $39.95 [Buy now and save at Amazon]
Review by Stuart Galbraith IV | posted March 27, 2011 | E-mail the Author
Clearly meant as a companion piece to Criterion's concurrent Blu-ray release of Mike Leigh's Topsy-Turvy, The Mikado (1939) is more the fascinating artifact than compelling cinema on its own terms. It's basically a filmed performance of the D'Oyly Carte Opera Company's version of Gilbert and Sullivan's comic opera, compromised only slightly by Hollywood commercial demands with half-hearted attempts to make it less stagy and more cinematic.

I suspect Criterion originally intended to include The Mikado as a second-disc supplement to Topsy-Turvy but that for some reason the decision was made to make this a stand-alone release, albeit one unavoidably tied to Leigh's film, a movie that dramatizes the contentious, tumultuous creation of the original production during 1884-85. As Leigh himself notes in a wonderfully useful interview accompanying this Blu-ray release, The Mikado squarely falls into that category of stagy filmed shows as opposed to more cinematic movie musicals made from the ground-up. The structures and the staging that work so well for Gilbert and Sullivan in live performances don't translate particularly well on film.

What's left is a kind of visual document, albeit an invaluable one, of a moderately Hollywood-ized record of a D'Oyly Carte production, itself mostly faithful to its 1880s source. As a filmed comic opera, one can enjoy the preserved performances, the wonderful music, the gorgeous Technicolor photography, and the outrageous art direction and costumes.

The Blu-ray is a knock-out, one of the richest 3-strip Technicolor releases in high-definition to date, and the extra features all enhance the viewing experience, putting both the show and this adaptation into historical and cultural context. 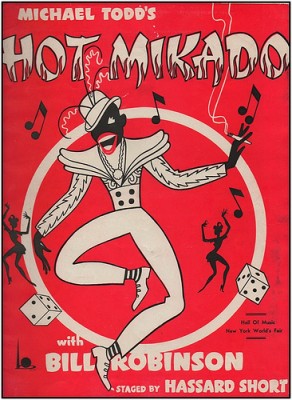 Ad art for Mike Todd's stage production of Hot Mikado. Excerpts from a radio performance are included as an extra feature


The story is set in the (fictitious) Japanese town of Titipu where wandering minstrel Nanki-Poo (Kenny Baker, more Alan-a-Dale than Toshiro Mifune), in fact the son of the Mikado (John Barclay), has fled to avoid an arranged marriage to grotesque, elderly Katisha (Constance Willis). Nanki-Poo is himself in love with Yum-Yum (Jean Colin), the ward of former tailor Ko-Ko (Martyn Green), newly appointed Lord High Executioner. (And, for reasons too complicated to explain here, also first in line to be executed.) But local official Pooh-Bah (Sydney Granville) informs Nanki-Poo than Yum-Yum and Ko-Ko are scheduled to marry the very next day, leaving him distraught and suicidal, though this is hard to tell from Baker's performance.

Ordered by the Mikado to execute somebody within a month's time, Ko-Ko strikes a bargain with the suicidal Nanki-Po: Ko-Ko allows him to marry Yum-Yum provided he surrender himself for execution one month later.

The 1939 film of The Mikado was apparently financed in America (and released by Universal) but actually filmed at Pinewood Studios in Britain using a mix of American and British talent. Director-popular songwriter ("I Remember You") Victor Schertzinger had helmed Hollywood movies like One Night of Love before this, and would directed the first two Hope-Crosby "Road" movies just prior to his untimely death in 1941. The crew was a mix of talent, some probably hired to comply with various union demands, though director of photography William V. Skall was another American, Skall specializing in the burgeoning Technicolor format.

Boyish singer Kenny Baker (The Goldwyn Follies, The Harvey Girls) was the other significant American contribution. His singing voice is pleasant but Baker seems utterly oblivious to the show's ironic humor, though he's quite good in the romantic scenes with Yum-Yum.

Looking at it today, this Mikado is colorful but extremely static, at times playing like a two-color Technicolor musical from the late-1920s rather than a three-strip, late-1930s one. The D'Oyly Carte actors generally fare better than Baker, particularly Sydney Granville's richly detailed Poo-Bah and Constance Willis's amusing Katisha, both charming throughout. (Willis is like a British Verna Felton.)

Martyn Green was apparently a big D'Oyly Carte star, his Ko-Ko so famous the filmmakers were reluctant to tamper with it. Subsequently his performance is both charming and overly theatrical. Nonethless, I'd bet money Green's performance was a big influence on comedian Groucho Marx, a Gilbert and Sullivan fanatic surely aware of the film given that Kenny Baker co-starred in the Marx Bros.'s comedy At the Circus that same year. Twenty-one years later Groucho himself played, none-too-well alas, the role of Ko-Ko in a television production of The Mikado, and his performance (some of which has been posted on You Tube) clearly reflects Green's influence.

The other main attraction is the outstanding, Oscar-nominated cinematography and wild art direction and costume designs by Marcel Vertès. While Hollywood and British movies of the period weren't exactly known for accurate recreations of Asian cultures and locales, The Mikado takes literary license to a new level. It's so wildly, hilariously inauthentic that it becomes fascinatingly naïve. Kanji characters appearing on banners and signage are frequently upside-down or completely fabricated. The architecture is all wrong, with Japanese houses sporting western-world window frames, including slatted shutters. Would-be samurai wear extravagant feathers on their shoulder armor and at one point blue-eyed Baker plays a western-style trombone fashioned out of bamboo!*

Yet it's all very colorful and captivating. An early shot even incorporates dream-like clouds in this Candyland depiction of Edo Period Japan. And some of the elaborate sets make excellent use of forced-perspective, a cost-saving trick later frequently employed by the Japanese themselves, in film versions of Chushingura and other historical film epics.

Wow! Criterion's liner notes mention only a 35mm interpositive which I assume must have been derived from the original black-and-white separations, judging by the extremely rich quality of the color, the sharpness of the image throughout. It's both free of dirt and any notable matrix misalignment.

The cleaned-up mono audio still reflects the limitations of 1930s recording technologies. Solos come off well, but I found myself switching on the optional English subtitles in order to catch all the lyrics during some of the big chorus scenes. The disc is region "A" encoded and copy-protected. Menu screens are attractively and sensibly designed.

Supplements greatly enhance the viewing experience. Director Mike Leigh's personal yet very informed comments are useful and exactly what the disc needs. Scholars Josephine Lee and Ralph MacPhail, Jr. help put the film version into context from a more Gilbert and Sullivan purist perspective, likewise interesting. Also included is an equally gorgeous silent film promoting a 1926 production of The Mikado by the D'Oyly Carte Opera Company. The clarity is sensational and some of the footage is even hand-colored. Another extra is a deleted scene of Ko-Ko's "I've Got a Little List" number, deleted possibly for its references to Hitler and Chamberlain, or perhaps its politically incorrect use of the "N-word." As examples of The Mikado's huge influence in 1930s America, radio excerpts from two loose adaptations, The Swing Mikado and The Hot Mikado (shades of The Pirate Movie!) are included, and finally a booklet essay by Geoffrey O'Brien further enhances the viewer's understanding of the film version. (It's too bad clips from the 1960 TV version with Groucho weren't included as well.)

Ideal as a second feature accompanying Topsy-Turvy, The Mikado is colorful and often charming though very stagy. It works best as a fascinating artifact, an adjunct rather than a stand-alone feature, save for Gilbert and Sullivan fans and those fascinated by western world depictions of Asian cultures. But the transfer is gorgeous and the film deserves to be seen at least once, and thus comes Highly Recommended.

* Mostly in the background but prominently featured in the movie's final shot is a gong-ringer wearing an elaborate green mask that's virtually a clone of the monsters featured in the Japanese movie Terror Beneath the Sea (1966).