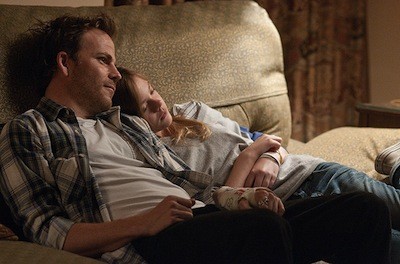 A Sofia Coppola film is a far too rare and delicate thing.

This is not a criticism, it is a positive impression.

Her fourth feature-length movie, Somewhere, may be a thematic sibling to her most famous film, Lost in Translation, but stylistically, it couldn't be further away from her previous efforts. It's something more akin to the work of her friend Zoe Cassavetes (Broken English), a movie that is more immediate and real, a patchwork of mumblecore and verité, a creation more captured than planned.

Stephen Dorff stars in Somewhere as Johnny Marco, an actor famous for what appears to be middle-brow action fare. No criticism is made of Johnny or his oeuvre, but we get an inkling that he is maybe better known for his good looks and his tabloid antics than he is his application of craft. At the start of the movie, Johnny Marco is literally driving in circles. He has no purpose. Johnny is a man displaced. He lives in a hotel, separated from stable life, following a schedule laid out for him rather than actively engaging in what is happening. Whether it's watching a pair of twin strippers work the temporary poles they set up in his rented room or getting a plaster cast made of his head, the pampered movie star approaches each scenario with the same laconic dissatisfaction. Coppola actually turns the latter into a visual metaphor. Johnny is a man without a face. He'll even refer to himself later as a "not a person." On the same beat, when the special effects guys are done with him, they've turned him into a reasonable facsimile of himself as an old man. Johnny could be this aged creature. He is as much that face in the mirror as he is not. 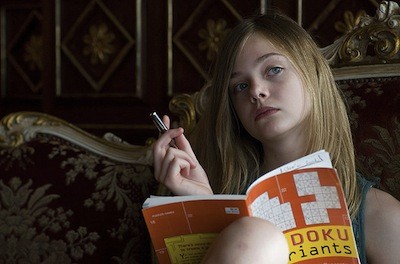 One thing in Johnny's life that is not part of the Hollywood rigmarole is his daughter, Cleo (Elle Fanning). Since dad is generally unaware of what day it is, Cleo's scheduled visits drop on him like a surprise. On their day out, he takes her to the ice skating rink, and he's surprised to see how good she is on skates. Cleo tells Johnny she has been training for three years. Clearly, this is not a guy who pays attention. It's no wonder that naked women just appear in his hotel room; if they waited for him to call, they'd spend those evenings alone. One of them may even be the person sending him belligerent text messages from an anonymous number. It's one of Somewhere's many tiny mysteries.

Somewhere takes a narrative turn when Johnny's ex-wife inexplicably decides that she is "going away for a while" and won't be coming to pick Cleo up. Though the ten-year-old girl proves capable of many things (like making what looks like a delicious eggs benedict), her time with dad will still be an education. She goes from misconstruing his exiting a strange woman's hotel room as him having gone across the hall to use her bathroom to sharing breakfast in Milan with an Italian lady who clearly spent the night.

This new father/daughter relationship, however short-lived, also ends up being an education for Johnny. The normalcy of the time spent being a family begins to restore his humanity. Even if some of his efforts at restitution are a little pathetic, it effects a profound change in him: he finally starts to see what he is missing. Granted, Somewhere's main story sounds like a plot that's as old as movies themselves. Put Dwayne "The Rock" Johnson in this script, and you have another stinky family comedy just waiting to fill box office diapers. Sofia Coppola, thankfully, is far too gifted a storyteller to let cliché get the better of her. There are no lessons or wisdom imparted, Somewhere isn't a film where characters tell us how they are transformed. Action informs meaning. 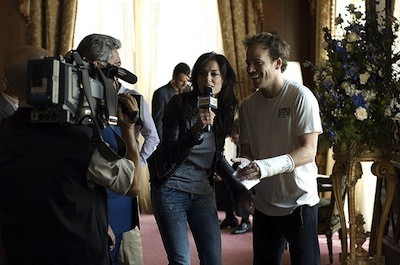 Stephen Dorff is surprisingly perfect for the role. Johnny says little, and if his press conference in the movie is anything to go by, it's because his facility with expressing himself is limited. Yet, Dorff still communicates with the audience. One would think from the summary he's just rehashing his role as the famous boyfriend in the Britney Spears video "Everytime," but he goes deep with it. The actor looks so profoundly sad and broken through most of Somewhere, it's actually kind of amazing when he shows Johnny seizing an opportunity and going into bad-boy mode. There is also a remarkable unguarded moment in an elevator with Benicio Del Toro, in a cameo as himself, when the two realize they are both famous and can be "real." Letting their facades drop only reveals the shallowness of said reality.

Coppola lets her movie unroll at an easy pace. Much of the story is driven by her just following Johnny through his days, and in some cases, that means actually being driven. There are long stretches of him careening through Los Angeles in his tricked-out Ferrari. The terrain is unmistakable for anyone who has ever spent any time in the city or ever traversed its freeways. Somewhere was photographed by Harris Savides, who has shot films as far apart in style as Fincher's Zodiac and Baumbach's Greenberg (another L.A. picture), though his work here more recalls his guiding Gus Van Sant through his experimental phase--Gerry, Elephant, and Last Days. It's all about underworking the scene, letting the unpolished drabness of the locales come through. There are a lot of grays and browns in California, and the Chateau Marmont is as dressed down as Dorff, whose wardrobe is basically jeans and T-shirts. It's a kind of backwards magic. This is the land where cinematic dreams are made, but its waking life is about as mundane as you can get.

It takes a certain kind of writerly daring for Coppola to pull back as much as she does. For a woman who won the Academy Award for Best Screenplay for Lost in Translation, she risks being accused of slouching here. That would only be a charge made by those who don't understand how writing works, however, who don't know it requires just as much skill, if not more, to script the silence as it does to lay out a conversation between two people. The fact that Somewhere really does have somewhere to go, and that its ending is as satisfying and elusive as Translation's, is all the proof necessary that Coppola is as in command as she ever was. She knows exactly what she wants out of each scene, and she builds her story piece by piece. It's all the more pleasing that the technique is so absent, you don't see the raconteur at work. Somewhere struck me deep down, and it kept me up most of the night after I saw it. I just kept working it through in my mind, recalling the finer details and letting the humanity settle in. My estimation of the film only grew in the process. Somewhere creates a feeling in the viewer that is hard to shake, and I can't imagine a day when I'll want to. 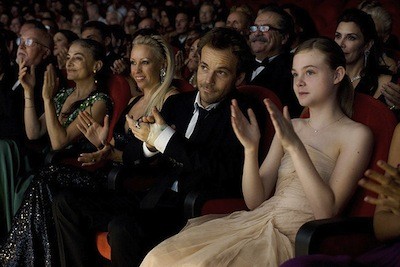