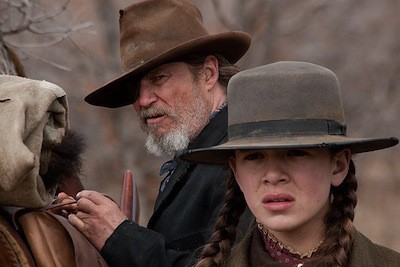 I've been avoiding writing this review for a couple of hours now. I kind of don't want to start typing and thinking too hard about True Grit. I'd rather just sit and bask in how perfect it is, and how effortless the Coen Bros. made that perfection look. It's like in baseball when you don't talk about a no-hitter when the game is in progress because you don't want to jinx it. The luster around this cowboy movie is just too wonderfully shiny.

The Coen Bros. continue what has to be the most incredible string of great films in motion picture history by writing, directing, producing, and editing a remake of the 1969 John Wayne classic True Grit. Both films are based on a novel by Charles Portis, and both share essentially the same plot. The Coen update doesn't stray too far from the outline of the Henry Hathaway predecessor, yet every repeated scene is given added depth. The Coens mine the darkness that was under the surface of the original, coming up with a more powerful tale and also finding even more humor than even the Duke managed in the often light-hearted chase picture.

Hailee Steinfeld stars in the new True Grit as Mattie Ross, the 14-year-old girl whose father was gunned down by Tom Chaney (Josh Brolin), the outlaw he tried to help onto the straight and narrow. Convinced that the law won't move forward without her encouraging it, Mattie hires Rooster Cogburn (Jeff Bridges), reputed to be the meanest hair-trigger in the U.S. Marshals. Cogburn is a cantankerous drunk who'd rather shoot a fugitive than bring him in alive, but he gets more than he bargained for when he takes Mattie's case: the fast-thinking, fast-talking little girl wants to come along on the manhunt. Also coming along is a straight-laced Texas Ranger (played cleverly by Matt Damon). His name is LaBoeuf, spelled like Shia's last name but pronounced "Le Beef." He and Rooster don't get along, particularly as Rooster warms to Mattie. They pursue Chaney and his criminal pals through Indian country, and things get tangled every which way as they do.

True Grit is a masterful execution of tried-and-true genre material, putting proof to the axiom that even if there are no new stories, there are new ways to tell them. True Grit functions as an old-fashioned western, but it plays like a reinvention of the same. It is at once everything we know about the cowboy picture and everything we've always wished modern westerns could be. It's not revisionist, it doesn't shoehorn a ponderous conscience into the narrative or dismantle the black-hat/white-hat morality. It's a hell of a thing. The horse opera hasn't been this vital in a long time.

There is not a name in the credits that is not performing at the top of their craft. Hailee Steinfeld is a true find. She makes the precocious Mattie believable. She is obstinate and a little foolish and the actress nicely captures the slow transformation the girl goes through, from naïve idealist to a young woman who has seen some heavy stuff in a very short time. Steinfeld easily improves on the unconvincing performance Kim Darby gave 30 years ago. It probably helps that, unlike Darby, Steinfeld is actually a teenager. 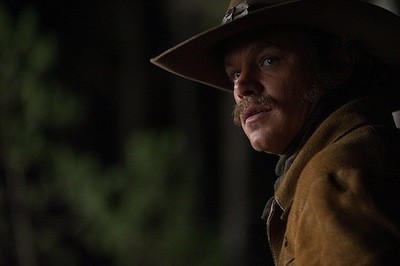 While Steinfeld plays Mattie rather straight, as befitting her character, the oddballs that surround her give their roles a little twist. Matt Damon is subtly lampooning the goody-good lawman figure, while Josh Brolin gives us a surprise by undercutting Chaney's penchant for violence by affecting a slightly askew accent. Barry Pepper is the only actor who really reminded me of the '69 Grit. Robert Duvall originally played the head thief Lucky Ned, and there are traces of the same sinister edge in Pepper's presentation.

The man who towers over this movie, though, is Jeff Bridges. As an actor, Bridges gets more and more powerful the older he gets. His Cogburn is hilarious and oddly touching. Bridges' gruff delivery is balanced by the character's regular bemusement. He also gets to indulge in some hysterical drunken pantomime, and then flip that around and play the hero. In the final reel, Rooster puffs up his chest and becomes the savior Mattie wanted him to be, and the transition is so deftly handled, foreshadowed as it was in Rooster's apparent bragging, that it's all the more exciting to see him step up.

The Coen Bros. shot True Grit with their longtime collaborator Roger Deakins. The cinematographer keeps his camera nice and steady throughout, he lets the timelessness of the material dictate an even-handed visual style. As per usual, the result is gorgeous. True Grit is meticulously designed in its period details, with careful touches added to the different characters' wardrobes to give each of them a look as unique as their personality. The Coens aren't playing dress-up here, they are taking the work very seriously, and it lends even more heft to their tale. Watching the 1969 version of True Grit a few weeks ago, I couldn't help but think there was so much more story just under the surface of what was shown. There is a coarseness to the base story that is smoothed over. For instance, that movie's final scene resorts to mawkish sentimentality, whereas this one caps it in a way that maintains the integrity of its central personalities.

And yet, I still feel that the two True Grits could easily sit side by side and neither is lessened by the existence of the other. Sure, this True Grit is vastly superior to John Wayne's, but the Coens are never snotty about it. While other directors do remakes and run roughshod over the source material, the Bros. thought about how to make it stronger and smarter while also retaining the essential aura that made it all work way back when. The finished project, I don't know, just feels right. In much the same way that Rooster's stalwart spirit can never fully be disguised by his boozy antics, the staunch narrative spine of True Grit isn't buried under the Coen Bros.' quirks. Rather, their unique point of view only enhances it. 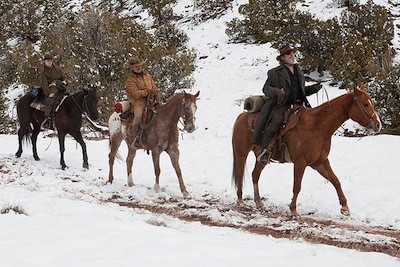