"People sell themselves in different ways." 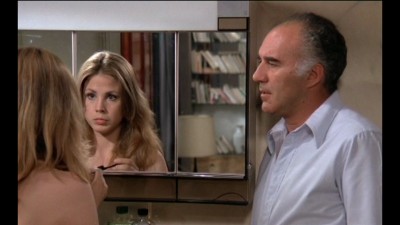 In a corrupt, ruthless, dog-eat-dog world, are the bonds of friendship and loyalty more important and reliable than the fleeting connections of passion and romantic/erotic love? That is the rhetorical question posed in Claude Sautet's (Classe tous risques) Mado, a clear-eyed, somber, yet surprisingly sweet drama masquerading as a sort of noirish thriller. The film recounts the misfortunes of Simon Léotard (Michel Piccoli, Contempt, Dillinger is Dead) and his unique relationship with Mado (Ottavia Picolo), a prostitute whose services he avails himself of, who also acts as his buddy, moral conscience, and advisor in difficult times. Simon is a real estate developer whose business partner has committed suicide after having irretrievably indebted them to M. Lépidon, a corrupt competitor who means to undermine their enterprise by any means necessary. A toughened, world-weary old hand at the vicious games of the business world, Simon finds himself in real need of Mado and her loose group of idealistic, unemployed or wage-slaving acquaintances--"little people," as they're thought of by Simon and his business-class echelon--who can offer him ideas, knowledge, and aid as he maneuvers to save his business and turn the tables on M. Lépidon.

The film has the ingredients--scheming, espionage, blackmail--of a good, old-fashioned, black-hearted noir, but the tone and emphasis with which the adroit Sautet (who co-wrote the script with Claude Néron) approaches his characters and their obstructed desires is notably lighter and more intimate than it is hard-boiled. The relationship between Mado and Simon is, yes, that of prostitute to client; but here, that just means that their sexual relationship is cool, businesslike and mutually agreeable, whereas, on the platonic level, the two actually care and look out for one another, however tersely they might squabble and however scrupulously they might avoid displaying their genuine affection. We are given some of the fascinating, nasty particulars of corruption and double-crossing among public officials and exploitative entrepreneurs, and we witness the innuendoes and threats of guys in suits playing blackmail hardball; but, as if to buffer the depictions of accusation, menace, or implied violence, they are always alternated with scenes like, for perhaps the best example, the long sequence that depicts Simon's visit to his late colleague's widow, Hélène (a supporting star turn by the legendary Romy Schneider), whom he sincerely wants to rescue from her grief-induced alcoholic self-destructiveness. And despite Simon's eventual development of deep, absolutely unrequited feelings that extend beyond friendship for Mado, he is guilt-stricken by when she sacrifices, on his and his business's behalf, a man who is both her true love and the key to bringing down M. Lépidon. In Sautet's depiction of events, Mado's selfless gesture and Simon's pained conscience at knowing she did it for him are more important than the outcome, positive or negative, of their plans. 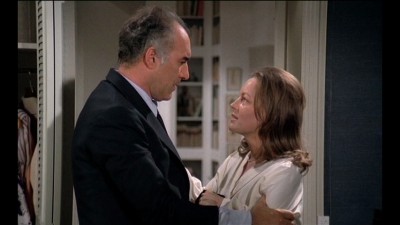 Sautet's style is restrained, minor-key, and thoughtful, but not showy in any way. Phillip Sarde's melancholy, jazzy score is both spare and sparely used; silence and sound are balanced to good effect, subtly enhancing the slightly desperate, day-to-day feel of the characters' lives. The lighting and compositions Sautet gets from DP Jean Boffety are naturalistic, edging toward grittiness without ever completely crossing over; the images teeter right on the line between coolness and warmth, creating a very apt visual aura around the pragmatic, fatalistic, but not cynical or unkind people whose fates we are watching unfold.

The film's unusual mixture of tones is risky, and the mixture does not always evade awkwardness. But overall, Sautet is remarkably successful at smoothly shifting our attention away from the obligatory material aspirations and dealings of his characters and toward their human feelings, the responsibility they feel (though they may not express it) for one another. He ends the film not with any resolution or reassurance that our dreams and ambitions can work out, but with a gentle, empathetic sense of half-hopeful resignation. The characters cannot even come close to doing all they would really like to, for themselves or each other; but despite that disappointment, they will do what they can, and there is some small, unspoken glory in that. 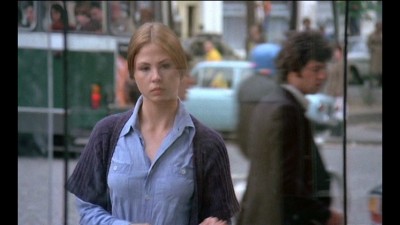 
The anamorphic transfer of Mado at its original aspect ratio of 1.77:1. The image is adequately clear and vibrant (most of the grain can probably be attributed to the film stock of the time), with the film's mostly muted color scheme coming through well, but with a somewhat dulled quality overall and some aliasing throughout. Which is to say that the transfer, while certainly passable, is something less than top-notch.


The mono sound mix of the original film is basic, requiring nothing more than clearness and crispness of dialogue and incidental sounds, all of which comes through perfectly on the disc's Dolby digital 2.0 soundtrack. 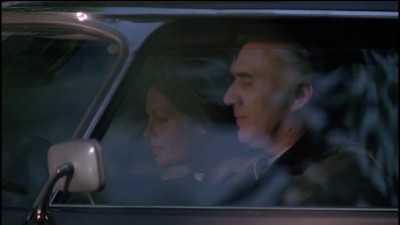 
Mado's title character, a prostitute, does not exactly have a heart of gold, and none of the characters' questionable actions or compromised ethics can really be said to be redeemed. But Claude Sautet's film is a nicely observed, more moving than thrilling rendering of all those gray areas in which most of us struggle to get by without sinking completely into the black. Mado has noir character types (shady real estate dealers, corrupt officials, prostitutes) who do not really have noir personalities, and that unexpected juxtaposition leads, mostly, to rewarding insights and subtle, sensitively captured moments of connection and understanding. It is a film that pushes the human dimension to the fore of its suspenseful scenario and wears its heart, if not exactly on its sleeve, then in a place where we can get clear glimpses of it. Recommended.