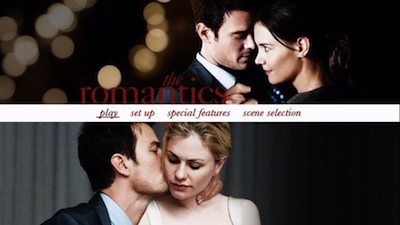 Memo to Filmmakers: Toasts at wedding rehearsal dinners are like cinematic gangrene. They creep into your movie and they stop all living tissue dead. You think they are a clever and effective way to humorously introduce audiences to your characters, but in truth, it's a forced familiarity, like we're the party date for someone we just met and it's awkward to be around his or her friends. Wedding toasts are awkward and boring in real life when you actually know everyone, and if you've ever seen someone's wedding video, they are even worse when replayed. Yet, directors fall in love with these scenes and they go on too long--in fact, I think they are still shooting the rehearsal scene for Rachel Getting Married. That's how long it is.

The toast scene in Galt Niederhoffer's The Romantics isn't that long, but it does have the expected whiff of poison. The writer/director's story centers around a group of eight college friends who have nicknamed themselves "the Romantics" because, apparently, they are an incestuous and ribald bunch, having fallen in and out of love with one another over a friendship that has spanned ten years. This claim is borne out by the fact that of the eight, two have already married each other, another couple will be married later in the year, and the more immediate soon-to-be marrieds, Tom (Josh Duhamel) and Lila (Anna Paquin), started dating after he had broken up with Lila's maid of honor, Laura (Katie Holmes). What Lila doesn't know, or what she refuses to admit, is that Laura and Tom still carry a torch and get it on from time to time.

The purpose of this toast is to cut through this convoluted social dynamic. Each character will stand up and say something that will tell us who they are. Pete (Jeremy Strong) is Tom's rival, and so he talks about their personal records in swimming. Tripler (Malin Akerman) is the sloppy free spirit, so her toast rhymes. It's supposed to be a short cut, but instead it distances us from these characters. They become types, and thus we realize that we really know all we will ever know about them right there, and thus our investment is cut short. Plus, Elijah Wood, as it turns out, is absolutely awful at pretending he's drunk. He plays Lila's little brother Chip, and his toast is supposed to be embarrassing because he says the things he's not supposed to say; instead, it's embarrassing because it makes us think Frodo's lips have never truly touched alcohol. 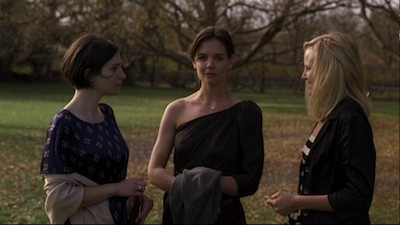 The rest of the story mainly takes place over the night before the wedding. Lila disappears to her room, and the rest of the gang continue to drink and carouse. Tom's cold feet cause him to disappear on the rather large seaside estate owned by his in-laws--a convenient set-up for a bad speech about how Tom is scared of the ocean, not to mention all the other things this is a convenient set-up for. The couples disperse, switching partners as they go off hunting for their lost groom. Predictable things happen, though none of them very deep or sexy. Tom and Laura get a scene to air all of their fears and hurt feelings, and there is some nice interplay between Duhamel and Holmes, but most of it doesn't really scan. The words sound good, but there isn't much feeling behind them.

Which I'd say is the real problem of The Romantics. It has many wonderful elements. The acting is, surprisingly, uniformly good, and the writing has a nice polish. Niederhoffer, who has an extensive back catalogue as an indie producer, wrote the script based on her own novel, and she has a good ear for articulate people engaging in conversation. These are all well-educated folks, living in a world a few rungs down from the more erudite climate of Whit Stillman characters. (The Romantics owes so much to Stillman, they should probably pay him royalties.) At the same time, no one really says anything. It's all the right words, they are all placed in the right order, but there is nothing more to them than their arrangement on the page.

Rather, the actors all put on their assigned vocabulary in the same way they put on their wardrobe. This struck me as I was watching Josh Duhamel preparing to bite the bullet and go back in the house and see Anna Paquin. I wondered why he stood outside the door tying his tie. What exactly was this meant to say about Tom? Is it that his cleaning himself up is intended to signal he's not really going to go to his fiancée and lay his soul bare? Or is it more likely that the actor just needed a little piece of business to get him through that door? I'm leaning toward the latter. Because it occurred to me that Josh Duhamel didn't pick out that suit, someone put it together for him. It hangs very well on his frame, but it doesn't have the appearance of really being lived in. It's a costume.

So, too, is the dialogue draping for the scenario these actors find themselves in. Sure, this is the case with all movies, but Galt Niederhoffer missed the final step somewhere, that point when the illusion stops being a convenient excuse to make a movie and becomes something meaningful. The set-up works, it's just that there's only hollow space underneath.

I suppose this is why Anna Paquin's character, the bride, is the most interesting thing in the movie. Lila spends most of The Romantics by herself, indulging in night-before rituals like sneaking chocolates and cigarettes and putting on face cream. Most of her role is behavior rather than verbal expression, and so we get to just watch. It doesn't hurt that Paquin is lovely--much is made of her "perfect breasts" by the other characters in the movie, but I was more fixated on her immaculate shoulder blades--but an actress who is merely pretty isn't that interesting to watch. It's that Paquin is a very good actress and so creates an inner life, and just by watching her, we can extrapolate all the things she is thinking about--which are exactly the same things that Duhamel tells us his character is thinking about only to have the words fail him. (Ironically, you'll realize, when you hear Tom's wedding vows.) It's why when the two of them do talk, Lila suddenly comes off as the deepest soul in the movie, despite having the same writer as everyone else.

It's tough to hate on The Romantics with any great vitriol. It's not a terrible effort, nor one that feels particularly lazy. It's more that it feels like the filmmakers stopped workshopping it too early. Granted, it really falls apart at the end, with too much forced symbolism--the nervous groom fumbles with his tie, literally unable to tie a knot; a rainstorm hits as the ceremony is just beginning--but had there been more going on to get us to that point, Niederhoffer could have probably gotten away with it. You can sometimes fumble it at the finish line when you've run hard to get there. Instead, it's as cliché as the rest of The Romantics has led us to expect and we've long since passed caring enough to get mad. 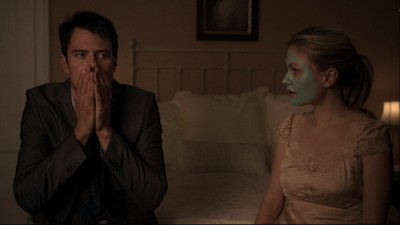 Video:
The widescreen image for The Romantics is fairly average. The colors generally look good, and the foreground resolution is solid. At times, the background lacks definition, and there is a hazy shimmer. Some of the darker scenes and some of the outdoor shots also have too much grain that I thought might be the result of shooting on digital, but IMDB says the film was shot on 35mm, so I am not exactly sure. It might just be natural lighting, it doesn't particularly feel like DVD error.

Sound:
The 5.1 audio mix on The Romantics is very good, with strong ambient work. The dialogue is given the full force up front and down the center, but the action takes place out in the open, away from the city, and there are a lot of great nature sound effects that play off to the sides and in the back. The music also sounds really good, including excellent cuts from the Bird and the Bee on the soundtrack.

Alternate language choices include French and Spanish dubs (both also in 5.1), as well as subtitles in both languages. There is also a Closed Captioning option for English-language speakers.

Extras:
There are some studio trailers--though not one for The Romantics--alongside a lonely 11-minute "Behind the Scenes" promo reel. It features the cast and Niederhoffer discussing the movie alongside scenes from the film and a bare minimum of on-set footage. Cursory and not very revealing--just like the movie.

FINAL THOUGHTS:
Rent It. Though not horrible by any means, The Romantics does fall short of being very good. This story of college friends the night before a pair of their own are supposed to get married and the emotions this stirs up has some deep things to say about love and ambition, but writer/director Galt Niederhoffer never quite figures out how to say them. The ensemble cast of young actors does a good job with the material given, but outside of Anna Paquin, none really distinguish themselves one way or the other. Paquin's role, not surprisingly, relies a lot more on silence, and suggests that maybe if The Romantics did a little less talking and got on with just being, all involved might have found a little more success with it. Also, next time, try getting Elijah Wood drunk for real. Seriously. 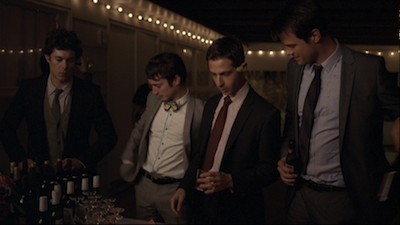