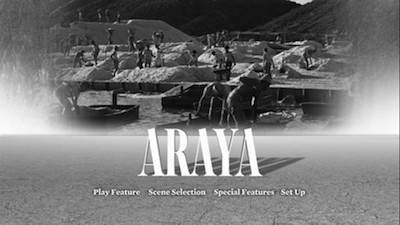 There are a couple of different ways Margot Benacerraf's 1959 film Araya could be referred to as a cinematic time capsule. For one, it preserves a way of life that, at the time, was quite possibly going to disappear, thanks to the ever-expanding reach of industrial technology. For another, despite winning accolades around the world, including a prize at Cannes, Araya fell off the map until a theatrical restoration and re-release in 2009. This rediscovery lead to a new appreciation of Araya, a compelling appropriation of the documentary format, turning real life into filmic poetry.

The Araya region was a peninsula in Venezuela known for its extensive salt marsh. The Spanish stumbled on it in 1500 A.D. and quickly began to exploit its natural resources. Araya opens with a quick history lesson, with Benacerraf filming the ruins of a fortress that had been built to stave off pirates. The film jumps ahead 450 years from there, training the camera's eye on a large working class community that lived and labored in the salt fields. Benacerraf follows several different families, moving up and down the generations, and showing how they all earn their way in the region. Some men fish, some women sell that fish. Others make pottery. The bulk of the workforce mines the salt, an involved and tedious process of extraction, transportation, and refinement that leaves most of the workers tired and broken. Conditions are harsh, and salt in great quantities can have toxic effects. 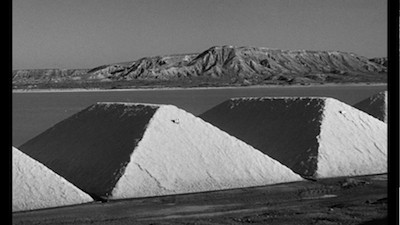 Benacerraf and Giuseppe Nisoli shot their film in black-and-white, using natural light and essentially creating a look not dissimilar to journalistic photographs of the time period. They chronicle all aspects of existence in the region, almost literally taking us from the cradle to the grave and all points in between. Recurring characters emerge, as does the thematic tedium of the job. There isn't much else to do around Araya but work. One little girl collects seashells, and that seems about the closest any of the locals get to outside entertainment. Though by all appearances Araya is a documentary, Benacerraf served as more than a simple observer, arranging the scenes as she saw fit. She crafts a narrative profile of the land and its people, adding commentary via voiceover (José Ignacio Cabrujas narrates the Spanish version, Laurent Terzieff narrates the French). This commentary never gets heavy handed, however, not even when Araya reaches its final scenes. Benacerraf makes certain suggestions, but her intentions are never explicit; Guy Bernard's lovely musical compositions do more to lead the viewer toward certain emotional conclusions than any of the words in Benacerraf's script.

In some ways, Araya reminds me of Mikhail Kalatozov's seminal I am Cuba. Both films blend traditional reportage with cinematic staging to create a flickering portrait of a way of living, using a disembodied voice to add flavor, but mostly letting the pictures speak for themselves. The black-and-white photography is often dreamy and otherwordly--the look of it also reminded me of Agnes Varda's La Pointe Courte--particularly as the workers walk across the white mountains of salt, nomads on a crystalline desert. The arrangement of the scenes works as a visual symphony, lulling the viewer into an instinctual, analytical state. It's voyeurism, but in a way that is far more empathetic than the regular peeping-tom approach of more confessional documentaries.

One of the most memorable images from Araya is of the old woman and her young granddaughter visiting the graves of those lost on the peninsula. Since the soil won't support plant life, they use seashells instead of flowers, creating a rock hard garden in tribute to the people who lived just as hard in service to the region. It's an enduring image, one that is hard to shake. This scene is the heart of Araya, a solid record that itself will endure. 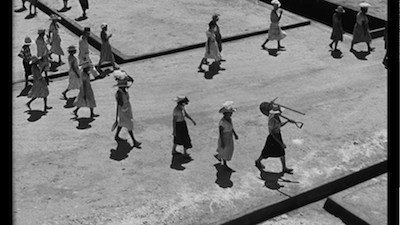 Video:
Araya is released on DVD by Milestone as a widescreen black-and-white image at a 16X9 aspect ratio. The restored image looks fantastic, you'd hardly have any idea that this was a film left to gather dust for almost fifty years. The resolution is sharp and there is no instances of dust or dirt. There might be a scratch or a line here or there, but you wouldn't need more than one hand to count these instances. It's a good looking disc, giving the beautiful photography the showcase it deserves.

Sound:
The mono Spanish soundtrack has a surprisingly deep sonic field, with good balance between the music and the live ambient noise from the island. The alternate French soundtrack sounds a little more tinny and also has the wrong character for the movie; stick to the Spanish.

Subtitles are in yellow and can be turned off.

Extras:
Margot Benacerraf only ever made one other film, the 1953 short documentary (23 minutes) Reveron, profiling the Venezuelan artist. His life is shown mostly through his art, though unfortunately in black-and-white so we miss the color in his brush strokes. It's an impressionistic biography of an impressionistic painter, one that celebrates the work as the most essential detail in the creative existence. 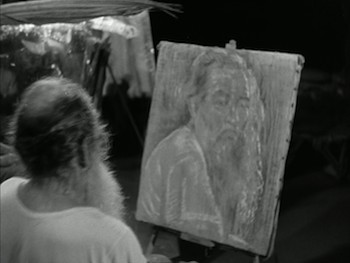 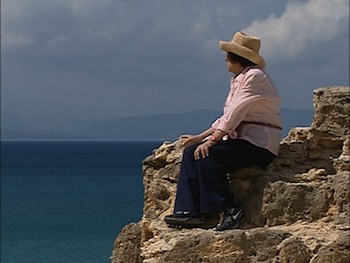 The rest of the extras focus on Araya, including the American trailer for the film. The short Antoine Mora-helmed profile The Film of Her Life (16 minutes, 25 seconds) takes Benacerraf back to Araya 50 years later to look at the landscape as it is now and reflect on the making of this feature, which is still considered a landmark in Venezuela. The technique of documentary being orchestrated as fiction is explored, and some of the actual participants/actors are found living nearby. Benacerraf also talks at length in the 10-minute television segment "Moving Paintings" and the extensive 24-minute "Margot Benacerraf: mas alla de Araya," a more comprehensive look at her life and featuring outside commentators analyzing her personality and work.

Both the main feature and Reveron have audio commentaries, featuring the director in discussion with one of the members of Milestone Films. He keeps her talking, and they get into great detail about both productions, as well as Benacerraf's background and how she developed as an artist and storyteller, including seeing films at the Cinemateque in France, her "film school." (A third film about Picasso is mentioned, but I don't see any record of it, so am not sure how or if it was ever released.)

Two features are accessible through your computer. One is a pdf of the Araya press kit. The other is called "From the Files of Margot," and it is a pdf scrapbook of photos of Margot, as well as photos from the set of both of her films.

FINAL THOUGHTS:
Highly Recommended. Margot Benacerraf's 1959 blending of documentary and expressionistic filmmaking Araya is a fascinating, engrossing, and highly involving portrait of a community workforce laboring in the open-air salt mines in Araya, Venezuela. Poetic and understated, Araya shapes its observances into a movie that inspires empathy and investment on the part of the viewer. The Milestone restoration looks remarkable, and the extra features expand on how one understands the film and filmmaker. It's a nontraditional movie showing a traditional mode of living, questioning the incoming mechanization and what that would mean for the people Araya depicts--thus, all the more poignant that it would be rediscovered and re-released in this modern technological format. 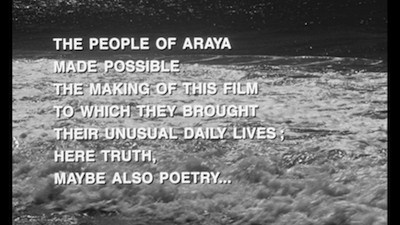