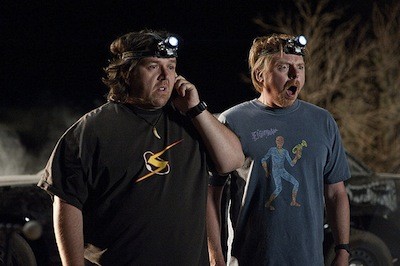 As it turns out, there apparently isn't a worn-out genre Simon Pegg and Nick Frost can't make good again. Based on concept alone, I thought Paul, their movie about two nerds who find an alien on their trek through America, sounded a bit dodgy, and the early promo seemed only to back that up. Now that I have seen and laughed my way through the film, I am sorry I ever doubted the boys. Hell, based on Paul, I'd go see a movie where they switched bodies with little kids. If anyone can make it work, it's them.

The pair wrote and star in Paul, which does for E.T. and Close Encounters what Shaun of the Dead and Hot Fuzz respectively did for zombie and buddy cop films. Unlike those two earlier movies, Pegg and Frost aren't working with director Edgar Wright on Paul, and though the absence of Wright's visual wizardry is definitely lamentable, the comedy duo still has enough wit and winning charm all on their own that it doesn't entirely matter. Plus, Paul is helmed by Greg Mottola, the man behind the camera for Superbad and Adventureland, and while there are times when it feels like he can't quite keep up with the pace the material demands, it's nice to see the filmmaker stretch beyond the earthbound parameters he's known for.

Paul opens at Comic Con, where sci-fi writer Clive Gollings (Frost) and his artist pal Graeme Willy (Pegg) are kicking off a vacation driving across the U.S. looking at famous UFO crash sites. Clive had some success with his first book, but he's had almost two decades of wrestling with the sophomore slump. He and Graeme aren't really guys who get things done. They are cowards who run from confrontation, perfectly happy with taking pictures of themselves standing several feet away from their admirers instead of getting in close.

That is until fate crashes its car in front of them on the highway. A black sedan cuts off their rented RV and tumbles off the road, and when they pull over to check for survivors, they discover that the driver was a tiny green alien named Paul (a computer-generated creature voiced by Seth Rogen). Paul is on the run from the government, which has decided he has fulfilled his usefulness and are ready to begin a real alien autopsy. The spaceman convinces Clive and Graeme to take him on board their craft and drive him across country to get to the rendezvous point where his alien brethren will pick him up. What follows is an old-fashioned chase picture, with the FBI (played with hilarious variation by Jason Bateman, Bill Hader, and Joe Lo Truglio) behind them and the whole of Middle America in front of them. They meet all manner of kooks along the way, from homophobic rednecks to karate-kicking children and religious nuts, and the cast is filled from top to bottom with excellent comedians. Jane Lynch, David Koechner, Blythe Danner, and the predictably delightful Kristen Wiig all have supporting roles, and there are also several surprise cameos, including one that appears only as a disembodied voice, but is, in fact, the real deal. (And, no, not the disembodied voice that eventually shows up in person, the other one--though the one that shows up is obviously real, too.) 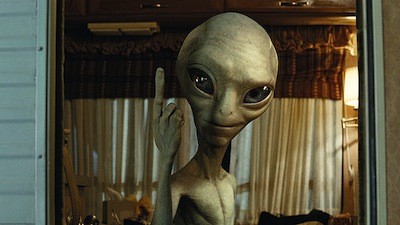 Paul works on many levels across its running time, but it mainly hammers on two major ones. On one of these, it's a zany science-fiction send-up. Film nerds will have a blast identifying all the references and appropriated lines. Some are obvious, some more obscure, but all of them are slyly woven into the story so that they enhance the laugh track without distracting from the second level.

The second level is the relationships between the characters. At the core, of course, is the friendship between the two travelers stuck in their dreams but lacking the gumption to do anything about them. Simon Pegg and Nick Frost are an awesome comedic twosome, and their act only grows more refined. Though some of the "we're not gay" gags are a little tired post-Hot Fuzz, they still manage to portray a genuine friendship that comes across as "lived in." Yes, it's a friendship they have in real life, but it takes a lot of hard work to be yourself on screen and make it look natural, particularly when you have to be yourself on cue and with such excellent comic timing. Their back-and-forth go a long way toward making Paul so fresh.

The surprise element that is added into this mix is Rogen. I'll admit, it was the alien that had me the most worried going in, and Rogen's highly recognizable voice took a little getting used to coming out of Paul's digitally manipulated mouth, but it's only a couple of scenes before it all starts to click. Rogen being corralled by a good script isn't a bad thing (one assumes there is less ad libbing when the character has to be animated in post), and even with that restriction, the actor gets a lot of great lines. The effects team seamlessly inserts their creation into the real environment, and there is never a point where Paul comes off as false or half-assed. It's clear they also worked with Rogen to capture his mannerisms and even some of his facial expressions. The best compliment I can extend is that eventually I forgot I was watching something that didn't really exist.

Paul covers the well-worn thematic ground of being about two guys stuck in a rut who find themselves through unexpected adventure. It's tried and true and it still works. The one-liners and satirical observances Pegg and Frost drape on this familiar skeleton are sharp enough that the formula has yet to grow stale. There is even a daring undercurrent of pro-science commentary that gives Paul an added layer for audiences to chew on. It could've seemed like there were a lot of stray elements being crammed into one movie, but the script handles them in such a way that they end up being all of one piece.

Truthfully, I enjoyed myself so much watching Paul, complaining about anything makes me feel like an awful spoilsport. Yes, it's a little slow to get going, and yes, Greg Mottola could have done a better job of matching the dialogue and plot references with more interesting visual lifts from classic sci-fi flicks, but most audiences aren't going to care about that. And rightly so. Paul is going to make you laugh, whether you know what it's lampooning or want to think about all the different aspects of its story or just would prefer to roll with it as it comes. I call that a comedy win. 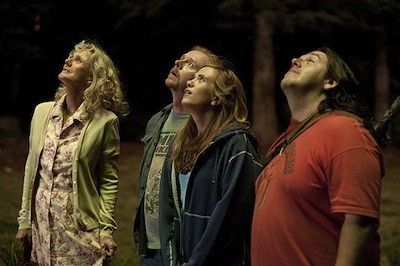