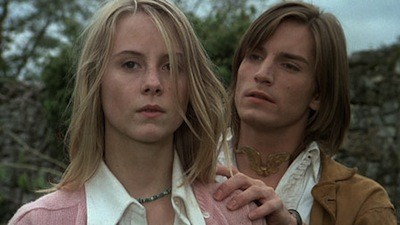 If one applies the word "nonsense" as its literal dictionary meaning, then Louis Malle's 1975 surrealistic pill Black Moon doesn't really fit. There's an obvious method to the madness here. Images reoccur, veins of expression expand, Malle builds his dream world by dismantling our own brick by brick. He presents his vision in the form of a journey, a road trip by car and then by foot, and into a realm where the magical and the mundane have swapped places. Unicorns are real, grandmother is not.

The central figure in Black Moon is Lily (Cathryn Harrison), a lone figure wandering a topsy-turvy wasteland. Blonde girl lost in a dreamscape: the Alice comparisons are obvious and intentional, though Malle has dropped her in the middle of Jean-Luc Godard's Weekend rather than any Wonderland. In Malle's wilderness, the human race is at odds. Packs of soldiers roam the countryside, committing summary executions of their enemies. No source of conflict is stated, though we can surmise that divisions have erupted along class and gender divides. Lily runs from anyone with a gun, it doesn't matter whom.

That's how she ends up at a secluded house in the middle of the forest. An old lady (Thérèse Giehse) lays in bed on the top floor, speaking gibberish into her wireless radio. A pair of siblings--a handsome brother (Joe Dallesandro) and pretty sister (Alexandra Stewart)--silently keep her house together and take care of her. The boy works the yard, the girl literally feeds her from her breast. Lily gets stuck there while pursuing a black unicorn. As man has become more isolated from one another, nature has been given rein to run wild. So have children. Innocence is returning. Or maybe it isn't. As a symbol, the unicorn isn't exactly what we expect. The talking horse is judgmental and perhaps is there as an example of temptation itself. Though regularly representing virginity, the unicorn bears witness to Lily surrendering her own purity to a much more common emblem of original sin.

As satire and as surrealism, Black Moon is curiously simplistic while also maddeningly obtuse. It's not as pointed as, say, Luis Buñuel's The Discreet Charm of the Bourgeoisie, which used confined spaces and open roads to expose that, despite their high-falutin' airs, modern society types are still subject to base urges. (Buñuel's daughter-in-law Joyce is credited with "additional dialogue" on Black Moon.) Malle's excursion through the fantastic is a little harder to pin down. The landscape keeps changing, so much so that you'll almost wish you'd began drawing a map when the movie started so you could find your way out. Singular images have potency (one burial of a dead soldier should cause anyone who fears suffocation to get a little anxious, particularly after you see the actor accidentally move under the soil), and there are gags that build and expand (the ever-growing pig). It's also wonderful to look at, as any dream should be, though cinematographer Sven Nykvist lights this headspace so that it appears overcast, a crushing gray always on the horizon. Performances are a little less consistent. Cathryn Harrison carries on stalwartly, but Dallesandro is terrible. He doesn't even speak and he's terrible! Then again, when wasn't he?

Thankfully, for as ambiguous or contrived as Black Moon can feel at times--Malle, really, was better when he was embracing humanity, and I sometimes question his comedic chops (Viva Maria, anyone?)--the movie does have threads that pull through the length of the narrative, and much of what Malle sets up does pay off. (And since this is a dream, not everything has to; sometimes no sense is truly apropos when working with nonsense.) It's also entertaining, shifting and introducing new elements before what came previously can get boring. 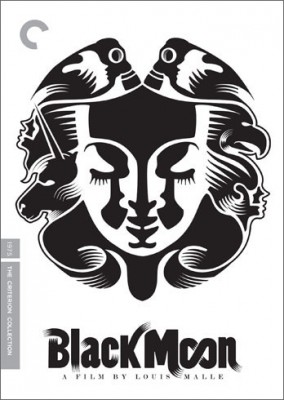 Video:
The 1080p transfer on Black Moon is quite nice, with a conscientious attention to detail and maintaining the naturalistic, often chilled look to Nykvist's photography. Through listed as 1.66:1 on the packaging, the image itself doesn't quite fill the screen, my TV had thin black bars on the left and right--not a problem to those of us with years of experience watching letterboxed images. The print is otherwise clean with no instances of digital distortion and sharp resolution throughout.

Sound:
The default option for audio is an uncompressed monaural English language soundtrack. Though there is not much atmosphere to the track, it presents the material in a clean, clear manner. Black Moon actually has very little dialogue, so most of the audio landscape is literally taken from the landscape--nature sounds and the like--and everything can be heard just fine.

An alternate French-language track is offered, recorded at the time of production. There are optional English subtitles for those choosing to watch the French version, and there are also subtitles for the deaf and hearing impaired on the main audio.

Extras:
Criterion has put out Black Moon with a nice interior booklet featuring credits, photos, and an essay by Ginette Vincendeau. Art is by Yann Legendre, tying this BD in with Criterion's other recent Louis Malle release, Zazie dans le metro.

On-disc extras are slim: a short interview with Louis Malle on French television (just over 12 minutes), an extensive photo gallery, and a theatrical trailer.

FINAL THOUGHTS:
Recommended. Louis Malle's 1975 surrealist fantasy Black Moon showcases an obtuse Alice wandering an ambiguous Wonderland. His vision of a world where society has broken down and where traditional codes and symbols have been upended moves briskly and has an impish undertone, even if its full meaning isn't immediately clear. I am sure some will find it insufferable or precious, but if you feel like jumping in a rabbit hole--or an open grave--Black Moon can prove to be particularly entertaining.