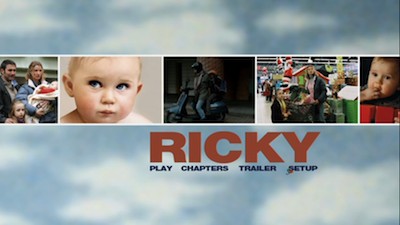 Okay, this is a tricky one. All the promotion around the 2008 Francois Ozon family comedy Ricky does its best to make sure you don't know what is so special about the little baby boy whose face appears on the cover. I didn't know what this movie was about when I started watching it, and while I was surprised by where it went, I wasn't surprised. Still, what to do when reviewing a movie that has worked so hard to obscure what makes it so different to begin with? Bite one's tongue, I guess.

What you can know: Katie (Alexandra Lamy) is a single mom, raising her seven-year-old daughter Lisa (Melusine Mayance) on her own. To make ends meet, she works the assembly line in a factory. There, she meets Paco (Pan's Labyrinth's Sergi Lopez), a Spanish immigrant. They have sex in the bathroom, and Katie gets pregnant. The pair is overjoyed, and Paco moves in. Ricky is born, and things get difficult. Paco works nights so he can stay at home with Ricky in the day, and the long hours make both parents testy. When bruises appear on Ricky's back, Katie accuses Paco of child abuse, and he leaves. Then Katie and Lisa discover what those bruises are. They are something magical. Then everyone else finds out, too.

Francois Ozon is known for directing adult movies like Swimming Pool and 5X2, as well as frothy farces like his most recent, Potiche. He is not necessarily known for making family pictures, but really, Ricky is just such a movie--albeit with a French sensibility. (Hello, Alexandra Lamy's boobs!) It's a fairly light-hearted film about extraordinary circumstances and learning to cope with these circumstances as a unit. Being a trickster, Ozon plays with our expectations a little. He does give us hints of menace early on, including making us wonder if Lisa's jealousy of her little brother has sinister undertones. Composer Philippe Rombi even teases us with patches of music that sound like cues from The Twilight Zone; his pastiche of John Williams in the back third of Ricky fits this film much better.

Honestly, I think the producers are selling this movie to you all wrong. I watched the trailer today to see if they show the little baby in full, but all they do is hint at Ricky's condition. Rather obvious hints if you know what it is, but maybe not if you don't--especially since the trailer rather dishonestly leads you to believe that Ricky could be a horror film or a thriller. It's neither. It's more Into the West than it is Orphan. And the "mystery" isn't that hard to guess as soon as you see Ricky's wounds. I figured it out well before the kid's own mother.

Suffice to say, Ricky is a cute, often inventive, and certainly entertaining modern fable. It's well acted, nicely shot, and the special effects are pretty good. If you have a kid who doesn't mind reading subtitles, and you don't have issue with him or her seeing a little heavy petting and the occasional breast, then Ricky could be a fun flick for the entire clan to enjoy. Adults on their own may find it a little slight, but a pleasant diversion, and in that way not unlike Ozon's more girly comedies.

And for those of you dying to know what Ricky is all about, the big SPOILER is given below. I have typed it up in white, so you have to highlight the text with your cursor to read it.

Ricky grows two wings out of his back and learns to fly. Why they don't want to tell you that, I don't know. Seems like the major selling point, really. 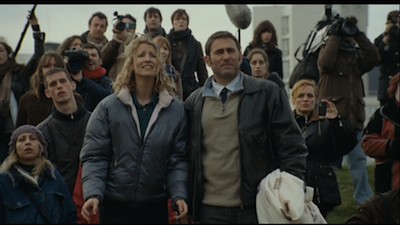 Video:
IFC have done a fine job bringing Ricky to DVD. The 1.85:1 anamorphic transfer is clean of any blemish or pixilation, the resolution is strong and the colors excellent.

Sound:
The original French soundtrack is mixed in 5.1 and it's a fairly good mix. Most of the action is in the front speakers, but there is still some left to right interplay and the tones are clear and the overall sound very good.

There are optional English subtitles that read very well, and there are also Spanish titles and a second English track geared toward the deaf and hearing impaired.

FINAL THOUGHTS:
Recommended. Ricky is an odd duck in the Francois Ozon canon, and a hard movie to review without upsetting the marketing apple cart. In a nutshell, this is a family comedy about a baby with a special secret, and as the story unfolds, little Ricky's family must come together to deal with his gifts. It's fun, with a few adult tweaks. Ricky makes for good light viewing. 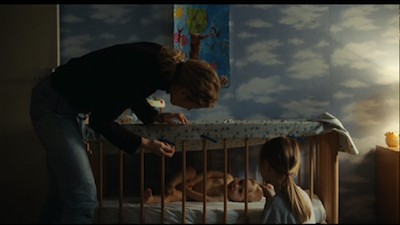